Hello all… I hope to gain an insight into how the speeds and feeds are specified for each new cutter. I have about 35 cutters to add to the library so a couple of dumb questions at this end of the process will help me further along the line.

The library addition is this one: 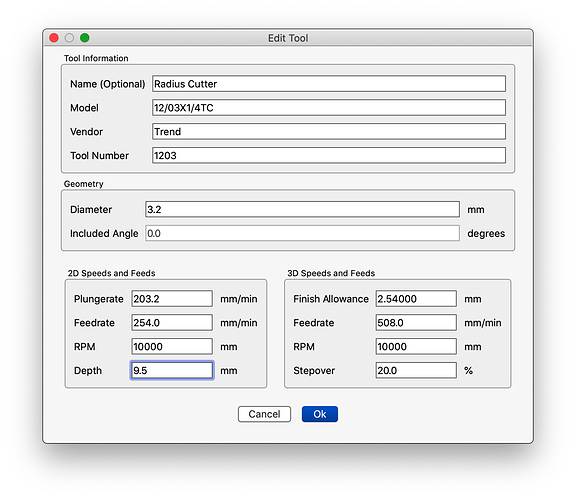 Under the 2D column
Question 1. The included angle field does not accept any input - am I missing something?
Question 2. How are the Plungerate and Feedrate calculated?
Question 3. The cutter can be used at up to 28,000 RPM - how is this entry decided upon?

Under the 3D column
Question 4. Please explain the finish allowance to me

I am working on a small piece that has shallow slots cut 2mm deep. I can see how to draw them, position them and lay them out in CC. I wonder about the 3D aspect of adding a graduated end to each channel. The sides would be perpendicular but graduating the ends for easy removal of tiny pieces from the channel would be a nice refinement.

I have the free version of CC Pro and I can see that the round shape could be specified and added to the toolpath. The small radius cutter I am adding to the library would be used to make the 2mm deep slots as a single pocket and the radius section is only about 1mm deep. Am I trying to use the wrong method and if not, what do I need to consider?

Any assistance for this beginner would be greatly appreciated. I have a project under way and need to add this cutter and the others I bought can be added as they are needed.

Whether the 2mm deep slot works will depend on the material and tooling.

Many thanks Will. Can you add anything for the potentially graduated cut?

No, it’s square, V, or ball-nosed — radius isn’t supported for non ball-nosed endmills — you can enter a radius endmill as a ball-nose and it will work, but the 3D preview will be off by the difference.

As a complete beginner, I have struggled a bit with the arithmetic I need to assimilate for calculating best feed and speed rates. I downloaded the amazing piece of spreadsheet work constructed by @gmack. My first issue was that it was made using imperial values. The complexity of the workbook had me scratching my head for the most appropriate sums to apply in metric terms.

As I do not know what I am doing at this stage, I made a simple spreadsheet (in Numbers… on a Mac no less) to calculate feed rates for 1/8, 1/4 and 3/8ths of an inch cutters for a few materials. This is nothing like the comprehensive work produced by Gerald but it may well suit folk who are new to CNC work and who live on the metric side of the pond.

There are only 5 columns in all. Column A is where you enter the imperial chip load - Column B is where the spindle RPM is entered - Column C is the number of flutes on the cutter - Column D is the derived metric chip load from column A and finally… Column E spits out the required feed rate in millimetres per minute. This lowly spreadsheet will be useful to me in these early days and the limitation to just three cutter sizes is to keep it simple to use.

The columns at the end of some rows detail the materials with the appropriate chip load rate ranges so that looking them up should not be necessary.

The Apple Numbers file (.numbers) and the Excel file (.xlsx) can be downloaded here:

I hope this is helpful.

Thanks for sharing, I think creating one’s own spreadsheet is a pretty good way to learn and remove the shroud of mystery around the feeds and speeds thing. The one I created for myself sits somewhere between yours and gmack’s (closer to yours), I found out that including chip thinning in the formula is important once you start cutting metal using adaptive toolpaths (typically small WOC, large DOC). I happen to use/recommend lower chiploads than yours, especially for aluminium (0.004" is hard to pull off on a stock Shapeoko). I have found out that “manufacturer recommended chiploads” cannot always be applied as is to the Shapeoko, but experience is key / YMMV.

Hello Julien, thank you for your own spreadsheet. I found it to be very informative. My values for chip loads were copied from one of the myriad CNC information pages to be found via Google and I had no idea that they were not especially conservative. I was hopeful that the site, from which I stole them, was a reliable place from which to draw my information.

The spreadsheet needs 5 hearts… the brownie points are for including metric values as well as imperial ones. Curiously, the use of both sets of values seems to be really common in CNC circles (squares?). e.g. The Trend cutter information literature specifies dimensional information in both metric and imperial measurements. Thanks for the reminder… depth of cut, width of cut, chip thinning, climb milling, adaptive toolpaths et al.

Being 72 years of age, imperial measurements used to be second nature to me and I could drive a Zeus data charts and reference tables information book really easily (no batteries required). I was not really comfortable with metric values until about 1990 (they changed in England in 1971) and with lack of use, I no longer feel at ease with imperial measurements. On the other hand, the sometimes seemingly convoluted units were really fine-grained. You could split an old British pound (240 pence) into three equal parts. The new British pound (100 pence) will not permit that.

Part of the initial mystery is understanding a whole lot of new terminology and then trying to work it into one’s embryo understanding of CNC milling. I had not considered cutting metal just yet. I had decided to leave that particular specialist undertaking for at least a couple of days before getting involved.

The thought of tungsten carbide shrapnel flying around my shed after a 30,000 rpm boost from the spindle is not one I wanted to contemplate. I also had no space to build a protective bunker in an 8’ x 6’ work space and standing around in a Kevlar vest while enjoying working with my new Shapeoko machine has no appeal for me.

Thank you once again for keeping me on the straight and narrow (expertly milled) pathway.

My values for chip loads were copied from one of the myriad CNC information pages to be found via Google and I had no idea that they were not especially conservative. I was hopeful that the site, from which I stole them, was a reliable place from which to draw my information

I have been there, browsing multiple sources of online information and ending up being confused by the apparent inconsistencies (and the fact that trying the “recommended” chiploads produced some scary cuts on my Shapeoko), so I finally turned to the best source of info for a Shapeoko: this forum and its members, who have been milling for much longer than I have. We had a looooong discussion back in 2019 about chipload values and where they came from and how they apply specifically to a Shapeoko, interestingly there are still a range of opinions about this matter, so feel free to contribute to this ongoing search for the golden values !

hmmm… I have found that the words ‘only’ and ‘never’ are tough to apply/believe. I am a happy bystander at this point but I will try to contrbute something useful, if I get the point where I can believe my own observations.