I’m waiting on a new CM board because I’m having disconnects when shutting-off my router (only when they’d be inconvenient, BTW). I found a thread where it was suggested that adding a 1000uf, 50v capacitor to the board would help with this. In that thread, it appeared that Carbide 3D was sending 1200uf 50v caps.

So I wondered about the difference, whether one would work better than the other? So the original thread called for 1000uf, and Carbide 3D was using 1200uf.

I figured I’d add the cap to my current board and have two boards on-hand (a spare is never a terrible idea).

Appreciate any input, thanks.

Can you cite the thread? Without context, it’s hard to say.

Here is the info you need (it’s from Jorge): 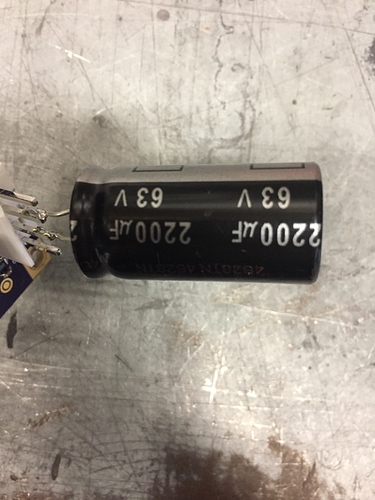 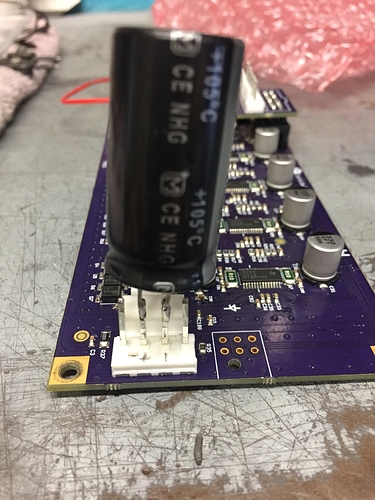 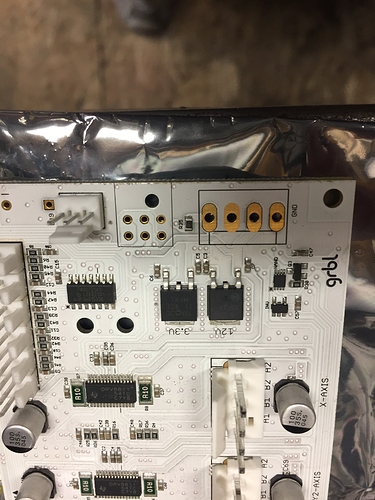 Can you cite the thread? Without context, it’s hard to say.

This is where the discussion started:

A video posted later in that thread is from a user that received a 1200uf 50v capacitor from Carbide 3D to try.

Here is the info you need (it’s from Jorge):

That is yet another value.

I’m wondering if any testing was done and what provides the best result.

Well, I have the perfect set up for disconnects, because I can initiate a disconnect in mere minutes, and have had great luck with the 2000µF Cap that Jorge set me. NO disconnects since.

What is the relationship between capacitance and voltage?

That is, the power supply is 24V. I think I’d want a 35V capacitor at the minimum. As I increase capacitance, do I need to increase voltage rating?

Edit to add: I don’t think I do, but if someone answers me in the next 26 minutes, I can get the right capacitor today maybe.

Well I jumped the gun and ordered a cheapie capacitor assortment on Amazon.

50V max., which I think should be sufficient.

The voltage here is the voltage rating of the cap. As long as it’s 20-30% greater than the design voltage here, you should be in pretty good shape. It’s an electrolytic, you’re eventually need to replace it anyway.

The markets for discrete components like this can be a little weird - a “better” part can sometimes be significantly less expensive just because the volume on them is so high compared to some other value/rating. Example: 3.579 Mhz crystals are super cheap compared to most others in the same size range - they’re used for colorburst on TV’s (used to be, anyway) and made in enormous volume.

If the capacitor eventually needs replacement, ought it not be a part in a plug / socket which can be replaced?

If 1970s component audio (Pioneer, Marantz, etc.) is any indication of how long electrolytics last, it would seem we’re looking at 20-30 years. (At least.)

In this sort of use, where the value isn’t critical to begin with, should be quite a few years, 15-20 wouldn’t be surprising. I doubt I’ll still be using this same machine by then. These get used all over the place, I’ve never seen one socketed.

I added a 2200uf 50v cap at C49 and still get the disconnects when powering-off the router.

New board will be here Monday, hopefully that does the trick. Not going to work on any projects that require changing a bit until I can get this resolved.

It looks like the cap is meant to filter transient voltage spikes from the power when the router is turned on and off. If this is the case, the value of the cap is not especially critical. 1000 uF and 1200 uF are interchangeable. Any value up to 10,000 uF is probably fine. There is little downside to going larger. As others have said, make sure the cap’s rated voltage is at least ~50% higher than the highest voltage you expect to see. Since it is electrolytic, make sure the polarity is correct or the cap will explode. Electrolytics have liquid/gel dielectric which will eventually dry up and change the value, but that will most likely take 20-40 years.

Hey Guys, I had the same problem with the Shapeoko disconnecting when I shut off the router every time. I tried the things I read in this forum and still had no luck. Then I took a shot in the dark and bought a single surge protector that plugs in the wall and plugged the router into it. I tried plugging the machine into it, which made sense to me, but that did not work. I don’t know why it works with the router plugged into it but now the machine stays connected 99% of the time when I turn the router off.

Oh…I just remembered, I do have the new board that came with a cap already attached and this is the same board I was having the disconnect problem with.

Just thought I’d put my two cents in just in case someone wanted another option to try.

Today I received the 2.4d board and it seems to work much better than my 2.2 board. I didn’t have much time for testing as by the time I figured out the fan I had connected was causing problems (the 2.4d board doesn’t use a fan, it has the same three-pin connector for a fan that the 2.2 board had, but it isn’t for a fan), I was out of time and had to move onto something else.

Now I’m going to have to remember to unplug this thing when I’m done. The fan made enough noise I knew the unit was powered-up. W/o the fan, there isn’t much noise at all.

Old thread I know, but…

One thing I’ve noticed is that if I turn the router to it’s lowest setting prior to turning it off, I don’t have any disconnect problems. That makes sense since you’d have less of a voltage spike when turning it on and off. Something to consider.

I’ll have to grab a cap for my machine (still under warranty, but easy enough to get) will probably make it so that I can plug it in instead of soldering directly to the pins.