Any Idea’s what would cause this?

“Sigh”……got this from a co-worker today. This was an item that was auctioned off back in early December. 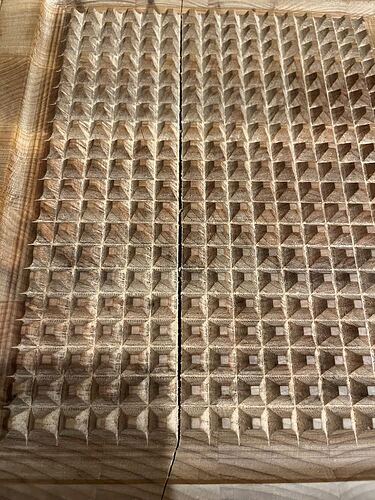 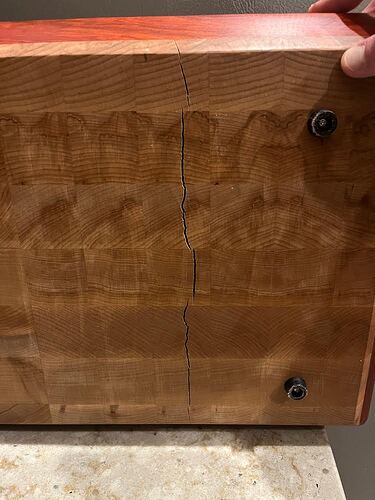 The story goes, the guy bought it, left it in his car for about 2 weeks before taking it inside and started using it. Local here is CO Springs, so it’s constantly hot and cold outside. Yesterday, after 3 weeks of use, he came home and his wife said she found it cracked.

I’m at a loss on how this could of happened…from the pictures, it looks super dried out. To many thoughts trying to figure out why…

Too much pressure during the glue up?
Perpendicular grains on the outside caused the crack from different expansion?
Did the customer put it in the dish washer?

He’s going to bring it to me tomorrow. I’m going to eat the cost on this one. Super confused what would cause this. Dimensions were 28x18x2.5

Original finished pictures are below: 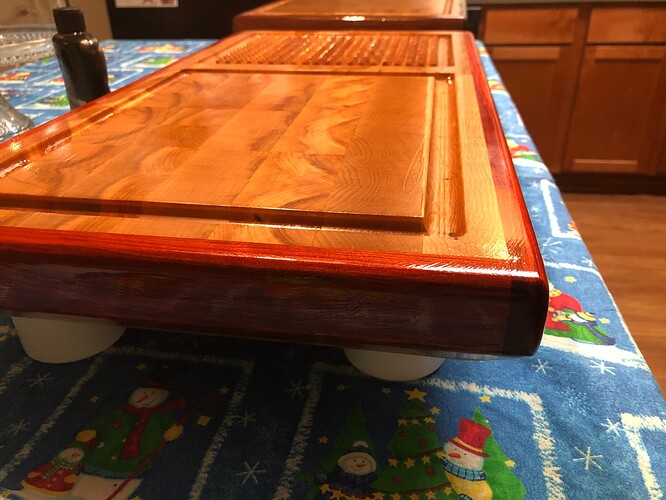 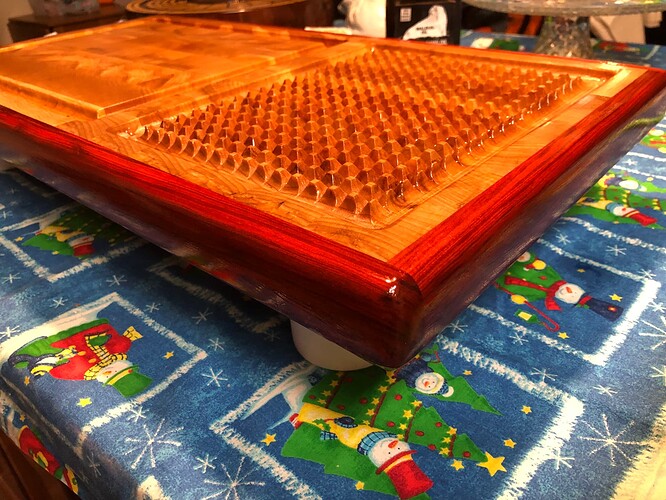 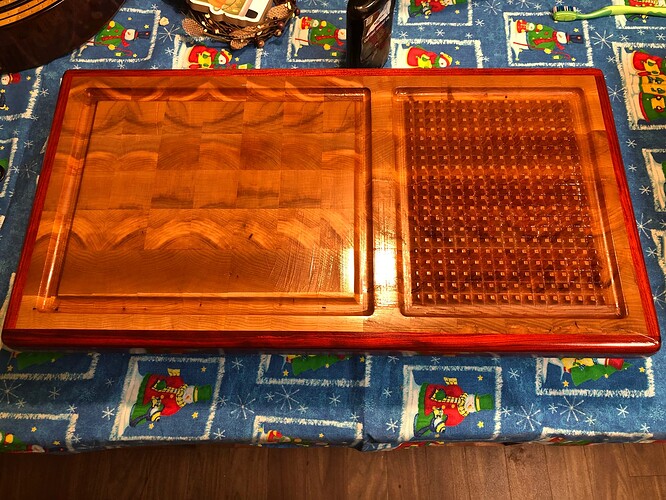 i have made a lot of them and never seen anything like that but my guess would be the dishwasher.

In the picture with the gnarly crack on the bottom, it looks like there’s a blend of end and long grain. That crack certainly doesn’t look like a glue line failure, but from a pressure release from uneven expansion. Could be from grain direction mix, water left on the surface, etc. I’ve seen similar failures from a board left sitting in water overnight on the bottom, or from tons of water left in the top juice groove. Just would want to know more about that grain direction mix.

Sorry for the predicament. Hopefully you can find root cause and learn from it!

As @Wunderaa said the crack is not at the glue line. This is caused by expansion/contraction. So if when made the wood was not dry enough and when in an air conditioned house (air conditioned/heated) the wood tends to dry. When wood is green and/or high moisture content it tends to shrink when it drys. That can cause cracks.

However I would almost bet they put it in a dishwasher. The dishwasher has hot/cold water and then the drying cycle. This can crack a cutting board even one that was perfectly prepared.

In the future you should carve on the back to “Never Put This in the Dishwasher”. The dishwasher is the kiss of death to a cutting board.

Now Colorado gets pretty cold and the heating drys out the air inside a house. If you live there you can attest to the shock at the front door. So if it was the wood was too wet when built the air conditioning/heat in the house could do it. Modern glue is stronger than the wood and this is not split at the glue line but close to it. Indicating the cutting board moisture content changed radically.

Do you have a good moisture meter? When making wood items it is always advisable to check the moisture content before using the wood. Additionally try to avoid cross grain construction if at all possible. Wood at 90 degrees to each expand and contract at different rates that can lead to failure.

Hopefully this was a one of but I would bet on the dishwasher which is unproveable.

Wood moves a lot more across the grain than with it. So, the edges being long-ways moved pretty much not at all, while all the endgrain blocks are across grain, and shrank.

“Breadboard Joint” would be a good Google to see more. It’s an age-old problem for cutting boards, and a reason why doors are made with floating panels.

I haven’t seen an end-grain butcher block with edging before, this is probably why.

From the before and after photos there sure is a huge difference in the finish also.
I’ll say they ran it through the dishwasher.
Regular hot & cold cycling would take a very long time to do that much change.
Unless the photo is just not showing the finish.

Unlike metal which expands/contracts evenly in all directions as temperature changes, wood does not move in a uniform fashion as moisture content changes.

When you study furniture construction you must anticipate and deal with the fact that wood does not get longer/shorter, but will get wider/narrower, and thicker/thinner.

This failure was pretty inevitable unless it was in an environment with no humidity changes.

I’m not convinced this board saw the dishwasher, else it would probably look like a potato chip. I agree completely with the expansion comments in this thread - if you are going to remake it, you should eliminate the perimeter. If you must have a perimeter in contrasting wood, make it with the grain in the same direction as the rest of the board. Like this example: 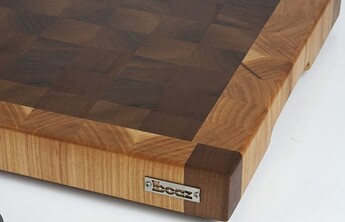 Yep…going to chalk this one up to a rookie mistake. A new Rule in the shop will be that wood ALWAYS expands and contracts seasonally. About 1/8" per foot tangentially ( across flat grain) and the cross piece basically nothing.

The customer has his money back. Some time and money went into learning this one.

I see a lot of novice woodworkers making dinner tables the same way. They decide the end grain needs finishing, and attach a trim piece across the short sides of the table. There’s often cracks or gaps that appear along those edges, unless they’ve made an expandable joint.

expands and contracts seasonally. About 1/8" per foot tangentially ( across flat grain)

Really? Is it really that much?

Dishwasher is my guess as well. I made a small one for a friend, a few weeks later then send my a picture of it in two.

Is it really that much?

In Colorado it is; maybe more for some woods!