Hi, all. I have had my Shapeoko XL for about 14 months now. After some initial newbie mistake at the beginning, I just recently started having some issues with the left Y axis “sticking” as it travels. I replaced the left Y axis belt, but it still is happening. I replaced and lubricated some of the v wheels. While it is better, it is still happening. It seems to be something mechanical, but I just can’t seem to put my finger on the cause. I was wondering if there was anyone in the Northern Virginia area who I might be able to consult with in person? Please?

I’m not in your area, but would like you to try:

Remove BOTH belts, and then jog the Y + and - direction. Now look at at the motors.

If the above is good:

Thank you for the suggestions. I will definitely do these tests – I just want to understand to make sure I am doing what you asked and suggest.

Will - Do you mean slacken both of the Y axis belts, and then verify that both of the y motors are turning in unison?

Rich – Your first item – is that basically the same as what Will was asking? As for your second suggestion, I’m not sure I follow what you are asking me to do. I think you are saying to leave the y-axis belts off, and then remove the x-axis belt as well, and then move them both by hand to see if there is resistance somewhere that is not caused by the belts? Please clarify for me.

Yes, we are both on the same direction, but I am looking for a Root Cause (Sorry it’s NASA thing)

This checks the electronics:
First Remove BOTH Y belts (loosen one side and pull the belt completely off the motor/pulley arrangement). Then boot up the machine and using Carbide Create, Jog Y+ and Y-. You should notice both motors spinning in the same (Proper) direction. Apply some resistance to the motors as they are spinning. Are they behaving the same regarding torque?

This checks the mechanics:
Slide the X-axis back and forth, then the Y…etc…

Next step, after you post some results or are visited by a fellow user from the area.

Where in NOVA are you?

I live in Falls Church (the Fairfax County portion, near The Falls Church Episcopal Church). I’m not sure how to private message on here. If you know how, I can send you my phone number and address…

Thanks for the suggestions. I did take off both of the y axis belts. With the belts off, the y-axis seems to travel very smoothly when moved by hand. When I first looked at the motors running without the belts, it looked like the left one was slipping (i.e, like the set screw may have been loose). However, that may have been an optical illusion. I took the motor off, but when checked it again, it seemed to be turning fine. I did end up moving the pulley out from the motor a little, as it always seems a bit to far in. I put everything back together. However, I now have a loud vibration noise when the y axis moves. I’ve adjusted belt tension multiple times (loosening and tightening), but the vibration is still there. When I try and cut stuff, it is still going off course when when it is travelling on curves. I think it may be the left motor having issues. I do have a spare motor, but I need to take a break for a while to ease my frustration. I’ll post again after I try that.

I do thank you for your time and suggestions.

Next is to determine if it’s the motor or the driver.

And you’re on the right path

Not to be too dense, but what do you mean by “or the driver”?

Ah. Thanks. I hope it isn’t the board. I’ll try the other motor. There is also someone coming by in an hour or two to see if he can help me figure it out.

I assume that your motors have flats on the shaft, so make 1000% sure that the the set screws are ON the flat. 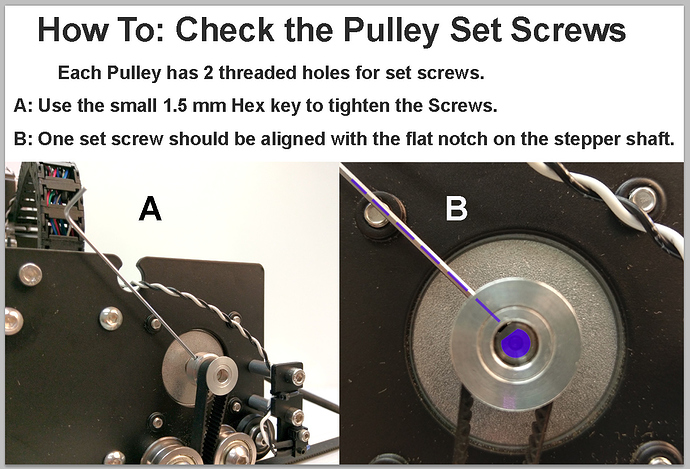 Guess Will had that covered, sorry for the dup

The other day, a local Shapeoko owner came by to try and help (thanks, Paul!). His opinion was that a lot of the baseplate screws may have gotten loose, and the machine wasn’t quite square. Today, I took them all out one by one, and then screwed them in tight and applied LocTite to them.

I then loosened the 16 rail screws for the y-axis and re-tightened them. However, my problem has persisted. I replaced the left y-motor. I put a new pulley on the new motor, and verified a set screw was on the flat. The set screws were tightened,also with LocTite.

I verified the v wheels are tight.

With the power off, the y-axis rolls comfortably with no hangs anywhere.

With the power on, there seems to be a vibration coming from the left hand side.

However, as I jog the y-axis into different positions, the left y-axis does get into spots where I can giggle it about 1/4 to 1/2 inch forward and backward. But in other positions, it remains firm and I can’t giggle it. I’m just not sure what that indicates is an issue. Does that point back to the set screw again? A motor issue?

Once again, I would appreciate any insights you can offer.

I’m now 99% certain that the Y Axis Driver on the GRBL board has failed. Meaning you need a new board.

Thanks for the advice, Rich. I’ll do that.

To 100% verify it is the board, you could open up the box and swap the Y plus in the Y minus motor leads and see if the problem now exist on the other side.

At that point, I was disgusted and ready to throw the machine out into the snow.

I was going to take a video to post so people could see and hear the issue, but I decided as a last ditch effort to put in place a new cable between the left y-axis motor and the GRBL board. (Carbide 3D was nice enough to send that, too.)

And much to my surprise, that fixed the issue! I switched back to the original cable to be sure, and the issue returned. Put the new cable back on, and the problem went away. I will need to open up the wiring harness to reroute it, but it looks like that took care of it.

Thank your, Rich and Will, for your advice. Rich was correct in that it was a controller related problem, but the issue was not that my board was bad, but that the signal was not getting to the motor correctly. Thanks to Paul who came over a few weeks ago to try and help me.