People who have this may have gotten the notice, but Suckit now has a version of their dust boot that makes it easier to remove the shoe for zeroing or bit changing without raising it first. I inquired about buying the shoe separately and they had it added to their catalog in under an hour.

Ingenious dust boot for your X-Carve or Shapeoko 3. Using your CNC is no longer a dirty job! www.suckitdustboot.com

I am considering the purchase the Suckit Dust boot for my machine and was wondering if anyone had an opinion on this new option compared to the non bit changing one. It seems like it may cause a gap where the dust boot doesn’t seal as nicely around the work piece? Is the advantage of easier bit changing outweigh this potential disadvantage?

My instincts say don’t worry about it. You don’t really want a perfect seal you want airflow which is what will move chips. This would help make air current flow from the back to the front where the port is.

I concur with Daniel. My experience with the Suckit is that there is little or nil escape of dust and chips through gaps that often occur when milling a narrow workpiece. Photo below of mockup example may explain what I am trying to say. 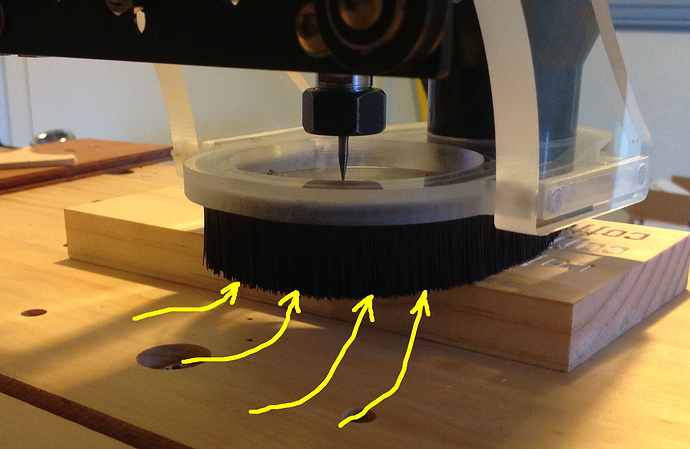 Air is sucked in with little chance of dust escaping although large chips may force their way through.

I have a neighbor that I swap tool use with-he has a laser cutter, and he paid me to buy a Suckit several weeks ago(obviously he has some plans of his own for my SO3XXL), It was ready to ship a couple of days ago, and Jen asked what version/build date I had for the additional bolt kit …and as I had seen the new version on the website in replying with the info, I inquired about an upgrade kit or instructions, was upgraded, and is scheduled for delivery tomorrow!

Ha, they’re hot on my trail.

If you look through my thread here:

My bracket for fixed-height dust shoe

Well I guess this would be shoe V3. It brings two improvements: (1) Increased airflow, doesn't have a choke point. So the hose doesn't recoil as soon as I turn the vac on. (2) Slot at front allows easy removal and replacement with bit in place. The other unit required maneuvering around the bit. Not that you need to remove it very often, but this is just better. Still room for improvement: Different hardware (not available locally) will allow me to maximize Z capacity. I'll replace…

You’ll see I very quickly ended-up with a design that had a bit changing slot. I’d never go back.

You don’t really lose much due to the slot. I don’t use a brush on the bottom of my unit, I just skim the surface. Provide I adjust the height correctly, I get most everything.

I’m sure this newer version of the SuckIt is very nice.

I just got one of the Bit Changing versions today. It looks nice, well built, and was easy to assemble. I can see a lot of thought went into it.

I will be running it thru the ringer next week. I have a HF dust collector, so I do not foresee any escapees.

Now that I have one in my hand it would be easy enough to make a simple bridge(held in place by vacuum) to cover the slot. 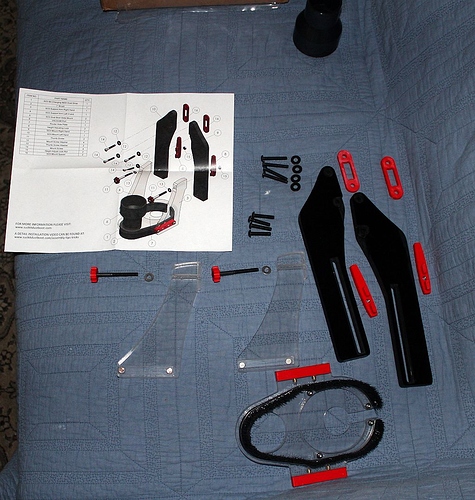 One think I like more about my design is that it cools the bit.

I really appreciate all the great advice and perspectives that people share here! I submitted my purchase for the new bit changing version earlier today after reading the comments here.

Like cgallery above I have the HF dust collector. I am still debating if I should hook the dust boot to that, or use my shopvac which already lives under the Shapeoko. At least I have a couple of weeks to think about it.

Use the dust collector, it will be much quieter and more effective.

I was able to rig up some pvc behind my cabinets so now I have a vacuum port right next to my cnc and love it.

An additional voice saying the suckit dust boot is quite effective. The new version with the slot for mounting when a bit is in the machine is a significant improvement. Also, the end of the rockler universal dust port fits the boot without the include adapter. The picture I’ve included shows my machine working with the dust boot attached. I cleaned the table before I started, but not since. Notice how little sawdust there is. Just reminded me years ago I’d done an illustrator layout for a butterfly decoration. Like a chump I cut it out with a coping saw but I bet with minimal work it would cnc well.