So, I’ve been running a Fusion 360 12 operation, 3 tool job with mixed success lately. First 7 ops run fine. Change tool macro (@neilferreri) new tool first and second touch ok, fails on third touch.
On fail I unlock CNCjs and try tool change again. Works 50% of the time BUT CNCjs forgets where it was and, I guess, starts again at the first operation. Wrong tool of course since I just changed it for op 8.

Not a kindling producer if you’re paying attention but…annoying. What was a 12-13 minute machine time op doubles, at least, while I re-group and re-do.

My first question is, is there a way, in a multi-op setup on CNCjs, to see which op is about to start after a tool change? All I see is the file name in the bottom left corner. 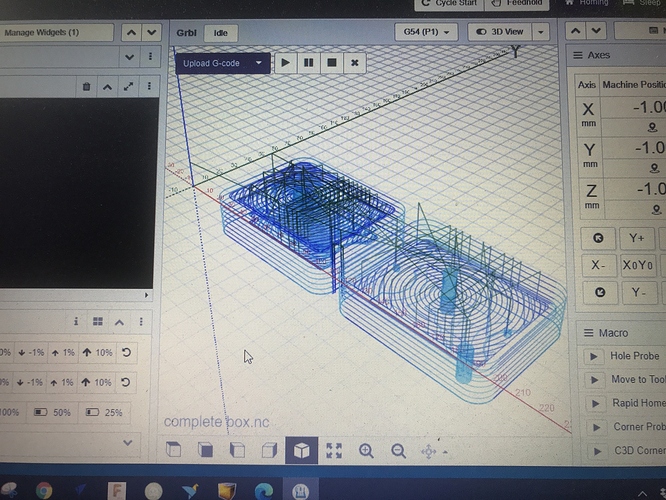 My second question, directed at @neilferreri is, knowing it’s slightly less accurate, is there a “two touch” version of your macro for non-Carbide3D controllers? If so, I’d love to try it! The cutters I have the most trouble with are single flute, 1/4”.

Oh, and yes, I’ve done what can be done to ensure the prox limit switch inside the Bitsetter is in optimum working circumstances.

is there a “two touch” version of your macro for non-Carbide3D controllers?

The tool change macro? Not now, but easy to change. I’ll take a look later.

BitSetter fails to trigger or the probe times (distances) out?

What Neil said. I’d look at the probe distance first, especially if switching to smaller diameter cutters which are generally much shorter.

I use Neils routine on jobs with half a dozen + tools changes. Switching to and fro as I work through sheets of fat plastic. Never had an issue. I will say that I’ve had some issues with my CNCjs being quite inconsistent, I guess you’d call it less than stable. I don’t know, it might be a new less than stable version. Might be my monitor. Might be my Rpi. I am not a software guy. I get different dialog boxes during tool change routines, Rpi GUI lock ups, various things. But it worked today quite nicely.

@neilferreri Thank you for your contributions. I’ve learned a lot from your notations, more so than from any other source.

BitSetter fails to trigger or the probe times (distances) out?

Neil, you know me, I’m a woodworker…I’d guess the probe times out…the led blinks on the third probe then fails.

So you’re not smashing the probe button?
You might just need to increase the probe distance (in the initial tool macro).

I prefer to still break up my jobs and run the files separately. I’ve been in the same position, not with probing issues but with something going wrong and then having to redo a file that skips the first several operations.
The toolchange macros will still work if you run the jobs separate. Just remember to run the initial macro again if you restart CNCjs.

EDIT: @Griff Are you seeing it fail after it’s completed a probe or two on the SAME probing sequence?

So you’re not smashing the probe button?

If I was to modify the macro which line(s) following the comment “dial-it-in-probes” would I delete?

Really sounds like something is going on with the BitSetter.

On the third touch in the sequence the led stutter-blinks, like the ground is intermittent on that light of a touch. I’m guessing the tiny surface area of the tip of a single flute is the reason. I only have this issue with single flutes. I do all I can to ensure good contact prior to probe, clean end mill tip and Bitsetter button.

I’ll mod the macro per your instructions and report back.

The problem I see is that if the BitSetter isn’t catching that last sequence, you’re at least 2mm off from the previous one.
The other possibilty is that your HDZ (you still rocking the homemade one?) is having trouble moving at the super slow feeds? F10 or F5