My original Carbide Compact Router just stopped in the middle of a project. (end mill cut in soft wood). The Carbide Team customer service was great and replaced the router ASAP. Now the second router died after two small projects. It ran for about 15 min and then just stopped. I replaced both brushes and nothing! Anyone else have problems with the Carbide Brand Compact Router?

We haven’t had many other reports of bad routers, and yours is the only instance of a replacement also being bad.

Each of the routers should have shipped with carbon brushes — have you tried replacing those?

We will do our best to work this out with you as quickly as we can — do you have your machine in an enclosure?

My suggestion for an immediate fix if it’s not the carbon brushes would be to grab a Makita RT0701 from your local hardware/woodworking store — if you do that, let us know and we’ll do our best to make this up to you.

Stick with Makita…I’m 3+ years on the same router…and same OEM brushes…Also put a sock over the air intake…might be ugly, but it helps the life of the router… 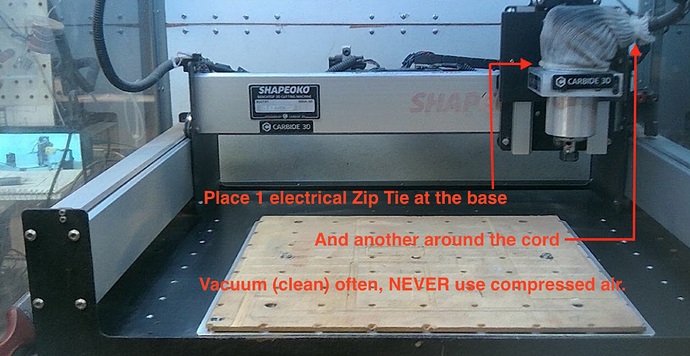 Thanks I have tried replacing the brushes multiple times. I will certainly try adding a sock over it, but I don’t think that’s the issue as I have good dust collection.

+1 on the Makita, it is very solid, the brushes last a lot longer than the Dewalt and probably the Carbide Router, it has lower speed capability (10K vs 12K) which is good for many cuts.

We may have found the issue. I’m in Florida and my Shapeoko/router is in an enclosure in my garage, so it may be heat and lack of ventilation. I’m adding a fans to the enclosure to help reduce the heat.
I also want to say a big THANK YOU to the Carbide support team. They were quick to respond to emails and called me directly to discuss my specific problem.

Agreed with Makita. I’ve been a fan since AvE did some tear downs of their stuff. They aren’t a mega conglomerate like the other guys either.

Mine just quit. I changed the brushes already once. I have an air conditioned shop so heat is not an issue. I have only used the shapeoko cutter one time for about 40 min. Let’s see what happens now. Wish the makita was available when I ordered. Wish me luck

Please contact us at support@carbide3dcom — let us know what you’ve done, and send in a photo of how you have your machine set up.

Those Makitas are often less than $100 in big box and tool stores. I was so impressed with mine that I purchased a second that I use as a router in my shop and get the big Milwaukee out for big jobs and it is mounted to my large router table. Those branded spindles are a stock item and do not need to be ordered with the CNC to work with it. Carbide is not selling Makitas and probably won’t as they have their own clone.

My DeWalt router died also. Not even a year old! I just bought a Makita.