I had so much hope for the new duplicate feature, but it appears not to handle imported picture models.

Take a vector, e.g. a circle. Import a grayscale picture into it. Use Select all to ‘select all’.
Edit → Duplicate selected produces a duplicate of the vector shape(s) but not the grayscale picture. 3D Rough and 3D Finish toolpaths are not duplicated.

Please fix. The Models interface is user-unfriendly to begin with and having to duplicate all of the imported picture values, then set the 3d rough and 3d finish toothpaths for every copy is very painful.

Original on left. Duplicate on right.

The copy feature is only of vectors.

There is no mechanism for copying/duplicating 3D models or toolpaths in current versions.

“There is no mechanism for copying/duplicating 3D models or toolpaths in current versions.”

If I take my Duplicated vector shape and newly import the same picture Model into the copied vector then CC Build 622 automatically duplicates the 3D Rough and 3D Finish toolpathing.

Use Select All to select picture image model. Use Duplicate Selected to create copies.

Selecting each copy individually, use Model ->Import Image to import the same picture as the original. Set Import Image values the same: Angle, Height, Scale, Base Height etc., then Done.

Result: Existing 3D Rough and 3D Finish Toolpaths are automatically appended with additional toolpathing for the imported pictures in the Duplicated vector shapes.

I have not experimented to see the effect of importing a different image, or the same image with different import Image parms (vs the original). I wanted simple clones of the original. 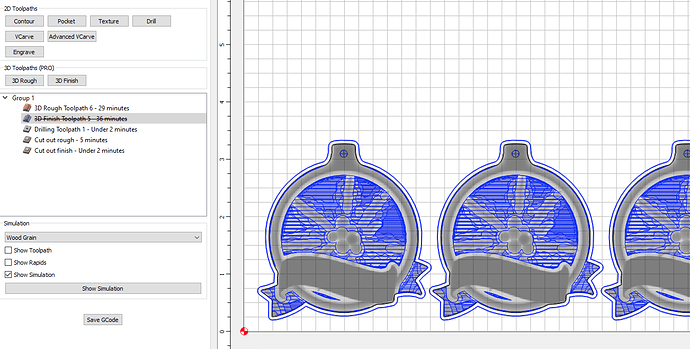 For fun I ran the gcode on my machine and it works the way you would expect…each 3D toolpath performs its operations on the first object, then moves to the second Duplicate object, then the 3rd, then the fourth.

Correct, toolpaths are copied as part of duplicating geometry — that’s a new feature and still getting used to it.