I had a few sample pieces of ceramic coaster which I had wanted to attempt to machine in some way. The most notable characteristic of the stock material was that the coasters had a matt finish and when carving with a DDE bit (and liquid soap to aid friction reduction) they appeared to be made from quite a soft material. One could not mark the coasters with a fingernail scratch but they took pencil marks very well and it was difficult, if not impossible, to remove pencil marks completely by using very vigorous scrubbing techniques with a nylon scouring pad.

I wanted to use the DDE 90° bit and it did engrave the ceramic material quite easily but the finish was not what I would call satisfactory. I had set the depth for a single pass at 0.2mm but the pattern, although clear, was not deep enough. I suspect that I should be making multiple passes to achieve the well defined edges I want to see. The two examples shown are just ok but they could use more work. Speed was 500mm per minute and I would not be temped to push the RDZ DDE bit any faster. Its spring is not as strong as the MC Etcher spring and the tube holding the bit is longer. 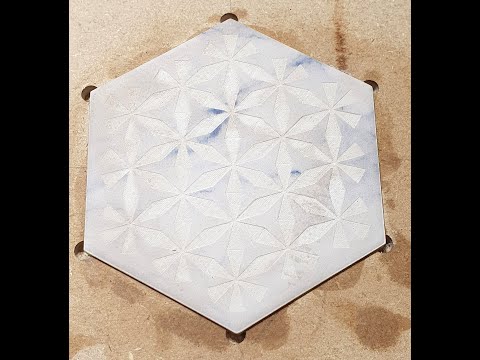 The repeated pattern decreasing in size was the first attempt. I had used a viscous cutting and tapping oil that was brown in colour and it proved impossible to remove. This accounts for the stained appearance of the engraved areas. The red highlight indicates a coarse lined area that I saw on my previous attempt to engrave slate. The same bottom right corner too so that is something I need to analyse and chase down. 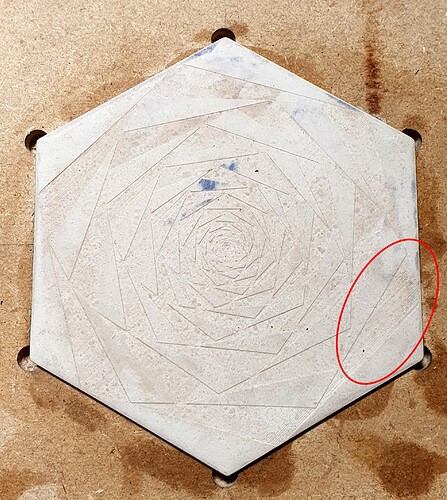 The flower pattern was the second attempt and it looks cleaner because I used liquid soap as the lubricant rather than a deep brown oil. The bottom right highlighted area shows the coarseness of the bit. (Is this just the engraving toolpath in CC. I guess the next experiment is to use just a pocket toolpath for the engraving and see whether that will make a difference. The small highlighted areas show the construction of each leaf and I was surprised to see that the engraver had made that line deeper. In any event, another test piece rather than a piece to give to friends. 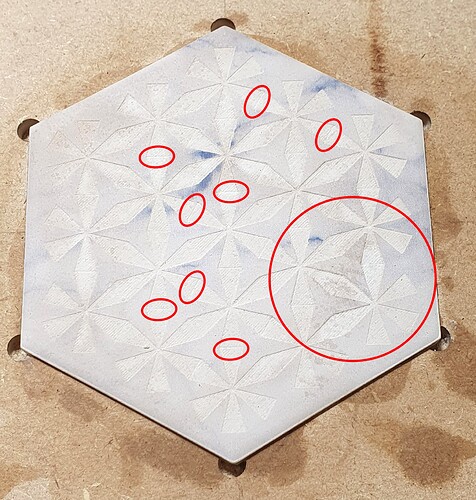 My lack of success with the DDE bit on this new to me stock material made me consider other approaches. I thought the material was possibly soft enough to machine. The jig I had made was an exact fit and would have held the workpieces firmly with 5mm of the workpiece below the jig surface. In the end I decided to try and engrave this matt ceramic workpiece with the JTech 4.2Watt laser and Lightburn. I used a power setting of 100% and a traversal speed of 250mm per minute. 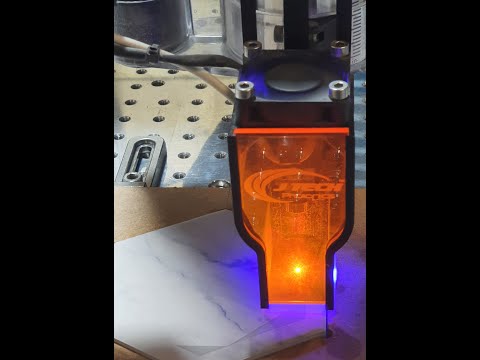 Pix:
The first image is of the plain coaster in the MDF jig. 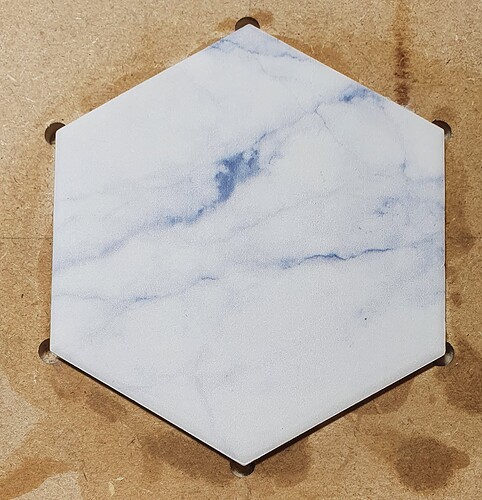 The second image is an outline of the leaf pattern I had previously tried to etch with the DDE bit. It looks sharp and clear with some sign that it was not quite central in the software when viewing the top and the the top left. 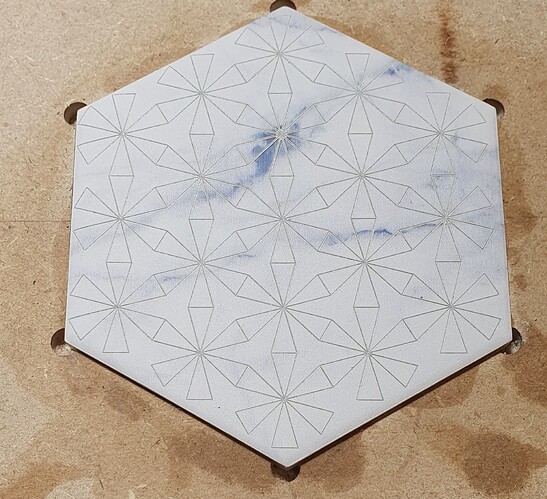 The third image is the coaster with the repeating but decreasing pattern after engraving. 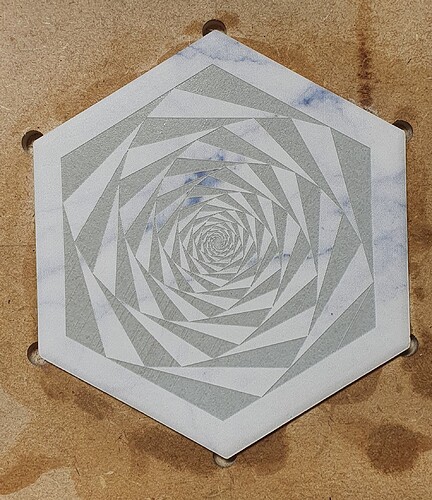 The final image shows the laser at 100% power. 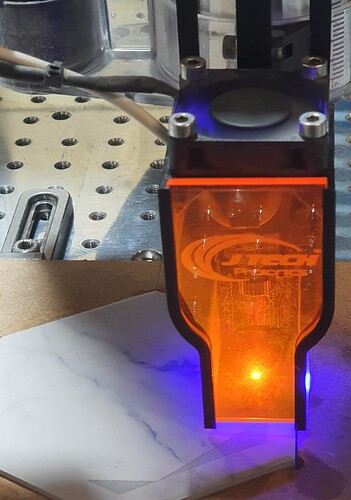 Mental note to myself: use laser on ceramic tiles, it works.

Yup, it surely does work, @Julien Julien. I guess the discolouration of the cut area seen on the tiles which were successfully engraved is the effect of the heat of the laser. It also shows that there is no need for special coatings providing the tiles have a matt finish.

The company (Sweeze) who manufactured these items appears to have lots of them in the range. 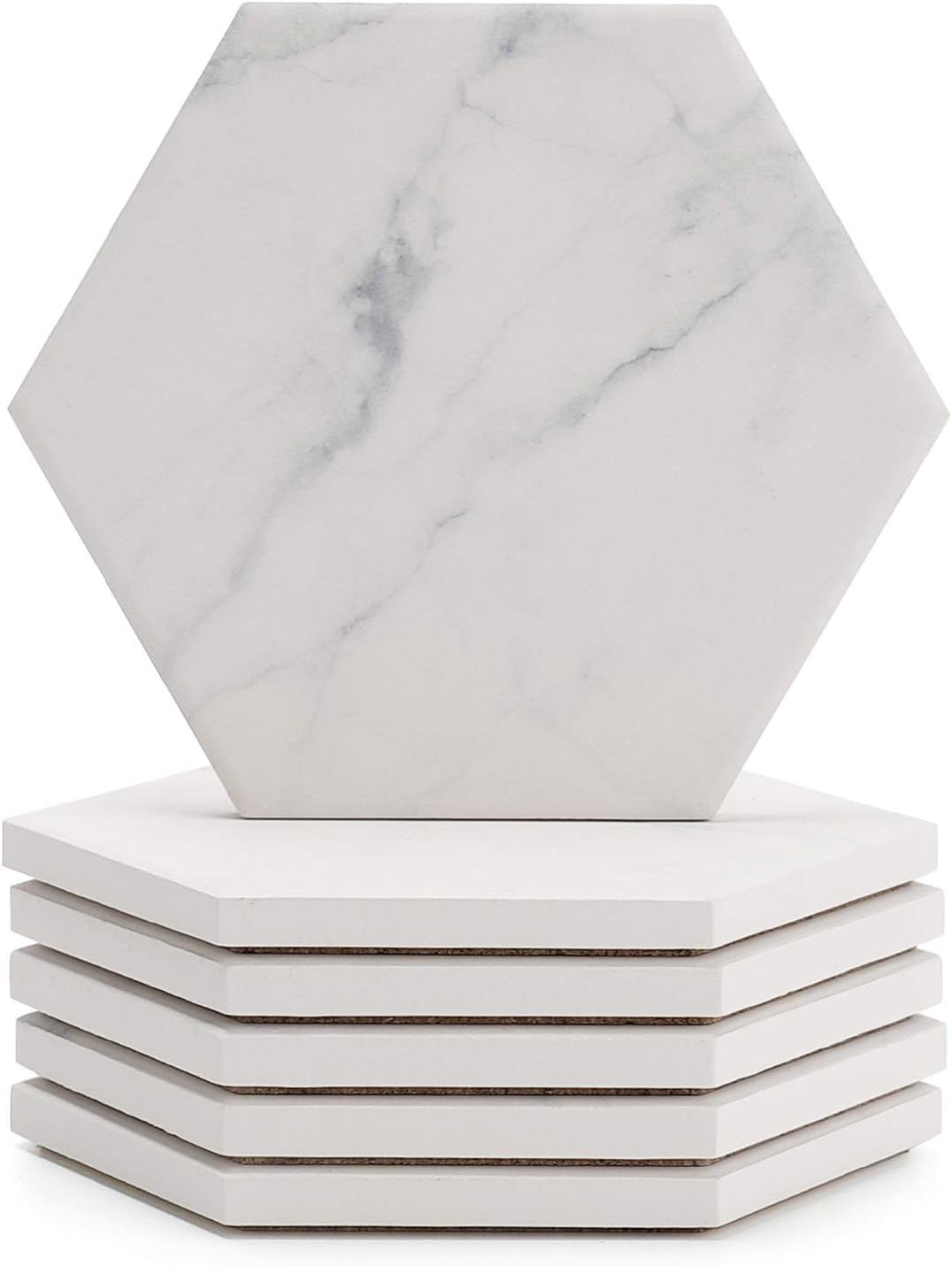 I’ve been looking into the Norton White Tile Method looks like a neat way to laser some great detail on tile - going to give that a try soon. Although I had issues with laser engraving a larger (~8x11”) test photograph because the machine would stop about 30-40min in; it wasn’t an EMI issue since there wasn’t a disconnect. I never got quite to the bottom of that.

@jepho I ended up jumping on the MC Etcher combo pack since it has been re-stocked. Looking forward to messing around with those as well. I’m riding on your coattails, picking up nuggets of information from the results you’ve been sharing.

I’ve been looking into the Norton White Tile Method looks like a neat way to laser some great detail on tile - going to give that a try soon.

Yes, interesting technique there, Brian. I will probably try it. I use a JTech laser with a high resolution lens so the focus steps would not be necessary for me. Regardless of the object being engraved, the focus point of my laser is always 3.175mm (1/8") from the workpiece.

I just touch off the workpiece once to trap the piece of paper with the shroud of the JTech and then add the 3.17mm to the Z axis height in Lightburn. In the case of the jig I have just used, where I have the same tiles, I record the X and Y and the Z position at the start and those numbers remain the same.

I ended up jumping on the MC Etcher combo pack since it has been re-stocked. Looking forward to messing around with those as well.

I have had some good results with slate and glass with DDE work. I think unless the tiles are much harder or have a glazed surface, the DDE approach is unlikely to work as well as the laser. I noted that the 15W Ortur is similar in output to my 4.2W laser.

Although I had issues with laser engraving a larger (~8x11”) test photograph because the machine would stop about 30-40min in;

Hmmm… It may be a thing that can be resolved. I wondered about the time that work took and whether you had sufficient cooling of the laser head. What laser hardware and software are you using and what OS is your computer running?

I’m going to try and mess around with slate and glass to start off with.

As far as lasers, I’m running a 2.4w Jtech via LightBurn on a Windows 10 Pro machine. I posted about it in the LB forum and one of the residents mentioned something about the baudrate of the GRBL controllers not being high enough.

I posted about it in the LB forum and one of the residents mentioned something about the baudrate of the GRBL controllers not being high enough.

As far as I can tell, the baud rate has to be set at 115,200 for Lightburn. The person to ask would be Oz over on the Lightburn forum. He wrote the software and has a great way of explaining stuff.

Your JTech will likely need to double up on the timings I used. The 100% at 250mm per minute will need to double the time asa good place to start. That will get you just a bit more exposure to the laser beam than I had used.

I’m going to try and mess around with slate and glass to start off with.

The rough surface of slate looks great when tamed by the DDE bit but the undulations on some samples of slate may require a bit of depth in the setup and reliance on the sprung tip to keep the bit in contact with the slate.

Glass is nice because the flat surface is easy to use and it is not a chore to control how level it is. I broke my first diamond by not knowing that a friction reduction product would be necessary (and helpful). Liquid washing up soap is fine. Pour it neat onto the glass and start engraving. Keep the bit of the edge of the glass and it will not chip the diamond or free it from the mount (as was my case) while it is being used.

Beware that the glass is thick enough. Too thin and the DDE bit will be just like a glass cutter and you may end up dealing with shards of your workpiece all over your machinery. I like 4mm thick glass because it is easy to frame it. Thicker glass (10mm or more) can be chamfered and polished at the ordering stage.

I’ve been looking into the Norton White Tile Method looks like a neat way to laser some great detail on tile - going to give that a try soon.

Yes, Brian. I too have read about this method to update my own knowledge. I have just purchased a square metre of white gloss ceramic tiles (6 x 6 inch tiles amounting to 44 tiles in number) at a price of around $8.22. At a cost of approximately ¢19 per tile, I can certainly afford to experiment with this method of laser engraving images onto tiles.

I am awaiting delivery of the necessary acetone and flat white spray paint. I am selecting suitable images right now and processing them for applying to the tiles. While I was waiting I also machined some MDF to make a jig for work-holding and for finding the centre of the 5mm thick tiles, easily.

Pix:
Jig machined to a depth of 3mm with relief holes bored at each corner. 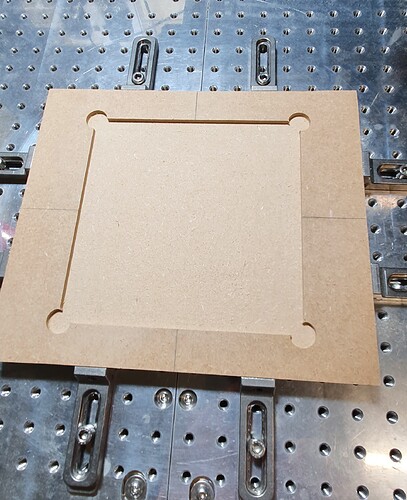 Tile in situ in the jig. This is a snug fit after first checking that all of the tiles were dimensionally accurate. 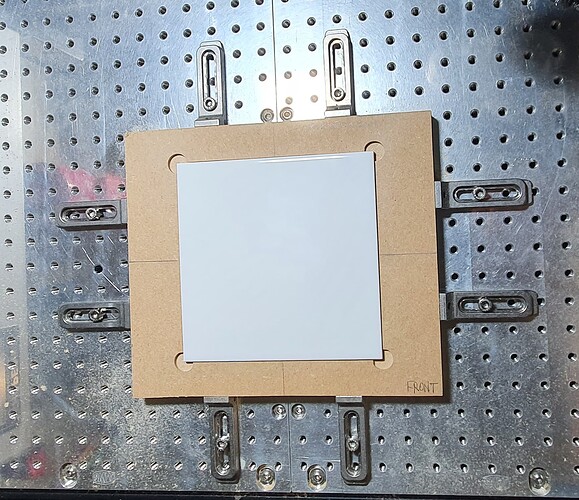 I will be happy to post my results and settings once I have a few tiles to show.