@robgrz Thought: Would you consider adding a button in the Boolean Preview panel to “Change the key Vector”? This would let you change the key vector to the other one selected when the Boolean dialog opened and let you see the results immediately - making it much easier to find the combination you’re looking for.

NOTE: The circle is the key object when I first open the dialog by clicking Boolean Subtraction: 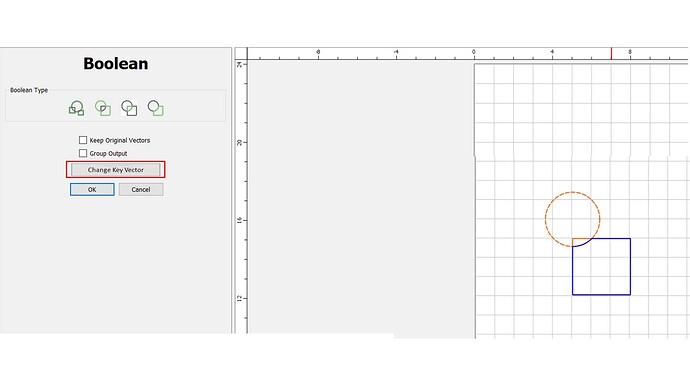 Then I click the “Change Key Vector” button (still in Boolean Subtraction) and the square becomes the key vector and the result is previewed: 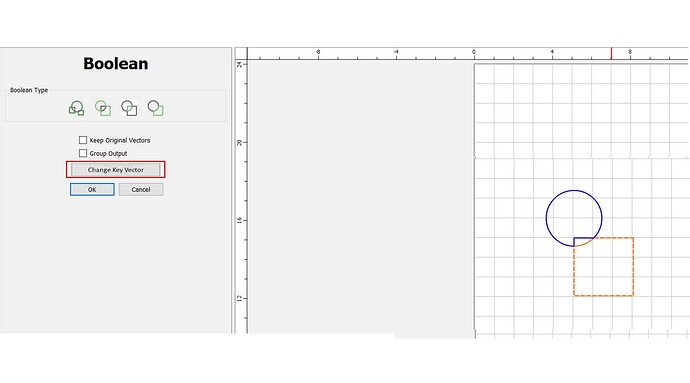 I think this would make the Boolean preview even more powerful and useful.

This feature has become important since the introduction of the Boolean Preview panel - because we used to just UNDO and the key vector would swap - but now, we’re canceling before we try anything…and to change the key vector we’d have to cancel out of the dialog, deselect and then reselect, and reenter the dialog … far less user friendly.

I had assumed that we’d change the subtract option at some point into two modes, A-B and B-A, which would get the same effect. (It would also allow us to get rid of the select order flipping on undo, which was initially a bug and then people started using it on purpose so we had to keep it)

Off the top of my head, union should not be affected by the order of the two items, nor should intersect, so it’s only subtraction.

Good point. Hadn’t thought of it. So, OK, B-A; A-B might work, but maybe having the button only when subtraction is selected might make more sense logically…only one function and you’re swapping the key object. 6 of one; half dozen of another.