Changes in v-carving not sure why?

Yesterday I was trying out some engraving in acrylic and to my surprise it came out well on the first try. Today I am trying to do the same thing only now it is melting the acrylic when I do. I tried lowering the rpm to as low as it will go but am still getting the melting in the engraving. I’m not sure how this is even possible as I didn’t change any settings from the first time when it came out clean.
Here is a pic of how it came out yesterday: 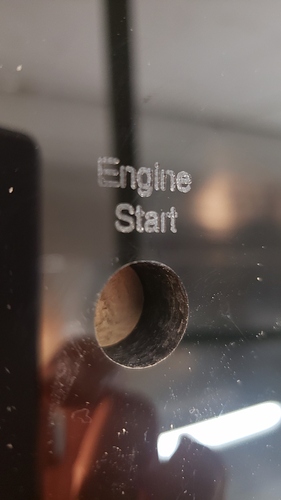 Here is a pic of how it came out today: 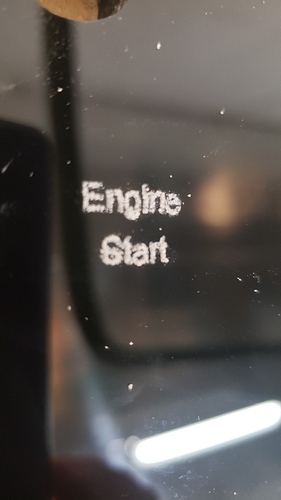 How could I have gotten these different results without having changed the gcode? Am I missing something or perhaps I changed something without realizing it?

thanks for your help

That second pic looks like what happens when my v-bit goes deeper than I want.

The second one is in a different location (different x- and y-coordinates), correct?

Either way, it looks like something is overloading the heat-dissipating ability of the v-bit, too deep a cut or possibly too slow a feed rate (the acrylic I cut tends to like high feed rate with slower cutter rpms), if everything is level at the surface. You can start with a higher z-zero and progressively lower it on subsequent passes to see what depth looks the best…

And it looks like there is some distortion to the uniformity of the text in the second pic as well (the “g” and “a” appear to be lower than the adjacent letters).

Your acrylic looks thick enough to not be bending so that is very interesting. Deflection maybe? V-wheel aberration at that spot?

Feed faster (like, x2) and that should help with the melting (no clue why it would behave differently btw runs though)

I did notice that there is variation in the depth. I’ve tried setting the z right at the location where I’m cutting and still no change. It almost seems to be progressively getting worse.
I’m curious if everytime I probe for z the tip of my bit is getting deformed.

Does this look like enough to be causing the rough cutting? it’s a 60 degree v bit, should I be using something better suited? 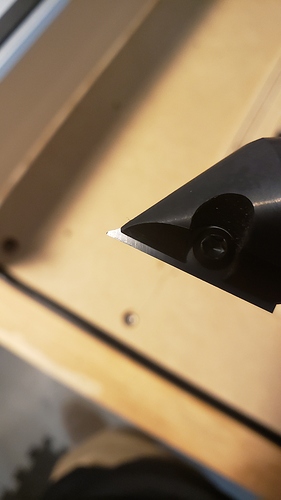 That tip may be making an issue, does it get any better if you step down incrementally between passes (starting just a hair above the workpiece)?

The inserts may be a weak point in yours, I don’t know, at least they are replaceable. I use these: Yonico 14103q, they are solid carbide.

I switched over to a newer 90 degree and appears to be a lot better now. Thanks for the link for those bits.