How am I going to get any work done today, if I keep watching that video in a loop ?!

Great fun, and very nicely made

@ScottsdaleSteve - Wonderful job with a great mesmerizing effect!!
What bearings did you use for the gears? I was wondering what I was going to do with the Z belt from the maintenance kit, thank for the solution!

What bearings did you use for the gears?

Mind blown. I wanted to participate in this contest… aaaannd upon seeing your submission this morning am honestly so relieved I didn’t

Just wow. It’s gorgeous and so impressive you go that done during the contest period!

What is your setup for pictures/video? They are super professional looking with the black backdrop. I’m always taking pictures on my granite kitchen island, but we have overhead recessed lights so I’m constantly fighting spot glare in the surface. Your setup really adds an extra cherry on top for showing off the final result!

Thank you for your kind words. I wish I took a picture of my photo-shoot setup. It’s basically just a dark blue blanket (black would be even better) that starts under the project and curves up behind it vertically, rising higher than the camera’s view. Shot in a relatively dark room with a single painter’s light (75 Watt Bulb) lighting the project. You don’t want a bunch of ambient light shining on the backdrop, thus drawing attention to it. Nikon DSLR camera on a tripod, f/13 for good depth of field, 1/2 second shutter speed. (The slow shutter speed makes the tripod critical). Same camera on a tripod for the videos.

Video produced in iMovie (comes standard on a Mac). I can’t say enough good things about iMovie - Apple really knocked it out of the park. Almost no learning curve and built-in professional trailers and transitions. I did the whole video in an afternoon.

Now why can’t kids have something educational like these instead of that pengiun slide thing that plays the awful tune?

awesome job!! this must have been one long project…

How can I challenge those artists in future! I can’t!

Paint each gear a different color. It looks like it will all run from one motor, if it will, easy enough, there should be plenty of room for a small low rpm pancake motor… Would be really nifty, slow turning 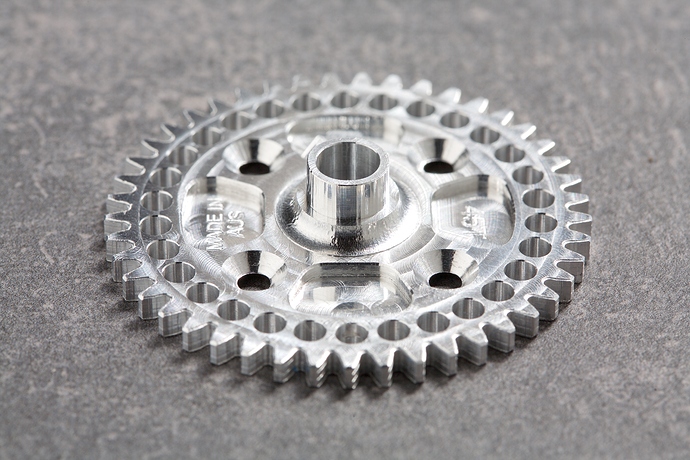 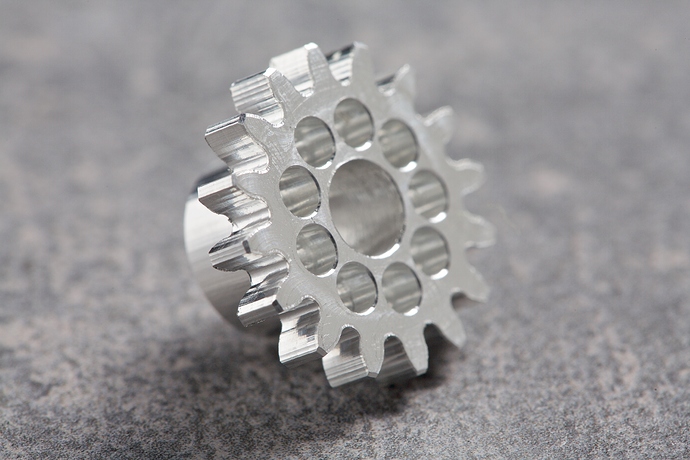 A few days after seeing this challenge I decided to see if it was possible to machine an RC car aluminium spur and pinion gear. I’m studying mechanical engineering at university and have some experience with gear design. I will go into more detail below about the gear design, but everything was designed from scratch in Fusion 360 without the use of a gear generator.

The most challenging aspect of this project was the tolerances required for the gears. For the spur gear the bore for the drive shaft and bearing had to be a perfect fit so that the whole differential assembly would spin smoothly at high RPM. Another challenging aspect was the endmill required to mill the tooth profile, as the spur gear used a MOD 1 gear profile I needed to use a 1mm endmill to mill the profile.

For the design of these gears I started with some simple gear calculations to work out basic parameters such as, pitch diameter, base diameter, addendum, dedendum, modulus and the pressure angle. From here I moved to Fusion 360 and put these equations into the parameters box so that the sketch was parametric.

The gears had a modulus of 1 and used an involute tooth profile. To get the correct profile for the involute tooth profile I used a spreadsheet (This was sourced online) that generated a number of points along the spline curve. These points were then imported into Fusion 360 using the ImportSplineCSV function. Then from here I had the correct profile of the gear and could model all the other essential features required for both gears.

Image of the parameters used for the sketch. 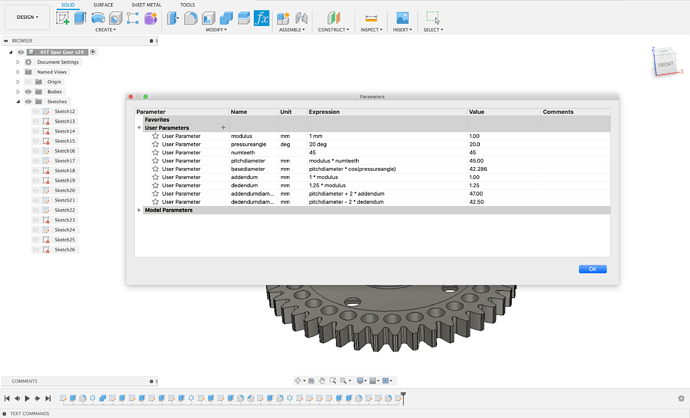 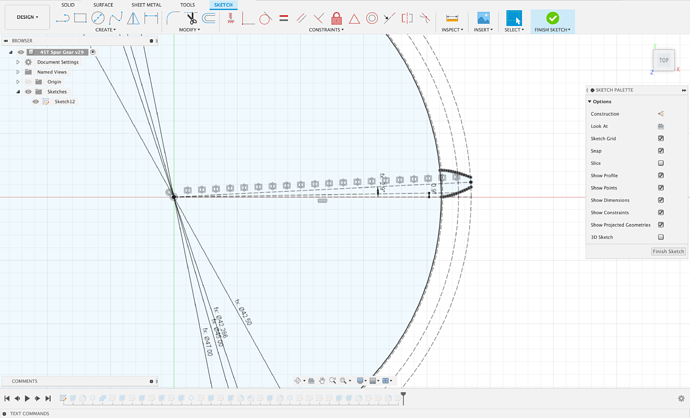 I spent a lot of time dialling in the CAM for this project and machined a number of different prototypes using different CAM strategies. For the final part I was able to get the tolerances perfect with zero play in the bearing and drive shaft fitment. The spur gear has lots of different features such as a filleted o-ring groove, 3mm holes around the outside to reduce the rotating mass and other pockets to further reduce the mass of the gear.

An image showing some of the tool paths for the first operation of the spur gear. 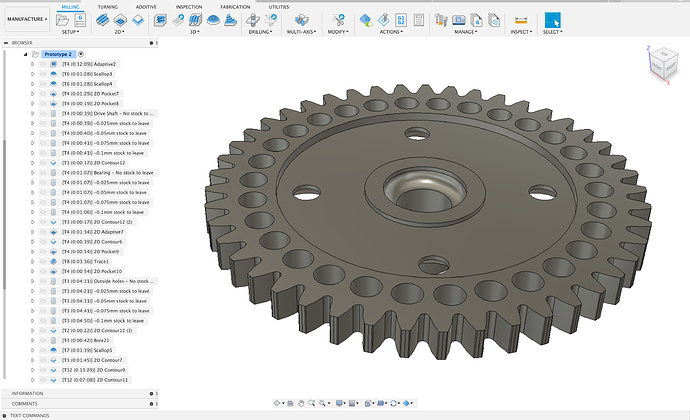 Overall I’m really happy with how this project turned out and it was one of the most challenging aluminium projects I have undertaken. Below are some images of the finished parts.

There were a number of different prototypes machined before reaching the final iteration. 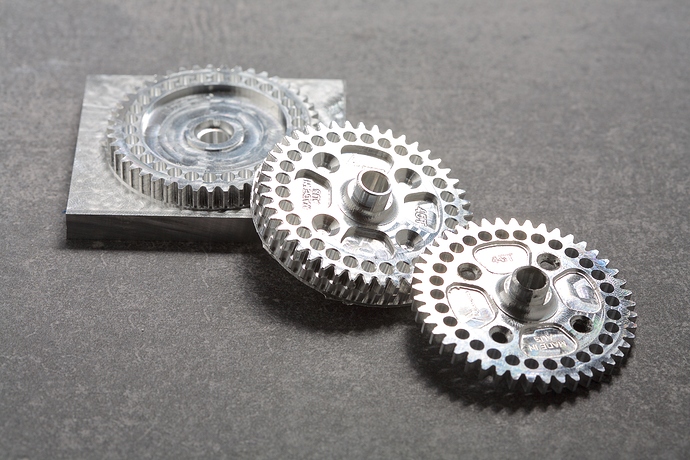 Images showing some of the features of both the pinion and spur gear. 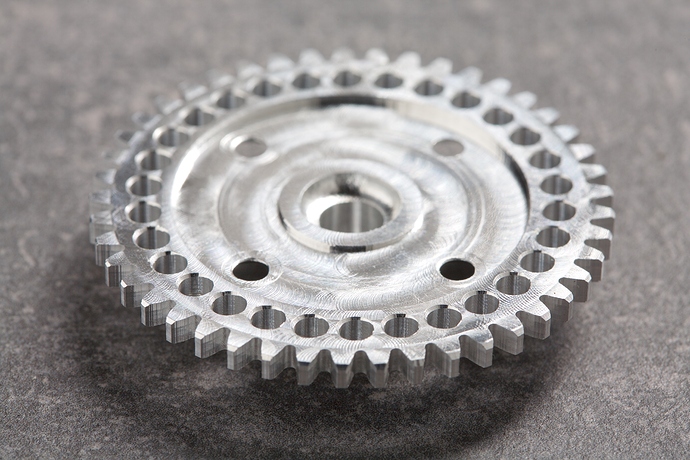 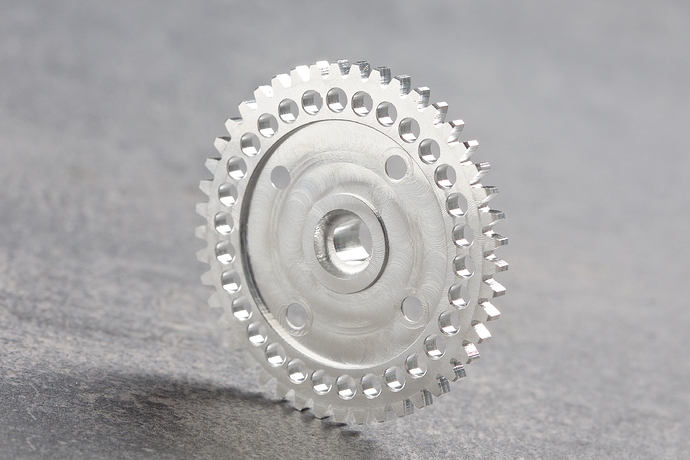 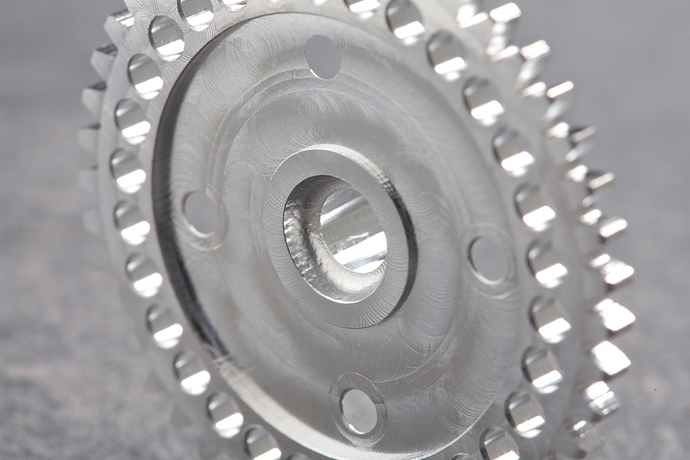 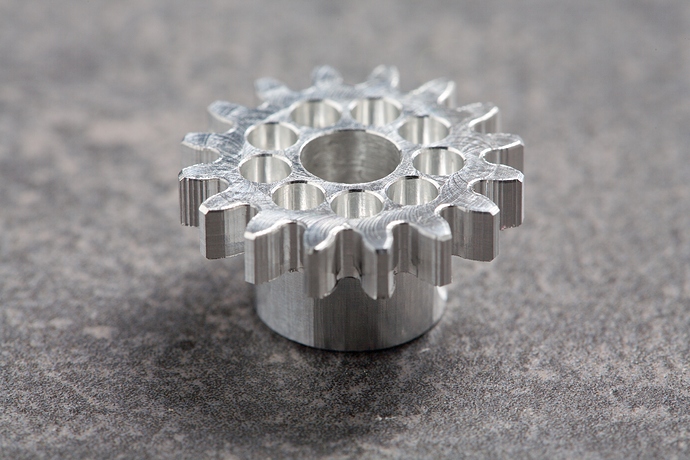 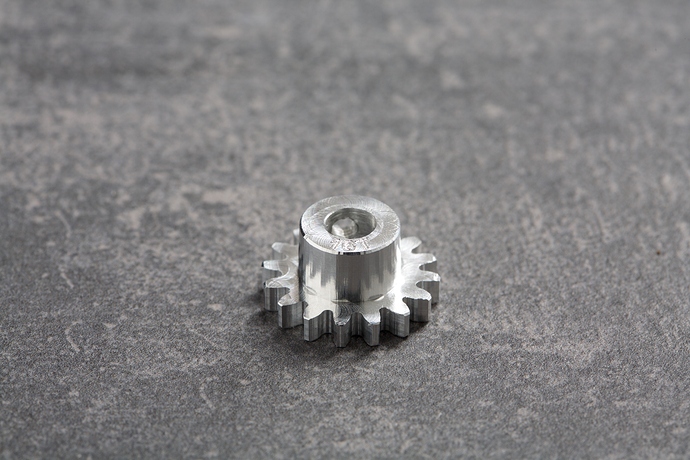 The following images show how the differential is assembled and how the spur and pinion gear fit into the assembly. 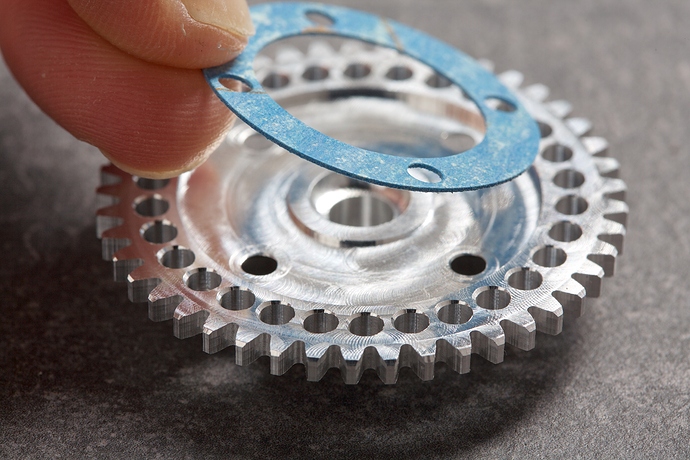 The blue gasket and red o-ring help to contain the oil inside the differential. 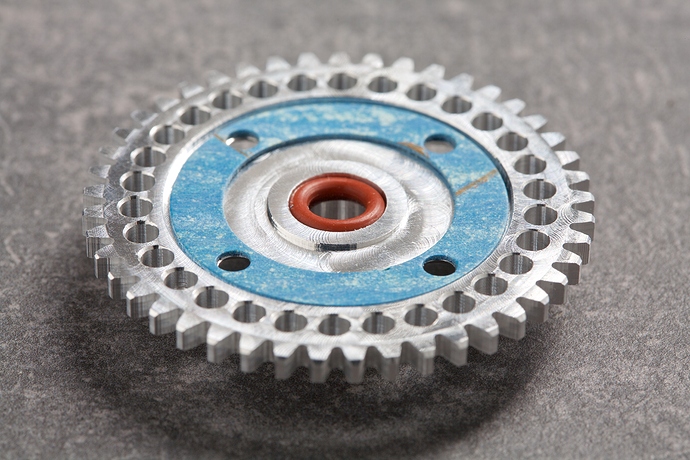 The following images show the complete centre differential with the spur gear attached. 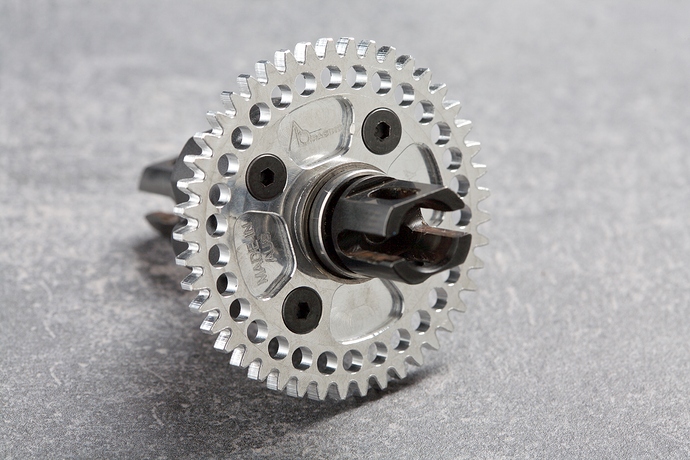 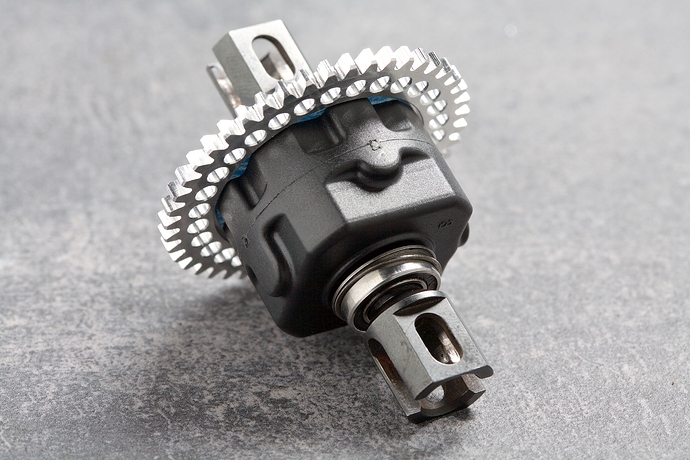 This image shows the scale of the two gears. (Pictured next to an iPhone XS). 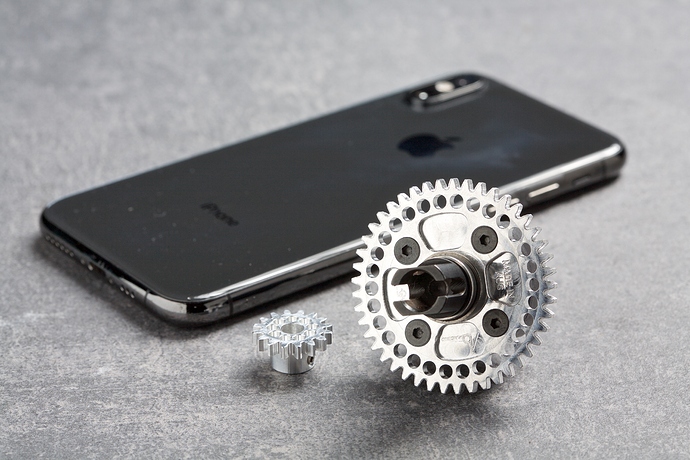 An image of the pinion gear attached to the motor and the differential mounted. 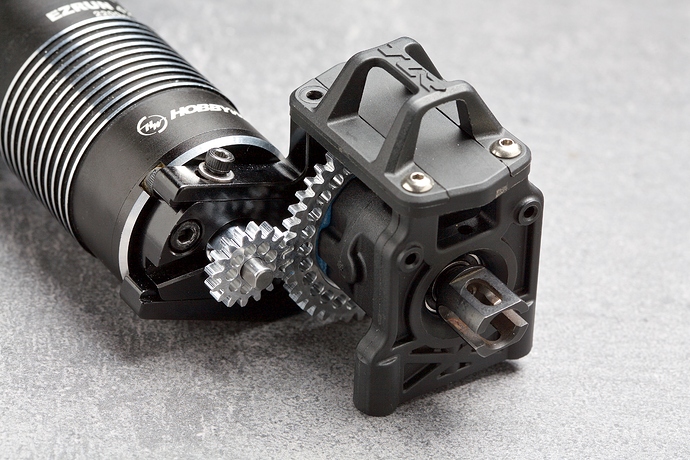 Finally an image of the 1/8 RC buggy that these two gears were designed for. 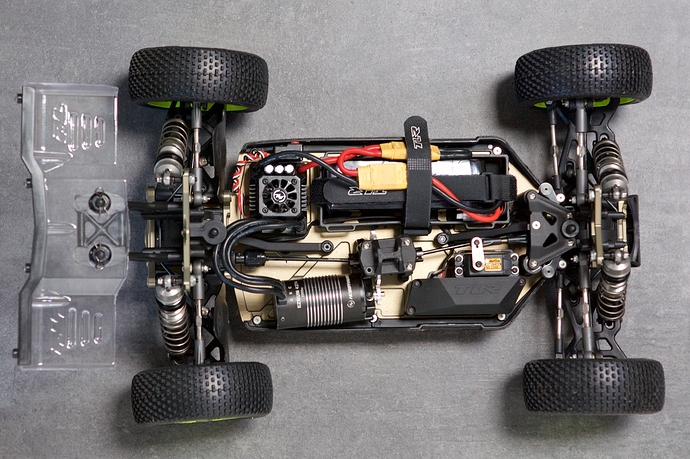 Thanks for reading, this was an awesome challenge.

Here is my entry to the Gear Challenge, I created a Drawing Machine with custom gears made on SolidWorks. It is also driven with a stepper motor and Arduino which I’m new too (why I’m entering so late) 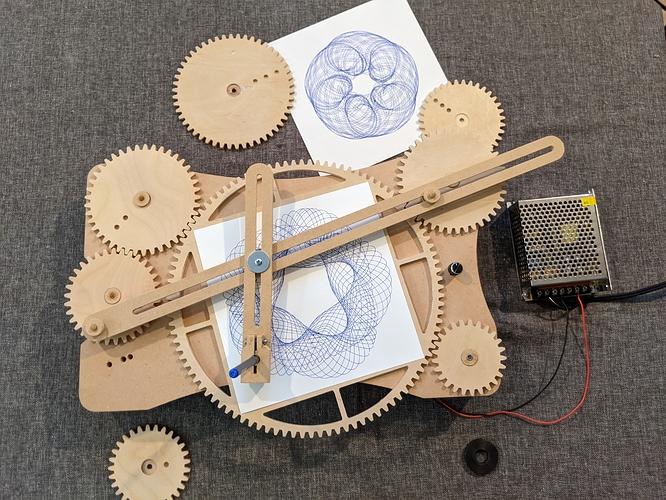 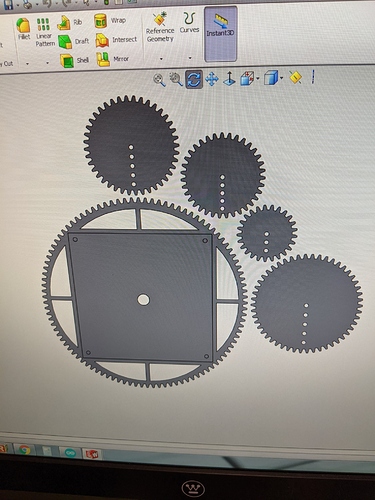 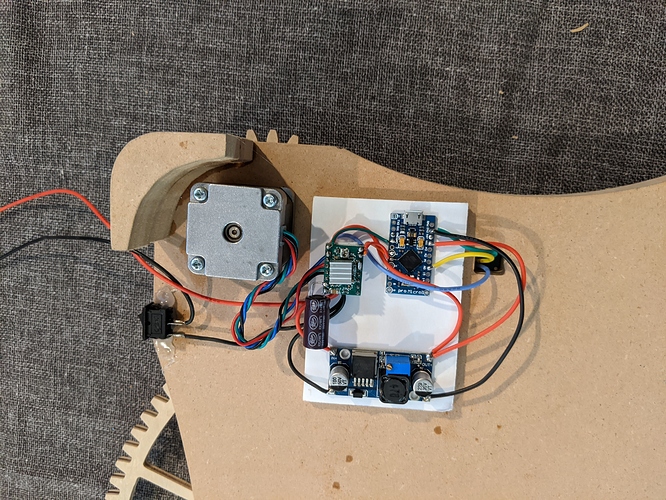 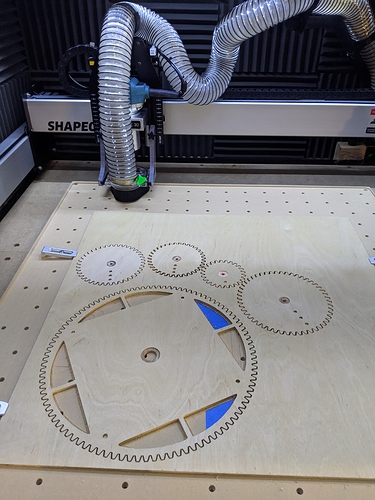 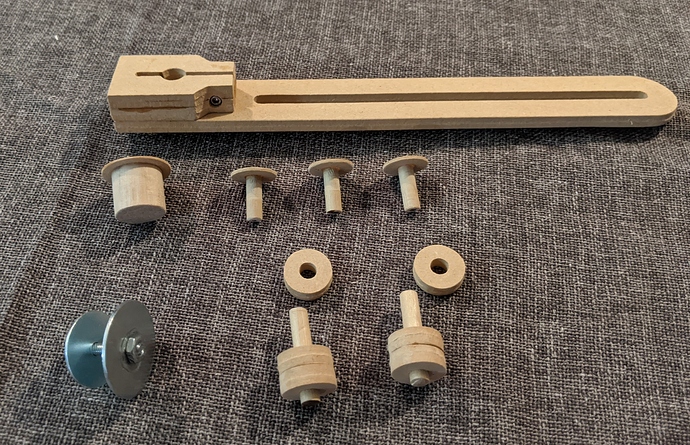 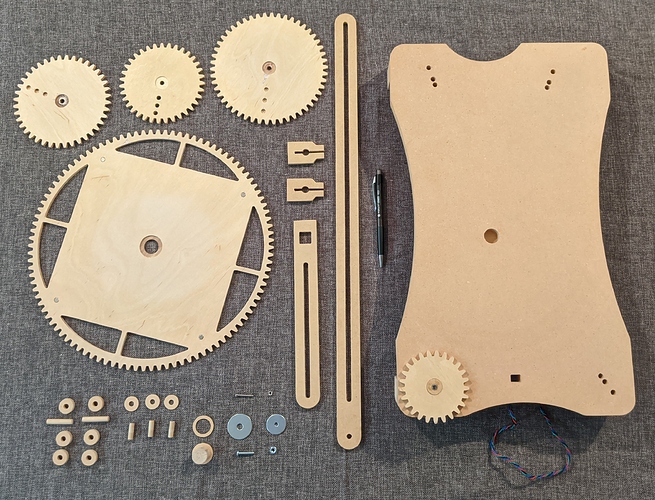 The biggest issues I encountered were the gears popping loose while cutting. The endmill would literally rotate around the gear causing the teeth to become smaller.

I fixed that for ya

(you just need to paste the Youtube link as is, and the forum engine will pick it up and show the preview)
Thanks for that very last minute entry!

Awesome thanks!! This my first contest entry.

THANK YOU all for the awesome entries, this way for the voting booth!

Awesome thanks!! This my first contest entry

Well I have now taken the time to watch the videos and this is pretty cool!
Would you mind adding details about the electronics themselves, i.e. a circuit diagram/BOM/arduino code you used ? I could definitely see myself reusing some of that in the future.

@Adam.B’s late entry and yours definitely made my morning!