Yeah sorry for that, the mix of forum upload constraints and CutRocket format limitations does not make things quite as easy as I would like.

Since you already uploaded your vector file (dxf in your post), that’s fine with me to validate the entry here (we won’t have access to your toolpaths which is too bad since this is the interesting part from the learning standpoint, but we have to do with the constraints…)

Now for CutRocket, at this point it only supports Carbide Create .c2d files or Fusion360 links (unless I missed something), so my rule about the bonus point is not fair for folks who use other CAM software. Until I find a better solution, could please create a dummy Carbide Create project, import your DXF, save that, and upload the c2d file to CutRocket? At least it will make the vector design available for people browsing CutRocket.

Thanks. I did as you said and imported the DXF file to Carbide Create then uploaded to CutRocket. I updated the post with a link to the CutRocket file.

Very cool. I like the vial for sand too. I visited back in 2019 for the first time and it’s definitely an emotional, humbling place to visit. I made a short video of my day there: https://www.instagram.com/p/ByYqAy2Hs5a/?utm_source=ig_web_copy_link

Ryan, thanks for sharing it brought back a ton of memories from my visit, such a beautiful place and the water was warm, it is hard to imagine the fear and carnage that took place on that day. Thank God for the men that stormed that beach and other places like it throughout the war for without them this world would be a completely different place.

Hi All! New to the community forums, a few IG accounts pointed me to this contest. I’ve made a decent amount of maps in the past 6 months and it is slowly becoming “my thing”. Here is a map of Lake Cordry in Indiana that I did as a retirement gift. It is 34"x26" with a custom walnut frame. 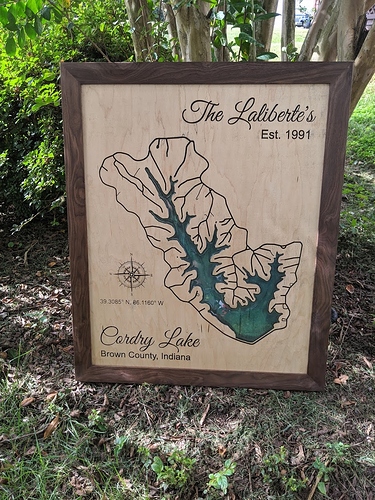 This was the first map I ever made. I have quite a few videos on my IG @timberfortress if you want to see some of the process and/or other maps. Both tips above were really important for this super detailed map of Middle Earth:
Middle Earth Map

For fun, here is an image of the Middle Earth Map I just finished. 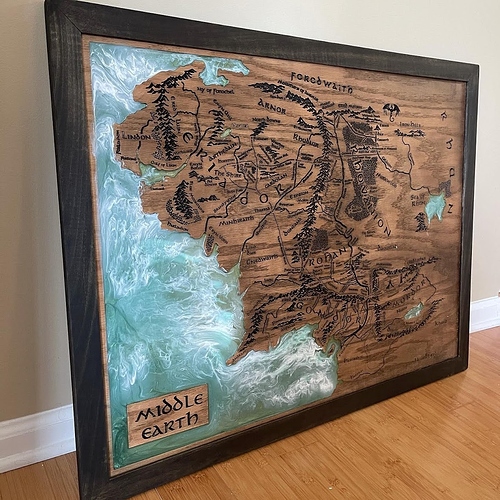 Thanks for your entry @Timberfortress, nicely done. Love the Middle Earth map too (but I’m a sucker for anything Tolkien-related, I am biased)

How was the white water effect achieved on your map? Is it white epoxy mixed in and swirled around? Looks really nice!

Hey! Yea I used white epoxy and a heat gun. It was my first try at it so I’ll be trying a few different things to improve it 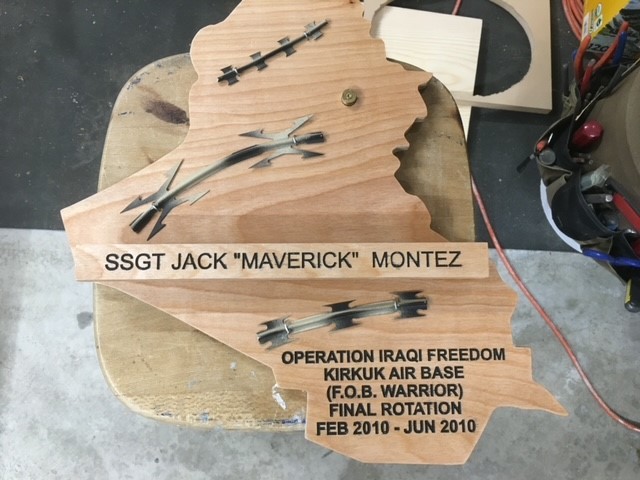 Cut out of Iraq, this was a replacement plaque for one of my troops who deployed to Iraq, I used all Whiteside bits, .25 EM DC for cut out, .125 EM DC for the shelf slot and the 7.62 round hole, and 60 Degree .25 VBIT for the lettering. The round and barbed wire are all from Iraq. Posted on CutRocket.

So conveniently, I just made a map as Christmas gift for my sister and her fiance. Map of Manasquan, NJ and surrounding area based on a canvas map they saw in a store once. Crappy phone photos (er, phone photographers) required a decent amount of cleanup in Gimp and vectorization in Inkscape. I would have loved to go with gold dry brushing for the carve and a grey/blue stain or even some epoxy to play with the depth of the carves, but the thought didn’t occur until after it was too late to attempt. Tung oil looks pretty on bamboo at least…

Right after a light sanding/machining completed

And now after some tung oil / burnishing 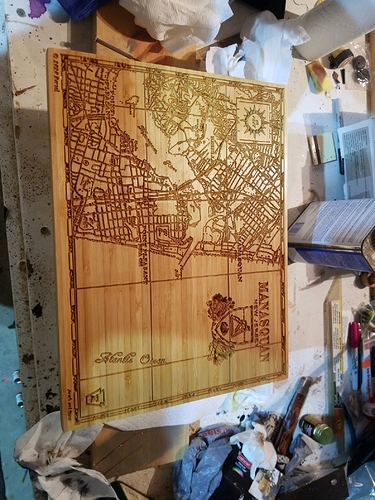 11x7.5" bamboo board from Ikea (per someone on here’s suggestion a while back) cut beautifully with minimal fuzzing/chipping. I think I actually had the CC defaults for hardwood V-carve doubled in CM for feedrate. The resin in the board holds all those fibers pretty well I guess and the hardness is on par with maple so no surprises… Really my only complaint was that my stock wasn’t the original 16x12 I had intended (I originally was going for my standard columbia forest maple ply, but then saw the bamboo sitting all dejected / neglected.

I have a terrible habit of not signing the things I make for people as gifts even though they ask for it so I have been making it a point to add a name somewhere, date, and some silly “maker’s mark” things. So you get a surname and year + some unnecessary Philadelphia references like a Liberty Bell and Ben Franklin riff. Shame the scaling lost some clarity, but I’m happy enough. C2d file is zipped up since it’s 0.8-ish Mb over the limit… Manasquan2_final.c2d.zip (1.5 MB).

EDIT: Just had a thing I figured I’d throw out to the crowd: what is your favorite finish for carving? oiled/stained, epoxy filled, paint, inlay, other?

Looks like Katz-Moses wants to get into our challenge - he even just referenced @wmoy in the video that he released 5 hours ago.

A few more maps maybe ? One week (and week-end) to go, it’s not too late to think of something you would like to submit!

Working on mine. Im only home on weekends typically and just started sunday night.

Sadly I do not have time but it’s a wonderful idea.
I plan to make a guitar with a map on the back for a long time.

I guess all of you know this website, it’s amazing the number of map you can download!!

Hoping that one of the monsters of design here will come up with something like a globe that is cut in pieces and can be assembled. Something along these lines:
4-sided Globe

Hoping that one of the monsters of design here will come up with something like a globe that is cut in pieces and can be assembled.