Growing up in the 80’s there was a game called “Crossbows and Catapults”. Rubberband powered siege weapons shot small pucks at opponents targets. Each player had a set number of blocks with which to build a wall that protected a tower, which housed a flag. Players took turns using their siege weapons to try to knock an opponents wall down, exposing the tower to attacks. First person to knock the tower over was the winner. The game was played on a smooth flat surface (kitchen floor, ping pong table, etc.) and players were spaced 4 or 5 feet apart.

Anyone interested in helping to develop plans for a cnc made version? Ideally the only pieces would be plastic army men, cnc cut pieces, and rubberbands…

A game after my own heart — I remember being disappointed I was too old to receive such a game for Christmas.

I suspect everything should be on Thingiverse already — just will need to be adapted. There’s already a ton of terrain for role-playing games, and be sure to check: Updated! My DXF, SVG, etc collection

Hmm, kit-bashing for the 21st century — please note that the above things may be different scales and will need to be adapted in a fashion compatible with their licenses (I’d suggest not doing more than looking at things and using it to draw stuff up in Carbide Create or your CAD app of choice). Actually using the above files will require a 3D CAM package able to import a .STL such as MeshCAM.

Thinking a bit more on this — one resource to consider is existing rules / games:

There should be a few more, and they should have an interest in 3D printable / freely available construction plans.

Lastly, printing things of paper and then folding them to make environments is fairly popular — if nothing else, it may provide a source for designs which you could print out and affix (for some colour) or route out as a height/depth map (for some texture).

Here’s v1 of my catapult, it has adjustable range/trajectory settings even!! 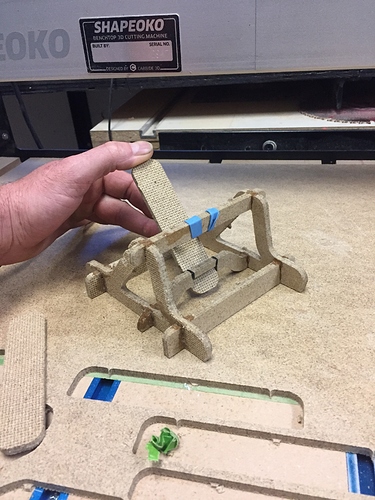