Here is a tutorial on cutting to various depths for various effects.

The goal is to make a simple open box out of a suitable material, using at least one of each tool path option.

Start by defining the size of the stock: 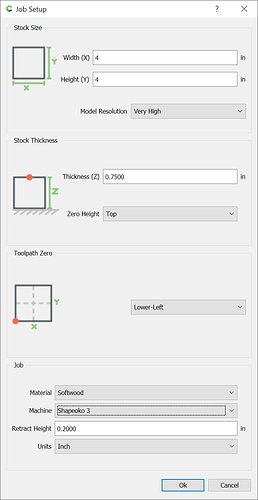 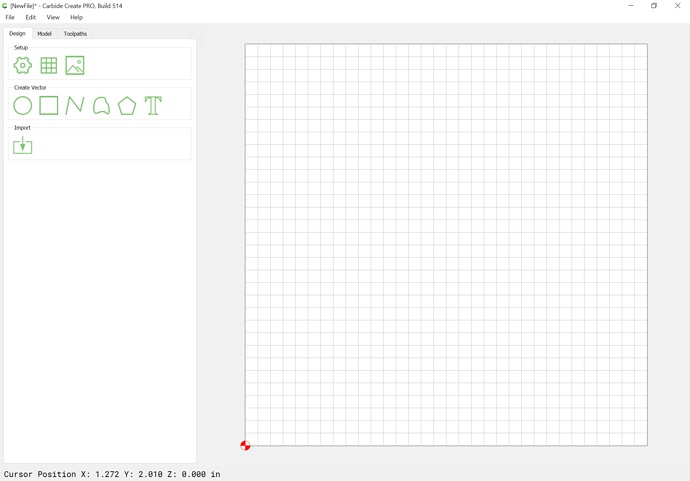 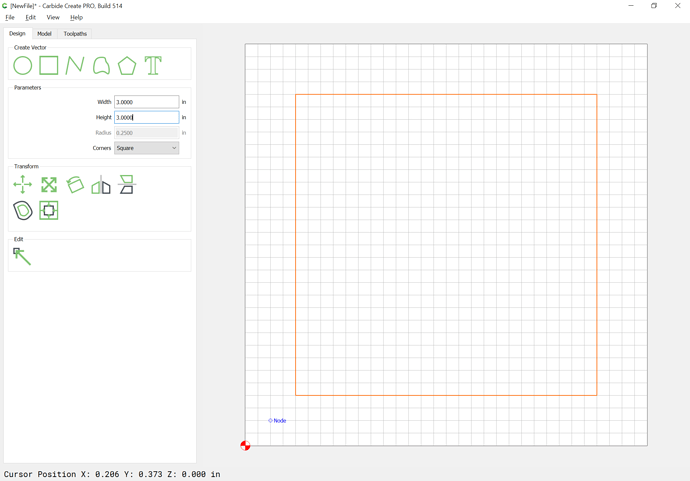 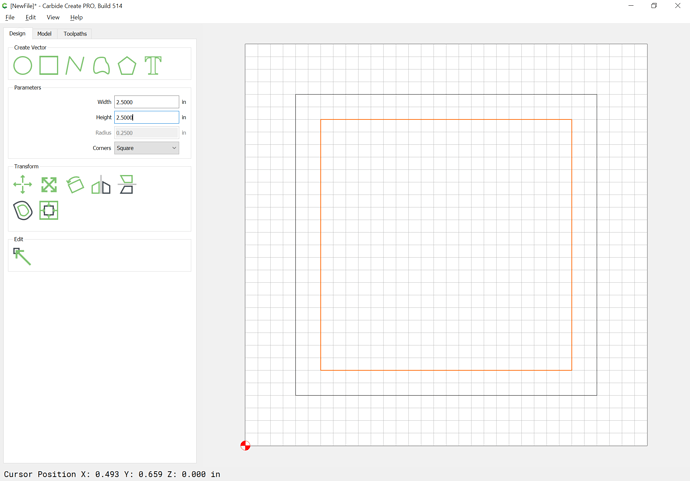 At this point, one could select the center square and assign an 0.5" deep Pocket and the outer and assign an 0.75" Contour Outside / Right toolpath and be done, but where’s the fun in that?

The first effect we want is a V chamfer along the outside edge — this will be done with a V carving and will require adding two bits of geometry, and modifying the outer geometry for a reason which will become clear upon previewing.

When chamfering with a V endmill it is preferable that the tip of the endmill be positioned beyond where the vertical cut will be made for a cleaner edge — drawing things up in profile will help make things clearer: 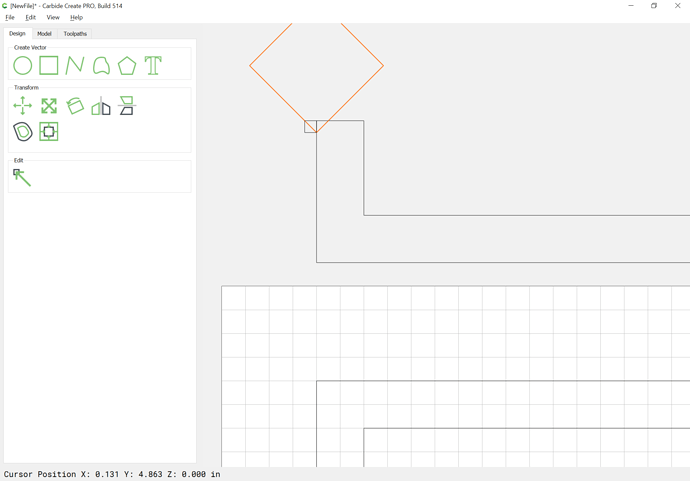 So we want to inset the rectangle by the desired 1/16" of the 90 degree chamfer, and to the outside by a bit more: 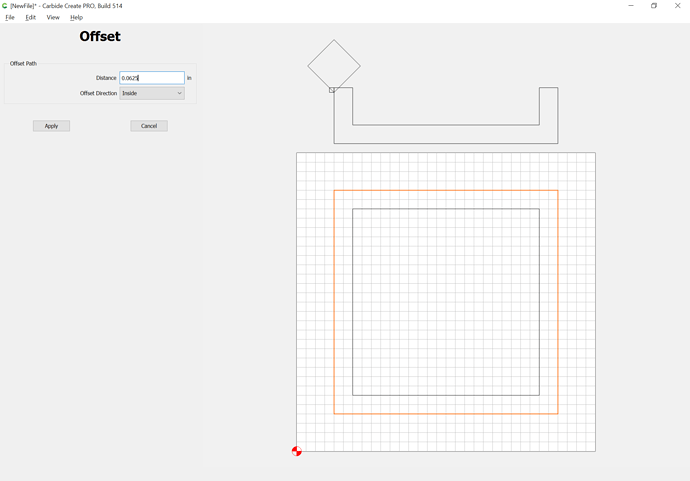 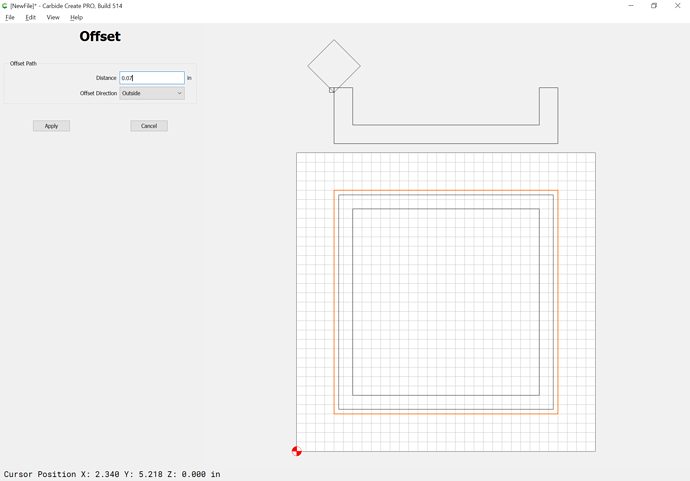 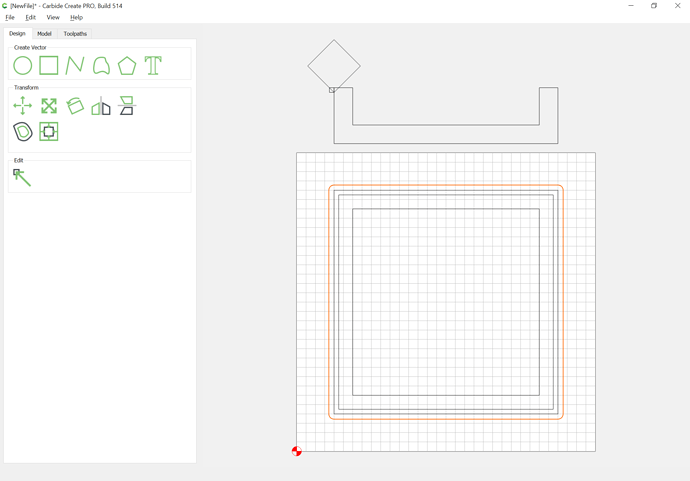 and when we select those two paths and assign a V carving toolpath which is allowed to cut as deeply as it ought we get: 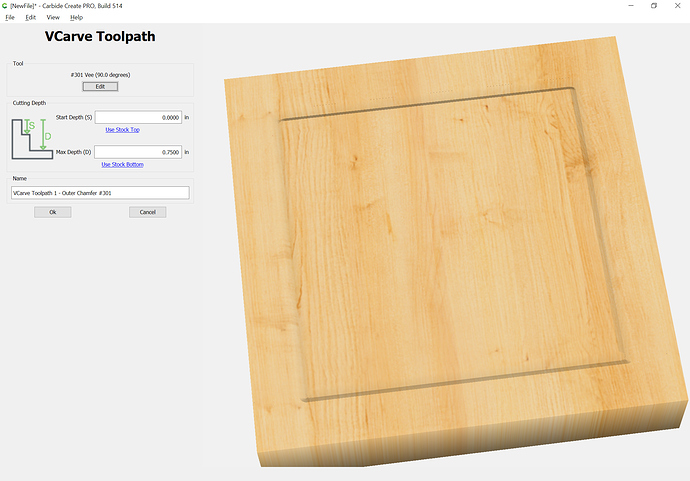 and when we zoom in on the preview of the path which will be followed we see a rounding at the corners: 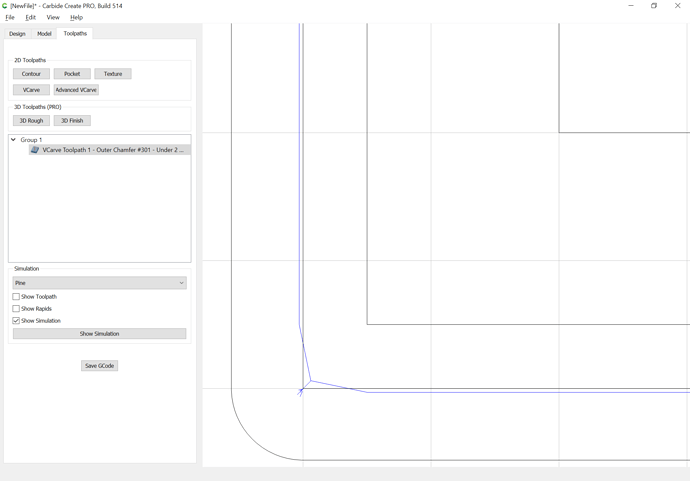 which will require rounding off the outer geometry to match: 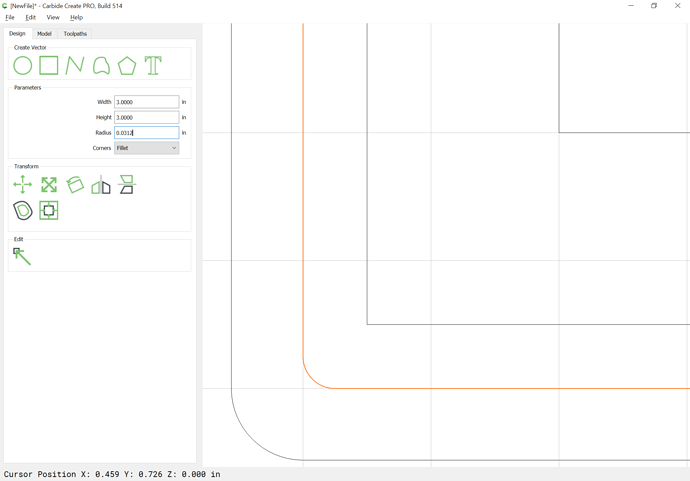 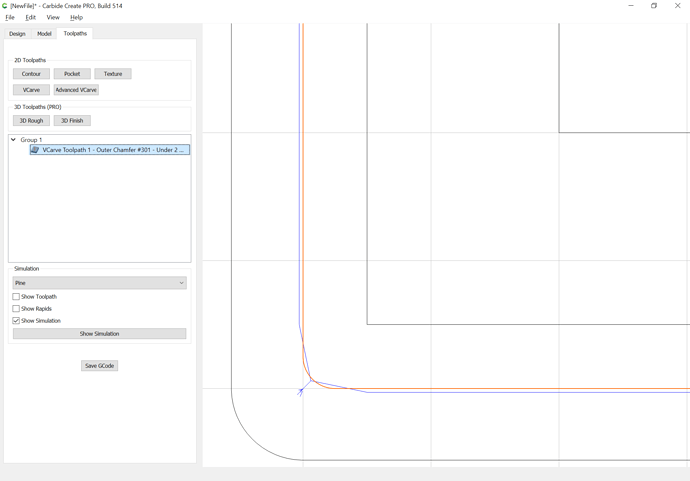 (that radius value may require a bit of adjustment)

Next, we cut the central pocket — we want this to fall a bit short, since we want to round the bottom with a ball-nosed endmill, but it’s initially a simple selection and assignment of an operation to cut to the appropriate depth — again, drawing up the cut in profile will help establish how deeply to cut: 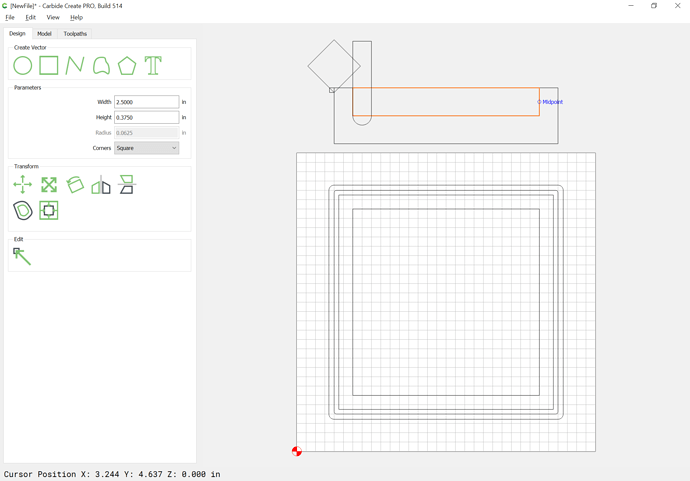 Select the central geometry and assign a Pocket toolpath to a depth of 0.375": 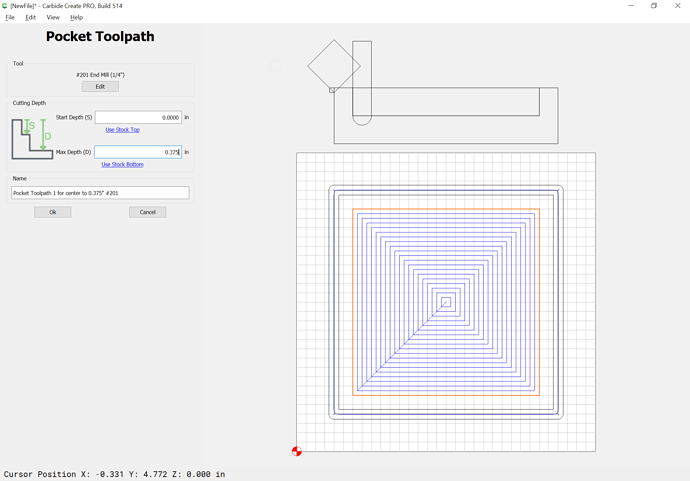 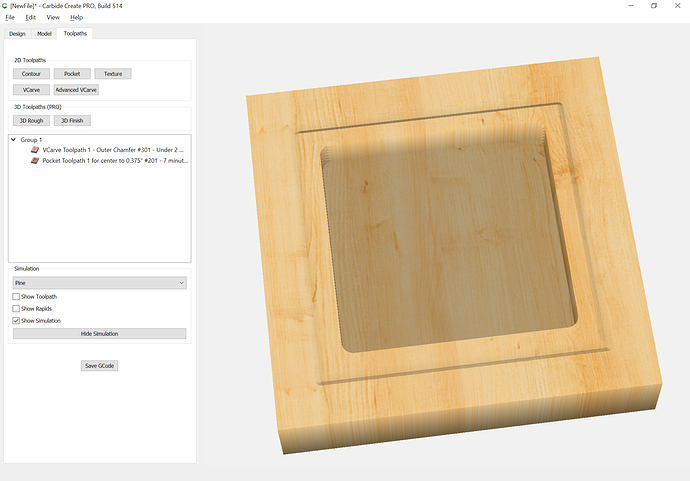 Next, select the same geometry and create a Contour | Inside / Left Toolpath which starts at the bottom of the previous pocket (0.375") and cuts down deeply enough to fully define the rounding (an additional 0.125", the radius of the ball-nose, so 0.5" deep): 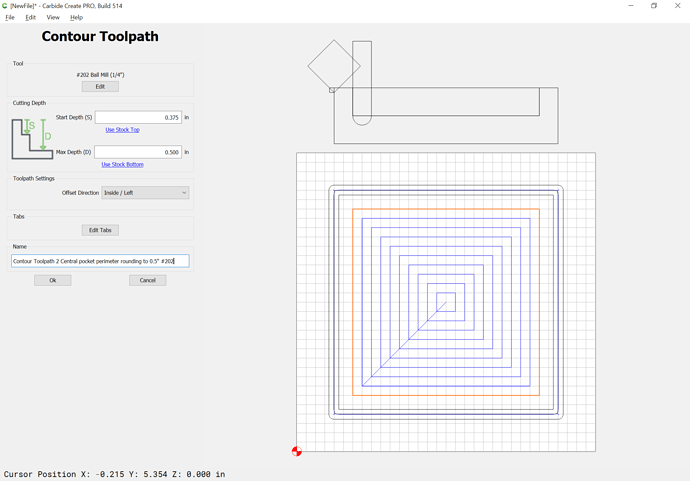 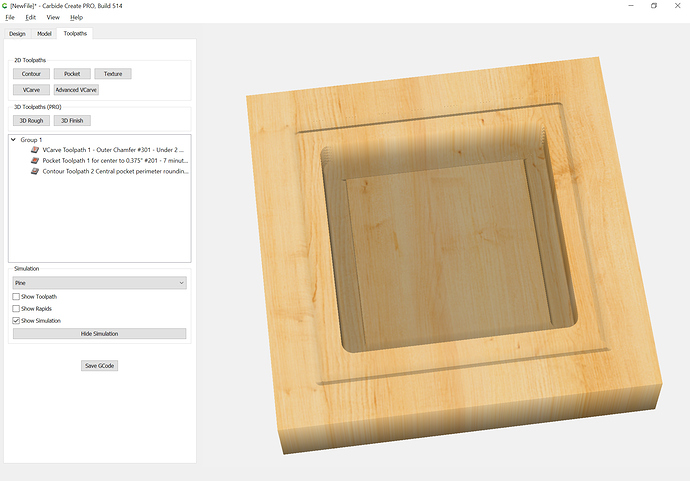 Next we finish cutting the bottom of the pocket — first, inset the geometry by the radius of the ball-nosed endmill: 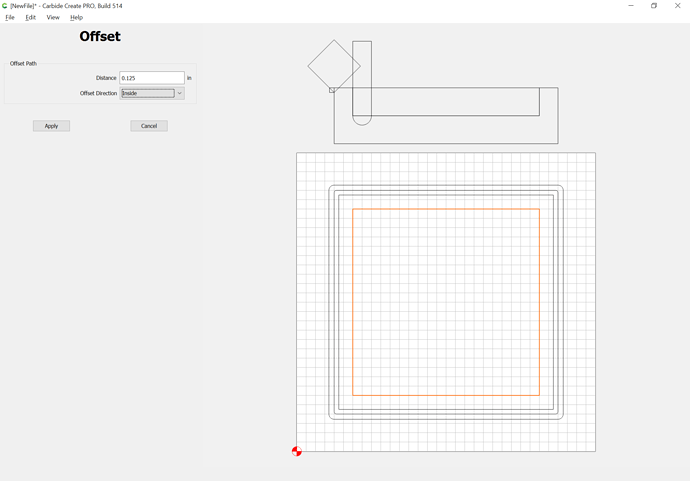 then select that geometry and assign a Toolpath which starts at the bottom of the pocket and cuts as deeply as the radius: 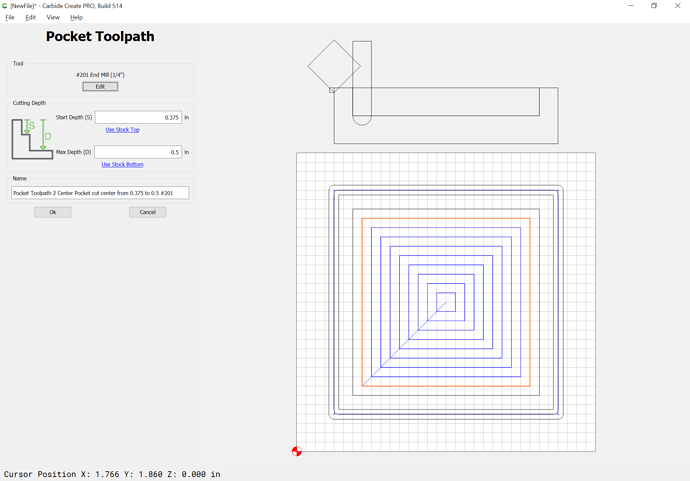 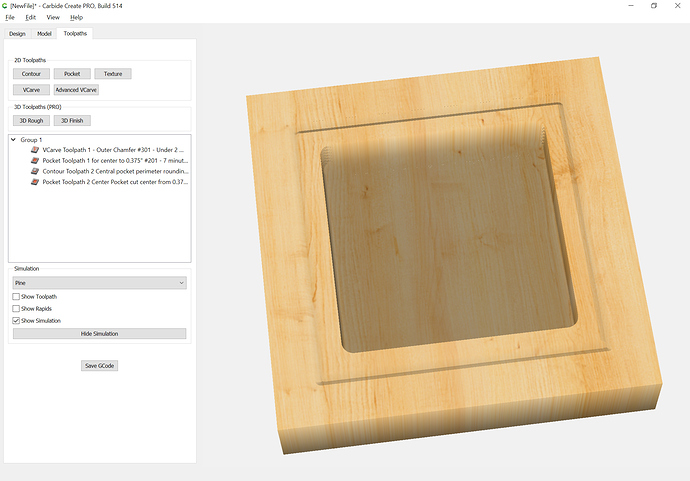 Next, we ornament the bottom with an incised design — first, draw up the design: 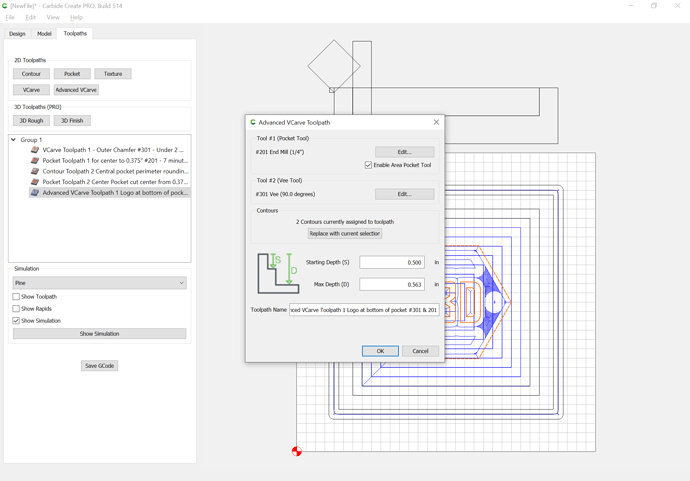 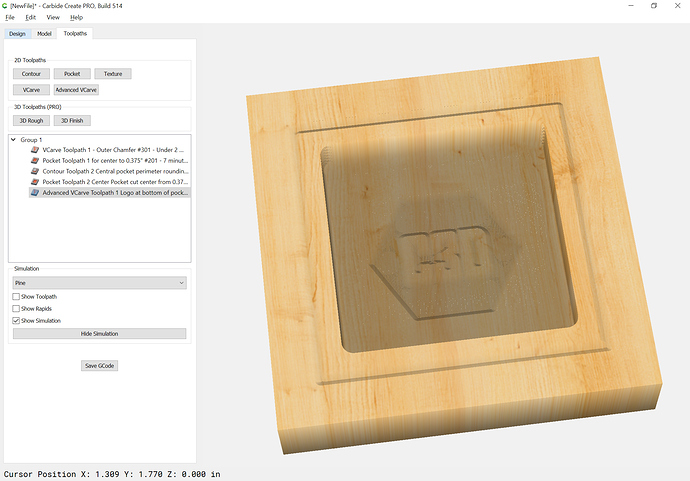 To create some visual interest around the design, assign a texture toolpath which starts at the bottom, and doesn’t cut too deeply by selecting the hexagon and an outer geometry inside that which defines the lowest cut (0.5"): 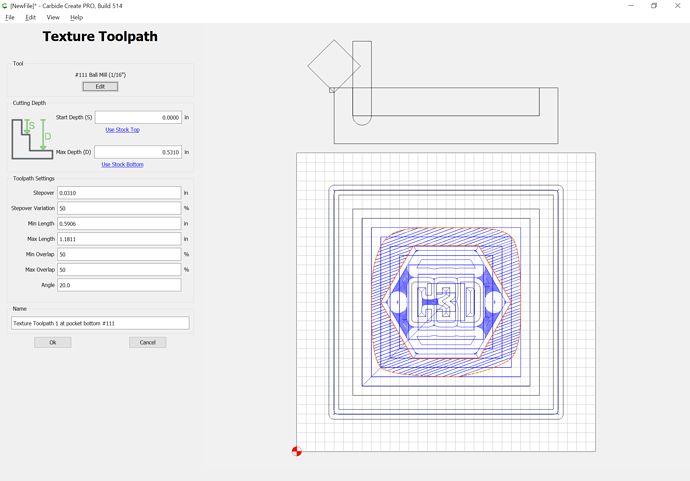 Note that this may be a close thing depending on how long your reach is with your selected endmill, and how wide your collet nut is — it will probably be necessary to at least remove your Sweepy if using that for dust collection (or lift it up or use the transparent base if using v2.0) 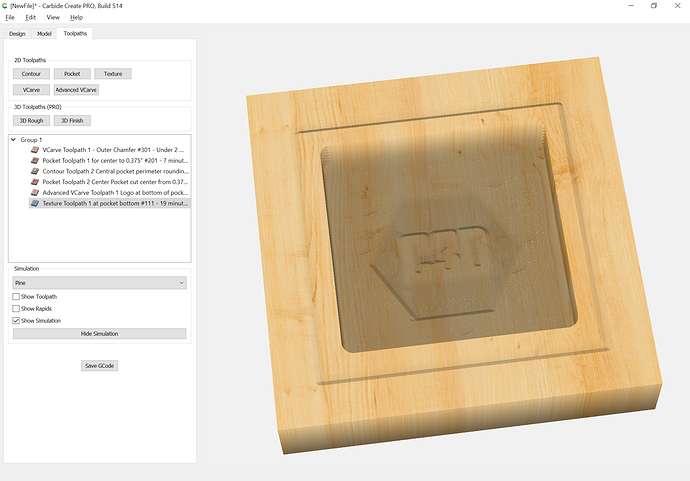 Lastly we cut out the outer profile — while this could be done as a slotting Contour | Outside / Right Toolpath, it is best to add geometry and cut as a pocket down to at least tab depth — another consideration is leaving a roughing clearance and making a full-depth pass for the best possible finish.

First, offset to the outside by the desired roughing clearance: 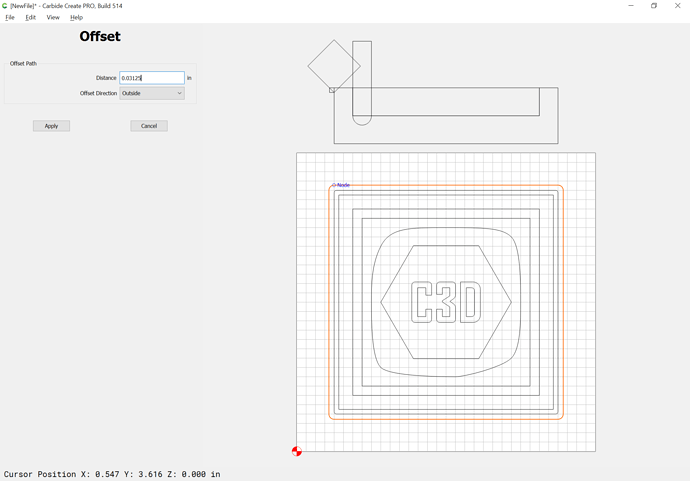 Then offset again by the endmill diameter plus 10%: 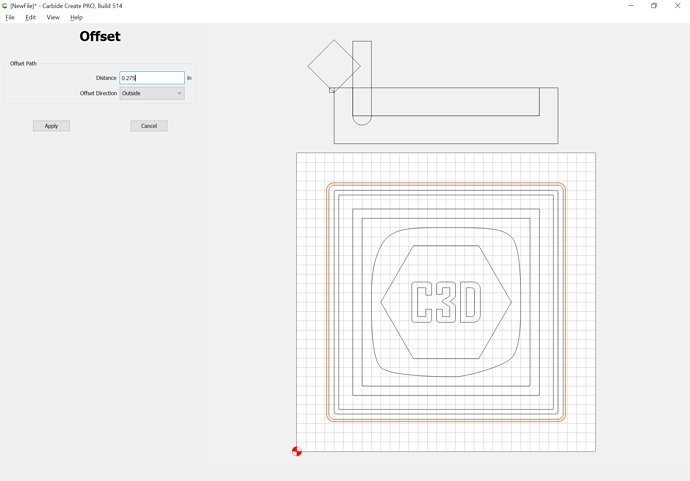 Then select both and assign a Pocket Toolpath down to a depth which will leave the part fully secured: 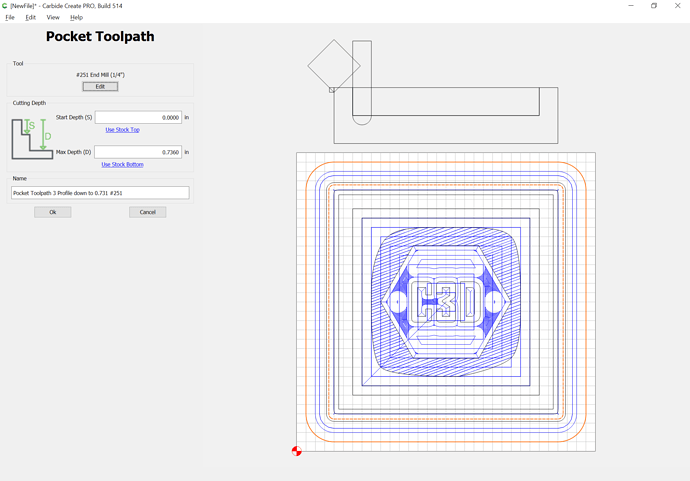 Then select the actual outer profile and run a full depth cut which starts at that bottom and will cut through the part: 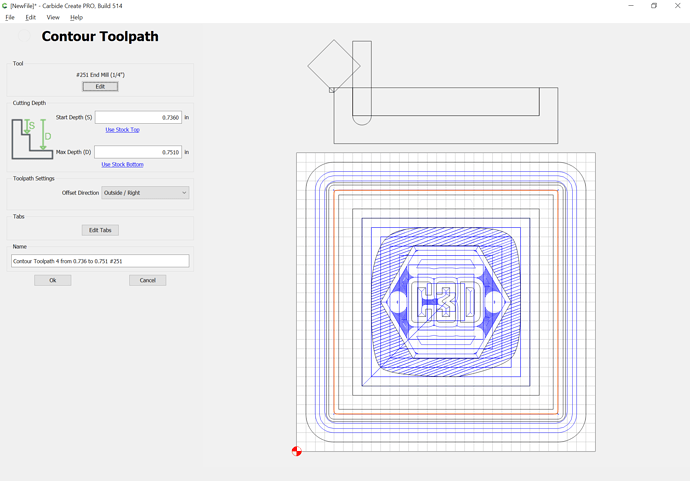 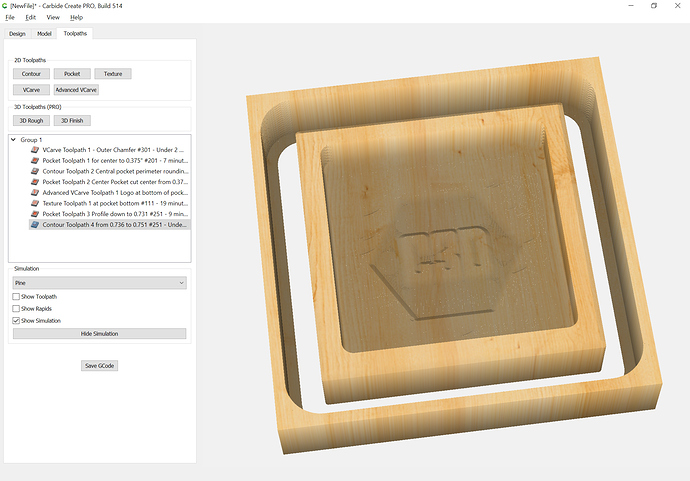