Check out this feature in Estlcam. https://www.youtube.com/watch?v=ApBfHW7AhsM

@Tominator beat me to linking that video. Aluminium foil over the surface to be mapped, a pointy metal probe thing, some generated G-code to move the probe over a predefined area of points and ask GRBL to probe there, and then post-process some G-code file to modulate Z depth based on that map. It may take @fenrus a good 30 minutes of work

Joking aside, this has been on my todo list for ever, I’ll watch this thread with interest. I would probably not shell out $300 before having tried the cheap way I described above, but being able to probe any surface without the aluminium foil step, that would definitely be more convenient.

There’s some quite serious fundamental limits to what can be achieved with this sort of probing vs. some form of optical / beam scanning.

Using the 3D scanner techniques as Arjan suggested allow for a very large number of data points to be acquired without the delay of physical movement to get to each one. They also generally work from several or many angles allowing them to reach undercuts and shaded areas of the part. A quick look at the output from photogrammetry systems though shows the limitations of this and the amount of manual repair that’s necessary.

Using a physical probe we have the issue of the time it takes to get a data point, we are talking hundreds of milliseconds per point, whereas imaging techniques typically read millions of points in the same time. Resolution is king when it comes to acquiring a useful 2D or 3D image, even just scanning text from a document a few hundred dots per inch is required for decent reproduction. At 500ms per point and 100dpi that would be 1 hour 20 minutes per square inch. Scale this up to a 3D surface of an object and you are talking about very large data acquisition times, even if we forget about the need to rotate the part accurately about at least 2 axes to reach the occluded areas with the probe.

Where these probes are useful is

So, summary, probing is for scanning electron microscopes where your target is smaller than the wavelength of the light you are using, above that, imaging is king.

Yes, this is basically what I am talking about, but as @Julien pointed out, it would be ideal if it could be done without the tape. Especially if the surface is more complex than a simple mouse.

@fenrus your tools have definitely made me think more about developing the ability to map a surface accurately. Being able to put a 2.5D carving on an existing non-flat surface or to carve out the shape of an item would be amazing. How do good are the phone scanning options?

I agree that optical would be the best for speed and accuracy. But the reality that optical scanners are extremely limiting in their price per cubic inch of capabilities.

Ideally, the concept I have in my mind isn’t one that would probe in a traditional sense. But would simply travel over the surface while taking measurements. I mean, I have a 30$ micrometer that can display measurements instantly down to .01mm. It wouldn’t be very difficult for me to reverse engineer it, to the point where I can connect it to a spring loaded probe that could simply output it’s readings as it traverses a surface. The real trick, as I see it, would be to translate that digital output in such a way that it could be integrated with the coresponding x y coords in a g-code format. Currently, I wouldn’t have an idea on where to begin with that.

The real trick, as I see it, would be to translate that digital output in such a way that it could be integrated with the coresponding x y coords in a g-code format. Currently, I wouldn’t have an idea on where to begin with that.

For the capture itself, and while it’s not quite what you describe, I did a little experiment back when I was obsessed with X/Y belt calibration, with an arduino acquiring the digital output from a cheap caliper.

I imagine one could do the same with a digital dial indicator, that you would drag across a surface (sounds scary…and would only work for wavy/continuous surfaces)

After collecting the data, it all depends on what you want to do with the mapped surface ? The main value I see is what is shown in that EstlCam video, i.e. carving/milling on a curved surface.

Having only day dreamed about it, I can imagine the reality would be a little different. If you look at the CNC shark duplicator, it has what looks to be a small rubber ball on the end to glide over the surface and theoretically rise and descend with the contours. From the videos I’ve seen, it’s capabilities look really cool. But the reviews indicate that it’s construction is lacking.

My intensions would be to be able carve on an unlevel surface, be it curved, or just an imperfect piece of material that I didn’t want to surface before cutting. Like engraving on veneered plywood. It doesn’t really lend it self to being surfaced.

I also like the idea of being able to get the profile of an object so that I could carve it’s inverse. For example, recreational pot is now legal in my state. If I could find a way to “scan” for a lack of a better term, the contours of a glass pipe, and make a custom stash box that is designed specifically to hold that pipe, I think I could finally start making a decent profit with my Shapeoko. Signs and Flags are cool and all, but they are all over Etsy.

makes me wonder how accurate one of these is: 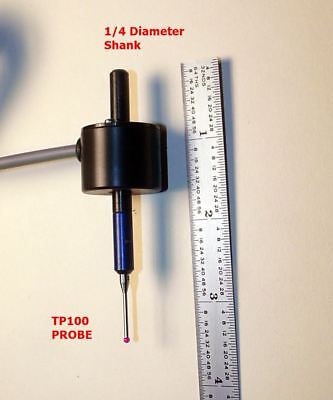 It is used with CNC milling and CNC routing style machines to digitize surface and contour data. When used as a probe the shank is mounted in a spindle collet or chuck or other holder parallel to the spindle axis.

Yeah, that looks exactly like the one I referenced. There are a few different ones out there. But none have much information and the the CNC Shark one is the only one I could find reviews on, neither of the reviews I found were very good.

the video in one of the listings (https://www.ebay.com/itm/CNC-3D-digitizing-touch-probe-3axis-SET2-tip-3mm-NPN-NO-NC-MACH3-scripts/203027707402) clearly shows that this is not a fast process… now one can likely write software that first does a rough scan with probing from a relatively safe height at a coarse level, and then do “in between” probes that come from a much closer tot he surfae height… a bit like how the bitsetter probes.

but either way it’s not going to be a fast process… (but it’s machine time, not human time)

and *** now I have gotten it in my head that this allows one to probe a non-flat glass object, and then use a diamond drag bit to engrave patterns into it, like putting text on a vase

It’s free as long as it can be tied to the z information from the probe. I’ve been too busy coding in VBA for a work project to get into your kind of coding yet.

I really think that there has to be a way to build a probe that could travel up or down across a surface at a steady pace and take measurements. The touch probe method is obviously much easier as it only requires a single point of contact as opposed to one at every increment of measure. As that complexity would take time to engineer and add a lot of points of failure into the equation, it is not anything I will be building anytime soon. It would probably be just as cheap to go optical at the point of making it.

As for the time. I am sure I am not the only one with mandatory quite times for my equipment. At least until I sound proof my dust collection system. So, if it took a few hours in the evening /early morning to profile something, I could be ok with that.

Would it be better to have it so that you could adjust the step over per pass, or to have fixed step overs, and adjust the number of passes so that the retract height could be adjusted dynamically? If by the second pass, you know within a few mm where your height is going to be, does it need to retract the fill 1.5 inches for each probe? Also, would you be able to give it a bounding box. Like we know the object is no more than 6 inches long, 2 inches wide and 1.5 inches tall. so start here and don’t go searching all around the table.

There is a link to the plans for making a similar unit on the wiki, I believe at:

A further thought here — if Carbide Motion now expects a 1/8" blank when probing could one take advantage of that with such a digitizer probe having a 1/8" ball tip?

HAHAHAHA, I am never far from the opening of a dangerous rabbit hole myself. My mind often thinks up random stuff, that I just know would be possible, and really cool, if I just had the time to invest.

yup and you can do automatically finer and finer probes until some accuracy is hit… and around edges this would end up finer than on relatively flat spaces.

I had a Shark and sold it. The properirty Shark software for mapping the surface had you load the project, for size, then checked in 5 spots. The center and near the 4 corners. The feature is marketing and in reality was useless.

sadly the rabbit hole opened, and ebay had a not too expensive one…
and I want to write the probing software for it now

Phew, I dodged that bullet/rabbit hole, I had my finger on the order button, and somehow was able to control myself this time. Knowing that you’re on it will allow me to delay that impulse purchase further. Thanks