Totally not SO3 or Nomad related topic, but I know there’s a fair amount of woodworkers here and this is by far my favorite forum so I thought I might ask for your suggestions. Looking for a new drill press.

Background: I had a decent/ok floor standing drill press for several years which I lost custody of during a divorce (It was her late fathers, I left it behind because I didn’t feel right taking it and my sons were still living with her at the time). It was of Chinese origin and was always a little off, but the size and power were ok. When I started rebuilding my shop I decided I didn’t need much of a press and bought a tiny WEN 8” bench top press and it is ok, but really underpowered, especially when swinging largish forstner bits. So to wrap up a long story, I’m looking for a larger machine, with more power, but decent quality, and of course “affordable” (Haha, I know, right?). Doesn’t have to be floor standing, but could be if I can afford it. I really don’t have $1k or more laying around and if I can stay under $500 that’d be great. Prefer new, but if there’s a decent Craigslist offering, or a brand/model I should be looking for I’m all ears. Suggestions?

well I have had a Hobbo frieght one now for ten years. never had a lick of trouble with it. also I picked it up used for 50 buck. it is a floor standing one Lots and lots of power. the only thing I have ever done is weld the rack to the side of the post in a few places to keep it straight.
https://www.harborfreight.com/16-speed-floor-drill-press-43389.html check criags list in your area you are bound to find one. cheep

The brandless have poor quality control, but the price is right. The motors tend to be pretty bad, and have a moderate failure rate, in my experience. They tend to be a kit, needing work to be a good tool, but can be economical if you are willing to do the work. There are compromises, depending on the label, such as making a floor stander model from a tabletop by putting in a longer column, leaving you with a lightweight head and skinny column, making for a flimsy machine. Spindle runout can be a problem, vibration can be a problem. The chucks tend to be pretty crummy, as well, and this is a big expense to upgrade.

The branded ones tend to have better quality control and better motors out of the box. You pay for this, but it is worth it in an environment where the half day for someone to ‘make it right’ costs more in labour than the difference in price for an unbranded one. These also tend to have heavier castings and larger columns that are appropriately sized for the machine. The line between the brandless/labelled ones and the branded is fairly blurred, but I have had good results in the last few years with the Jet and the MSC labelled machines. The small Delta (big-box store benchtop model) I have, and am trying to unload as I don’t use it anymore, is a bit anemic, has too much runout, and came with a poor quality chuck.

The premium makes— Clausing, for example-- are a LOT more expensive, but you get what you pay for. The question is: do you NEED what you would be paying for? Given what you said, I would guess not.

Old iron is often a good bet, even if a little travel is needed to get it. A 40 year old Clausing floor stander with variable speed, and a 1HP motor can be had for less than $US100 in some areas, and may run $US500 or more in others. I see then in my area for about $US250 regularly. Older iron, like early 20th century industrial machines can be had for peanuts, if you don’t mind open belting and oiling the drive. Often, they need bearing work, but they are heavy, easy to service, and many have speed ranges from 2000RPM down to sub-60RPM, with torque that will strip the hide from an elephant.

I, personally, upgraded a couple years ago to a 3/4HP Clausing knockoff (20 speed with two stage belt reduction, floor stander, Taiwan made) from about 1985 for $US50 that needed bearings ($US20 from McMaster…could have got them cheaper from the bearing house, but McMaster is more convenient). I upgraded the chuck (I have spares), but the original was serviceable.

I have a WEN. It’s better than nothing, but not by much.

I have a WEN. It’s better than nothing, but not by much.

This made me laugh. The little one I have is a very small step up from nothing.

I’ve been checking out the local Craigslist this afternoon. I’ve seen a few, but nothing that is good + affordable. I’ll keep looking. Thanks for the feedback guys!

Keep looking, they’re around. Might also check your area for a used machinery place. Sometimes you can get a real gem that way too - too worn out for a business to pick up, but certainly serviceable to someone like us.

If you have any in your area, check local cabinet shops or machine shops. Quite often they will have equipment that they’ve upgraded and the old unit is just sitting there on the floor or in a storeroom “just in case.” and may be willing to part with it at a good price.

I would recommend one with 6” of Spindle travel if you can find it. I was able to get one of the Delta variable speed X5 series before they stopped production at a close out price. Not ideal, has a few quirks, but a good machine overall.

I’m kinda eyeing this PC. I have owned several other PC tools over the years, and the price is right, even on sale at the moment:

Unfortunately none in the local store, so I’d have to buy/ship and hope it’s decent when it shows up(I hate returns). Anybody seen one of these in the flesh? Any good?

Fantastic idea…wish I’d thought of that!

Found the PC at a different store about 25 miles away. Also found out I get 10% off in addition to the sale price for being a veteran. Under $300, gonna go check it out if I can get off my duff. If it’s no good I’ll check the local machine shops, if they have something it shouldn’t be hard, I deal with them everyday for my paying job, thanks for the tip!!!

Let us know how it works out!

Wish I could say it was original but I had a friend in college that scrounged a second hand lathe that way. He used that lathe to bootstrap a thriving machine shop getting a masters in Mechanical Engineering along the way.

There’s a series of books which have this as their premise — a lathe is the only tool in a shop which can duplicate itself, and which can be used to make other tools.

Funny I’ve got a wood lathe as well as a metal lathe, but I’m still buying other tools, haha!!! Actually my metal lathe is nearly new condition, I bought it around 2 years ago with huge plans, but never got fully going. My wood lathe however gets a ton of use, and I never thought I would need one.

Drill press in the house, actually in the garage. Haven’t unboxed it yet, recovering from loading and unloading it. Will report once I get it setup! 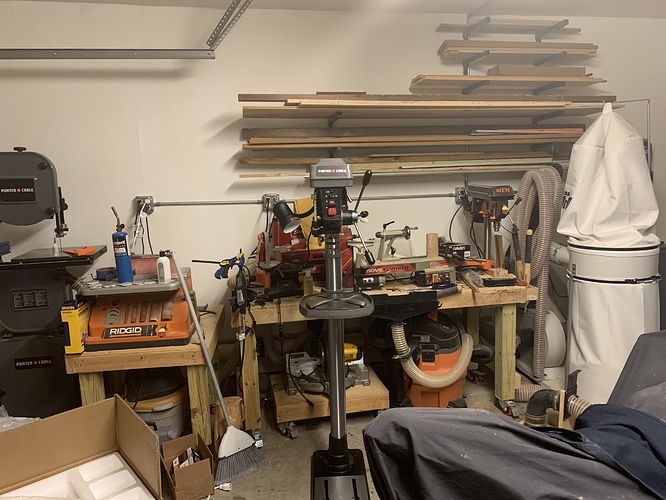 Now where to put it, I obviously didn’t think this one through? Before someone says “opposite wall?”, there’s a lathe and an XXL on that wall, shelves on the perpendicular wall, and if you look close at the lower right corner of the photo that’s a motorcycle right in the middle of the floor space. I’ll figure something out;-)

P.S. When I bought this house 2 years ago I built a shed in the backyard for garage stuff. My wife and I had several arguments as to whether I could store my motorcycle in the formal dining room (which has turned into my TV watching/office space room). Guess who lost those arguments? It’s a nice looking bike and I think it would be quite a conversation piece when people visit, but well, you know…would really free up shop space;-)

I really couldn’t beat the price plus quality and good reviews. It’s a decent bunch of metal.

I could store my motorcycle in the formal dining room (which has turned into my TV watching/office space room). Guess who lost those arguments? It’s a nice looking bike and I think it would be quite a conversation piece when people visit, but well, you know…would really free up shop space;-)

I had a riding buddy a number of years ago that kept his bikes in the house, a second floor above the garage. Only one that stayed in the garage was the daily rider. Had a 1960’s vintage cafe racer (I can’t for the life of me remember which bike it was. I don’t think it was the Ducatti) over the front door-- when the space was finished out, he planned for this. Came down once a year to go to the track. I was there when he, and several other people, manhandled it down about 10 or 15 years ago. I stayed out of the way.

The garage/shop was great to work in. Lots of room for the machinery.

In my old house right after I moved in I was sitting in the garage, wrenching on something or other. I had 3 bikes at the time and this old neighbor guys walks over, starts talking, takes a seat on one of my bikes looking like he was gonna tip over. As I’m watching him, real closely, thinking I’m gonna need to catch a bike when he eventually falls over he says,”I’ve got a couple bikes”. I’m thinking “uh huh”. Then he says “Yup, I’ve got a Ducati in my living room and a Buell in my entryway”. He goes onto tell me that he’d keep them in the garage, but there’s no room because the airplane is in there. At this point I think he’s not just old, he’s senile and drunk too! A month or so later I see an older Ducati sport bike roll past my house, up his driveway and into the front door. Jim became a really good friend until his passing a couple years ago, a little (a lot) eccentric, but no liar. There were in fact two sport bikes in his house as well as a small kit plane in his garage that he was rebuilding after his second crash(I can’t make this stuff up). He was 70 years old and a bachelor. No one to tell him he couldn’t, so he did. Miss that guy a lot sometimes, but his stories will live on.