I completed the dust shoe to mount that latest camera, I moved it to the back half of the dust shoe this time, opposite of the vacuum opening, and exactly 50mm from the endmill (which is the middle of the narrow focus range). This should minimize the amount of chips in front of the camera.
I had to move it really, really low so that it clears the bottom of the X rail/HDZ when using thick stock, so it hovers 3mm above the stock surface (which is still plenty enough on that Z-independent dust shoe) 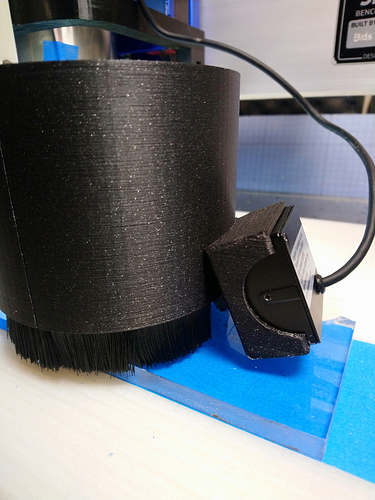 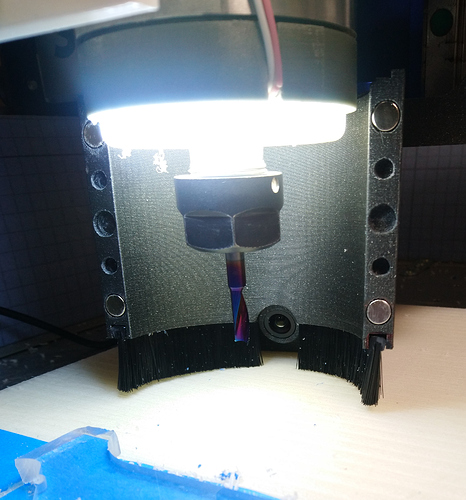 Time will tell if the chips end up wearing the lens, but for now I wanted to stop worrying and start cutting.

The interesting thing (to me) in the slowmo version is that a stuttering while cutting the sharp curve turn is visible. I’ll need to investigate whether that’s the (new) PC struggling to feed GRBL with the tens of very small G-code moves in the area, or GRBL struggling to chain those tiny linear movements and I never noticed it before because it’s not obvious in the normal fps recording.

You could insert a thin mylar or acrylic layer as a disposable lens cover so you can wear that out instead of the camera. Assuming you can’t find a UV filter that size

Much better, but I see focus problem.

This is like watching your kid finally ride the bicycle off in a straight line!

PS. Watch out for that tree!

Focus seems fine however depth of field is very shallow: 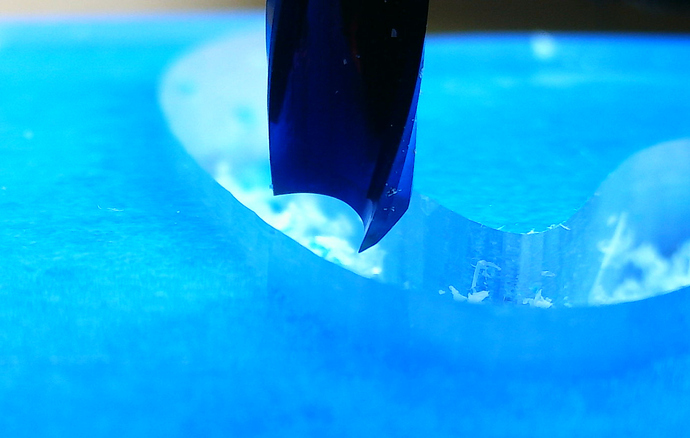 Each one of those cameras I tried has one thing it does well, and then one or two major drawbacks.
Basically I need that very first borescope’s field of view and form factor, but at full HDx50fps and the ability to do 330fps. Also called “a Unicorn”, in that price range.

In photography, DOF is deeper with a smaller iris (needing more light for the same exposure.)

Yep, but this lens has a constant aperture. But you know what helps too? Adjusting the MANUAL FOCUS RING that’s been there all along: 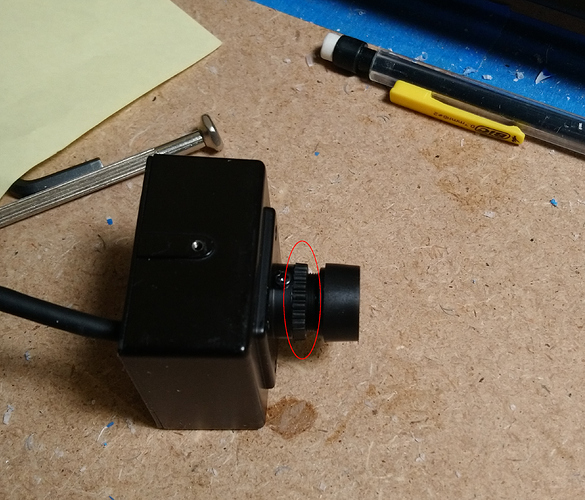 Aaaand I go back to Fusion to move the lens further away from the center point, and try and angle it better. It does look like I’m learning to ride a bike, indeed.

What would be really useful to me, once you have this nailed down, is slow motion videos of INCORRECT feed/speed settings and improper bit selection. Would be a great teaching tool. “See here, how the bit is just spinning and not cutting…”

Agreed. While the very limited 640x360 resolution at 330fps will not make it an ideal educational tool, it should allow me to capture a few bad runs (be they intentional or not) and share them.

Is an IR camera on the horizon?

Thermal imaging, I did not consider that no, it would be fun to visualize how (and where) the tool warms up. Good point but probably waaaay out of my budget range.

Aaaand I’m gonna have to use that picture again to illustrate my progress:

So, after realizing I could focus the (latest) camera where I want, I proceeded to do the Nth version of the dust shoe : 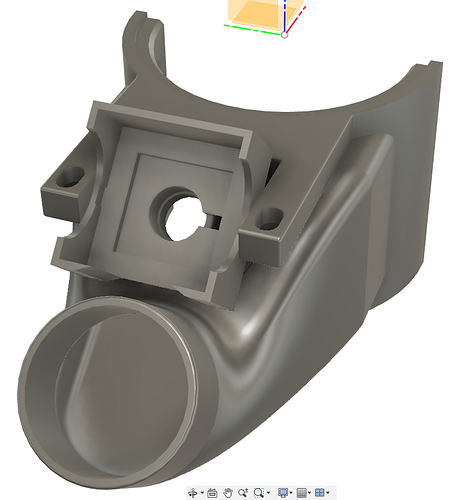 And this time around I thought, let’s take the time to add a protection window in front of the lens, I searched and stumbled upon those 40mm round screen protector things intended for smart watches: 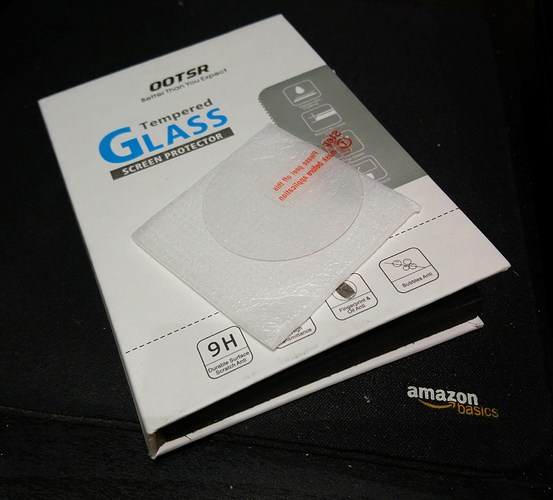 So I added support for that in the design: 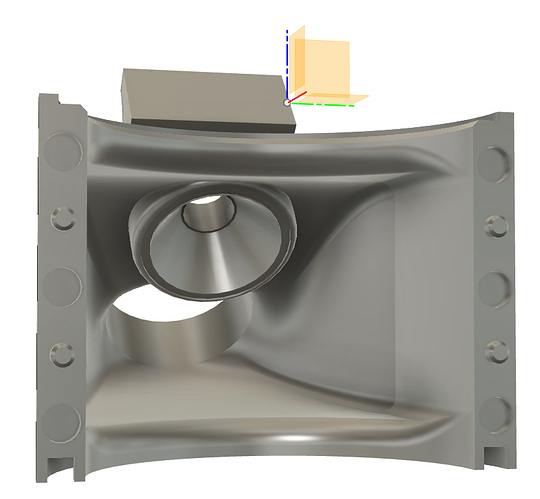 The camera is conveniently not in the way of anything else so there’s that, 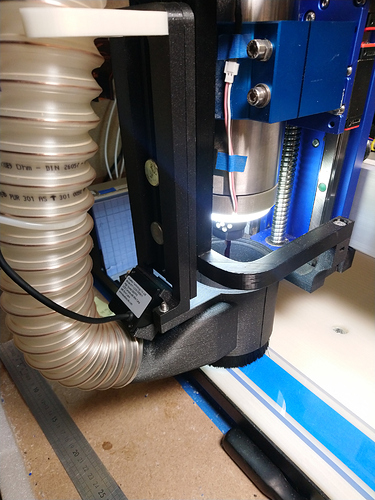 And I glued the protection glass in place: 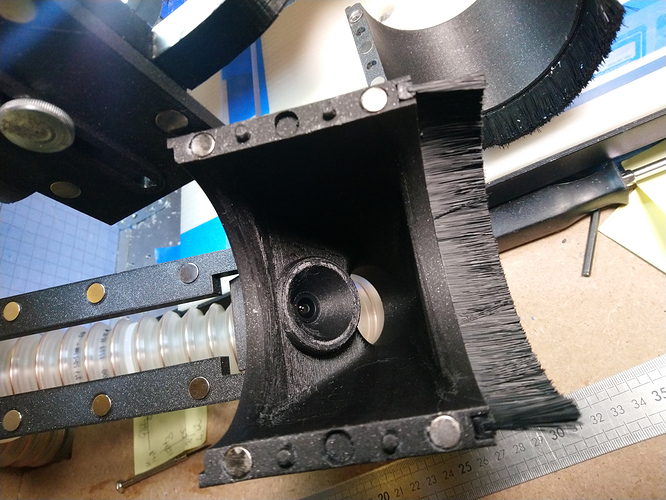 …that the glass acts like a very, very efficient chip collector: 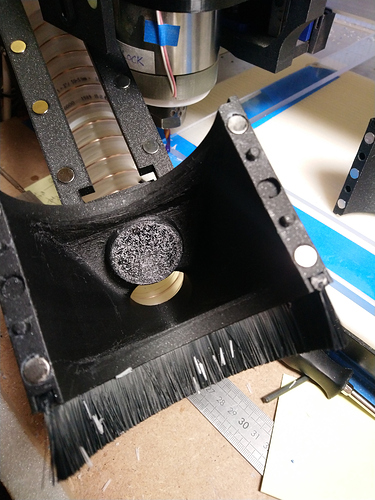 And back to the drawing board now.

Maybe you need to ground it?

Nah it was a good idea and I did not see that pb coming.
What’s really annoying is that the very first cheap USB borescope I tried at the start of this thread was really not far from ideal, just too low res. If I could find a borescope with HD resolution AND no autofocus…maybe that’s the sweet spot.

When reloading ammo, reloaders will dip their plastic powder funnel in soapy dishwater and let it dry to put a film on it to keep static electricity from building up on the funnel. It would be a simple and quick test to see if that works at reducing chip buildup on the lens.

I will try, worth a shot!

I used to do that before I got my progressive press, but I have since switched to a metal funnel a decade and a half ago.

I was a couple of months away from buying a Dillon 650, but I bought a Shapeoko 3 instead. Now I CNC and 3D print and CAD design for my “me” time.

I still have my single stage press and supplies, just in case the need to make some ammo arises though.

Until I summon enough motivation to continue fighting the cameras, I reinstalled the original one for “day to day cuts”.