I’m the newest of the newest noobs when it comes to milling in any shape and form. I’ve got a coin that I’ve designed and had minted in classic form, but would love to be able to use my new Nomad to engrave the back to increase the customization options for my customers.

I’ve dug around and looked at everything related, but due to my current studies of Geology, I’m lacking a little in the tech department when it comes to bouncing from one program to another to get a select font into Carbide Create to be able to engrave into the back of each coin it’s personal message. If someone would be kind enough to walk me through this process as if you’re teaching a freshman in high school, I’d be incredibly appreciative. Even better if you’re willing to share a Skype screen with me as you accomplish that on your machine. I know a lot of you fine folks have some good software to help accomplish all this, I wish I did as well. If you can teach me on the freebie stuff (mac), all the better until I can afford the better software. I have all the hardware that I need to accomplish my goal, just need some help with the software and set up.

Thanks folks, I appreciate the help already.

This should be simple and straight-forward, and would be covered in a tutorial which I’ve always meant to create: engraving your serial number tag.

I may have the beginnings of that tutorial somewhere, and if not, it’s simple enough and I’ll see what I can work up when I have a chance — unfortunately, I’m slammed at work (have to finish CRXs on a book in time for the proofreader to have it done by the end of the month in addition to normal work).

The problem with doing this in Carbide Create is that it re-sizes the text as it is re-keyed / entered, so you may have to fiddle with the settings, and it doesn’t have the kind of typographic control that I demand (one of the reasons I wound up learning to use TeX was that Quark XPress and other early DTP apps didn’t afford adequate typographic controls — one of the reasons I continue to use it is Adobe InDesign doesn’t afford adequate long document tools).

I think you could just adapt the techniques from the photo tools tutorial: http://www.shapeoko.com/wiki/index.php/Carbide_Create_Photo_Tracing (just replace the tools photo with an image of the coin) and the nascent inlay tutorial: http://www.shapeoko.com/wiki/index.php/Carbide_Create_V-carving_(advanced) — just set the text and apply the inlay option to that — that would just leave workholding @ApolloCrowe has done a number of things which do this in ways which could be adapted, and has done some coin modifications.

The balance of this post is intended for posterity should someone need to do production-level automated work in large quantities — skip it for now.

My inclination here would be to set this up as an automated typesetting job using a tool such as lualatex:

If you don’t have a sufficient quantity of jobs to do that, and if F-engrave affords adequate typographic controls for your needs, then it should work as well as Carbide Create, but with an interface which might suit your needs a bit better (copy-paste from a text file):

The problem with using Carbide Create for this is it’s a graphic program which doesn’t seem amenable to scripting (if it could be Applescripted this could all be quite easy on a Mac — I really wish Windows Powershell had the kind of direct app integration as Applescript does).

I’d be happy to help, but can you post a photo of the coins you are trying to engrave?

Also, do you have Adobe Illustrator, or Inkscape by any chance? If not, get Inkscape, it’s free, and you’ll need it.

Generally I work hard to avoid doing any design work of any kind in carbide create - I find it’s crashy and buggy and just not a perfect design tool (yet). I do all my designs for this kind of thing in Adobe Illustrator, with the units set to mm, and then import the thing into Carbide Create to setup the toolpaths, which it is very good at. This simplifies things a lot.

@Singularity21
First you will need to create a fixture to hold the Coin.
Heres an example:

Work Holding Solutions: The Soft Vise for Engraving How To

Work Holding can be challenging, especially smaller and irregularly shaped parts. Here is an easy solution using Carbide Create and a block of HDPE plastic (3"x 5" x1") to make a Soft Vise fixture. This design is very simple and can be modified to your needs. In this example I am holding a penny which measures .75" in diameter and attaching the soft vise to the Shapeoko threaded table which has 50mm spacing, so my bolt holes here are 100mm apart. Very easily you could modify this Soft Vice d…

I have also used the vise jaws themselves or an insert that fits into the vise rails.
Heres a custom coin video:

84 Likes, 12 Comments - Apollo Crowe (@apolloness) on Instagram: “Making a #coin from a #jpeg With #MeshCAM and the #nomadpro #howto #CNC #cookiemonster #diy #coin…”

Thank you gents for all your help. I guess I ought to explain myself a little better. In like manner to the laser engraving that Apple is happy to do on your iPod or Phone or whatever, I would like to accomplish that upon the reverse of my coin.
Here is the obverse of the coin, representing the solar system. Pick a date, and I can place the planets in their proper location. 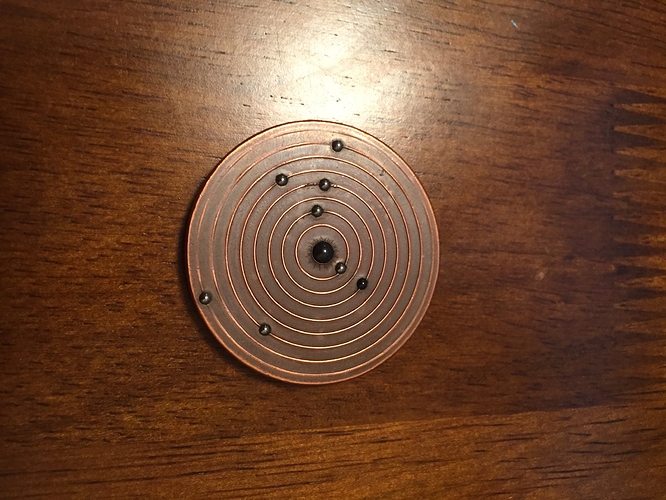 The design is there, it’s minted in through the classic process of cutting a die and pressing the metal between the two halves. This is the reverse, representing the phases of the moon. In the blank space on the back is where I would like to be able to relay to people the message they desire for whomever they have these coins made. 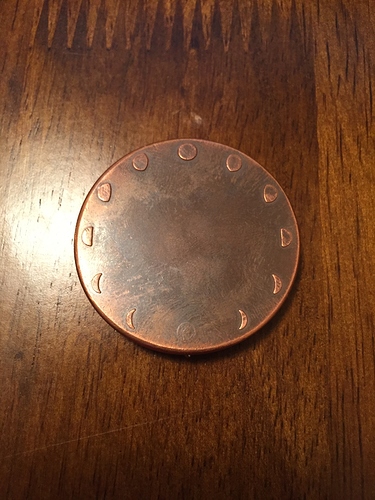 It’s simple, at some point I’d like to mess with logos, pictures, designs, but all that I need at the moment is simple text, which isn’t so simple from what I gather. Essentially just etching a dog tag or medical bracelet, on a flat surface.

I do have a fixture to hold my coins in place, got a couple of these off eBay for $15 bucks and I will have a spacer below the coin to not allow the pegs to be an issue with spacing and clearances. 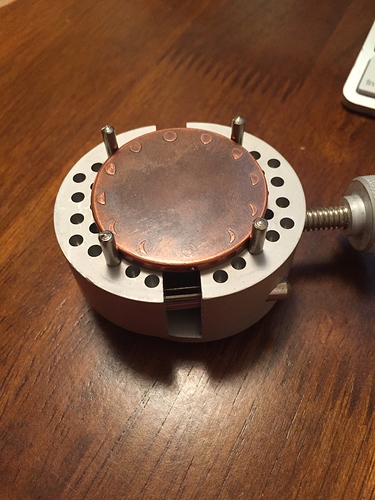 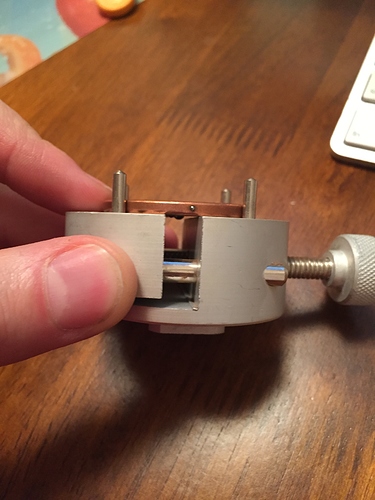 There’s this video on the topic of vcarving (using an vee engraving end mill) http://carbide3d.com/carbidecreate/video/vcarving/

Of the metals you mentioned, brass will be the easiest, I think and you could start with 8in/min feed and 1in/min plunge.

Okay, for something along those lines, I’d suggest using a programmable tool such as METAPOST or Asymptote — it will allow you to do the calculations for planetary placement, and will re-size and adjust text for placement, and you can use lualatex for nice typesetting in the calculated boxes. The tool will yield a PDF, then you can open that in Inkscape, process it, and send it to Carbide Create (or make a font and use F-engrave as I did with my dial calipers: http://www.shapeoko.com/projects/project.php?id=154 — I should re-work those as a programmable, parametric file)

Another option might be nodebox — there’s a sundial done with it listed on the wiki: https://www.nodebox.net/code/index.php/Sundial

Oh yeah, there’s a page on this stuff: http://www.shapeoko.com/wiki/index.php/Programmatic_G-Code_Generators

That’s a very cool thing. I love that you can put the planets in their correct spots for a given date.

To add text to the reverse will be very simple. Here’s how I would do it, using Adobe Illustrator – which is what I have for my work, so it’s what I use. I’m certain you could use the free program Inkscape to accomplish this just as well.

Note that this is the very simplest way I can think of to do it, and is how I have actually done very similar things.
If you like I’m happy to try to record a short video tutorial of this process, just let me know.

I hope this is helpful. Please let me know if you have questions. If it’s necessary I can record myself doing this process - it’s a very simple, probably not very elegant method, the advantage of which being that it has worked perfectly for me, many times.

Until you mentioned his name and I did some “quality” googling, I hadn’t a clue as to whom Jack Vance was. I’ll have to chase down some of his works and give them a good going over. I fall more into the Bradbury, Heinlein and Orwell camps when it comes to my SciFi literature. Massive fan of the Martian Chronicles.

Everyone should at least read Tales of the Dying Earth — his Lyonesse Trilogy was the reason I asked, there’s an orrery mentioned in it, which was what your coin w/ aligned planets brought to mind.

I’m also an Illustrator user and the method you outlined so well is exactly the way I’d also use to place the text. As you say Inkscape (free) can do the same thing but an issue would be that anyone unfamiliar with either of these programs would face a fairly steep learning curve to use them comfortably.

I am thinking about working on somethin very similiar to your project. What was the pin vise labelled to find your item that you found on eBay. This type of vise would well for Nomad 883 machining needs.

Thanks for bringing this back from the dead a little. My apologies for the delay in response, I’m sure after 4 months you’ve likely found an option but wanted to leave a slew of words to search with on eBay that should bring up all the options that you could ever want. " Jewelers Universal Work Holder Mini Peg Clamp Ring Vise Hand Held Engraving Tool "

Can’t wait to see what you’re doing with your vise.