Anyone using grbl v1.1 and jtech laser?
If so what is your opinion and any advise you can offer?
Thanks

I can vouch that Grbl v1.1 works great with JTech lasers. I’ve got their 2.8W version. I also have their 4W, but have not used it yet. The main difference is the 4W has a slightly larger spot size, which kind of negates the increased power and cuts a bigger kerf.

But, it’s connected through an older Carbide Motion board, where I had to solder the laser signal/ground into the set of large pads on the side of it. At the time, Carbide used this same old board in their Nomads and connected these pads to a daughter board to power/control the Nomad spindle. The SO3 board has changed a lot, but it should have a similar set of pads there. Anyhow, if I recall correctly, I had carefully map which of these pads were the signal, power, and ground. The power pad sent the full 24V motor voltage. Make sure you figure these out and label these clearly to avoid any shorts or damaging your electronics.

Here’s a post and pic to someone already mapping this out.

Same spot as the white board, there are 6 pads on the right side of the board below the cap. Mine is a 2.3 or 2.4 board (can't remember) Yours is marked 2.3 (lower left corner). On my board, it matches the white board below. I've got a year old nomad pro, and a shapeoko 3 xl, and that set of pads seems to be the same on both, and matches this white board, at least in this spot. On the nomad, the spindle controller plugs in there. There's a handy PWM and GND there. (Keep in mind, I don't work…

You can always use the arduino icsp header pins, that is what I have done.

I just hooked up the 3.8w jtech and was able to run a test using vectric PP and UGS. I am trying to decide which software and which grbl version to use? I am not interested in working with greyscale photos but will be switching between laser and cnc.
Thank you for your help.

If grey scale is not n issue it will not matter as much if it pauses to speed the spindle since you will only be doing black and white, it either burns or it doesn’t. The 1.1 grbl will be faster in laser mode but you will still have to play with the speeds to get consistent burns (you always do since material types make a difference as well).

I take mine on and off all the time switching between cnc and laser. I would suggest running wires with plugs to the Z axis for easy removal and not having to secure the wires on the laser each time.

As for software there are many choices out there. PicEngrave is probably the more common used, but there are others and even free ones out there as well. My software does this to some extant already (more adding into it all the time) but it doesn’t as of now have a center offset (only left bottom currently) trying to wrap that up soon though.

I installed grbl 1.1 and z axis moves no more than an inch when jogged and y axis - and + directions reversed in UGS?
I then installed carbide motion latest version and homing sends z (grbl setting=80) into the gantry? Also UGS no longer works after carbide install? Alarm error?
I would really like the features of grbl 1.1 but this is my 2nd attempt to install it and still having problems.

Before any such installation, you should take note on your system’s settings.

Shapeoko defaults are listed at: http://docs.carbide3d.com/article/38-shapeoko-3-default-grbl-settings

Yep, I did that and I went through all settings and changed axis sizes and feed rates after initial testing did not go well.
I can list the settings when I get home later.

LaserWeb is a rapidly developing laser cutting tool. It’s free, has a lot of features, and fully supports Grbl v1.1. It can be a bit overwhelming. However, the dev community is very active, so always pitch in any bugs or UI improvements to them. They will respond almost immediately.

Not sure what’s going on here, but posting your ‘$$’ settings and ‘$I’ build info strings always helps. I just upgraded my SO3 to Grbl v1.1 a week or two ago. For me, the $$ Grbl settings were reset to Grbl defaults, not SO3 defaults. I had to manually re-enter them. I used the updater here. http://carbide3d.com/carbideupdater/

Awesome I will take a look.
Appreciate the info.
Thank you

I’m glad to hear this is working. I was looking at the jtech lasers but all their installation instructions seemed to be for older boards. Not being familiar with the process I’ve just avoided purchasing it.

You can purchase LED lasers readily on ebay, of course you have to come up with your own directions for installing them, but you can get 3watts for about 129$ and 10+ watts for about 300$

If you want to read through my post it may help a little:

SO3: XL Arrived, Built, and tested!

Ok after playing around a bit here is the update. I build a laser mount for a 2.5W blue laser. It’s removable, it binds between the 611’s locking ring and the aluminum bracket. This was carved from aluminum on the SO3. [image] Following this, I burned a 30 inch ruler, which I tediously drew in CAD and then pulled into estlcam where I used the automatic toolpath and set everything to engrave. I then wrote a small post processor to change the Z depths from moving to M3 and M5 commands to turn…

OK:) can anyone with a working xxl and laser using grbl 1.1 please post your settings. PLEASE.

Anyone???Pretty Please with bells on

I realize this is late in replying but, I’ve had an attachment laser (not jTech) that I’ve used for a few years.
I use laserweb4 to generate the gcode but I can’t send it through Carbide Motion so I have to use some other gcode sender. I chose Universal Gcode Sender (UGS) and it works great! 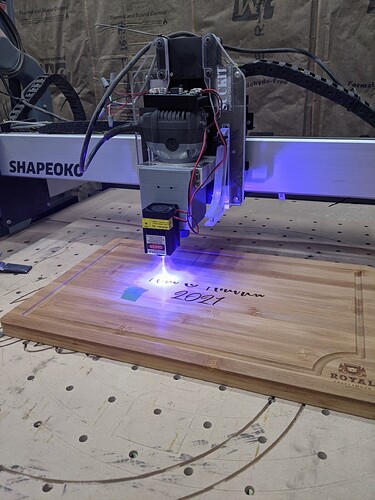