My ankles have been getting sore and I noticed the poor foot position, so I figures I’d buy some Mini Floorboards, but they cost $199. Shapeoko 3 and Fusion 360 to the rescue. 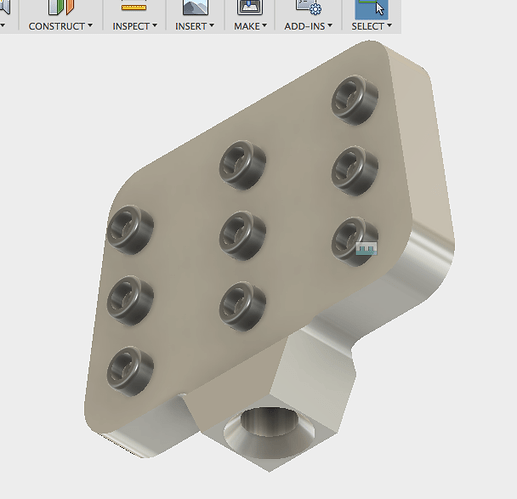 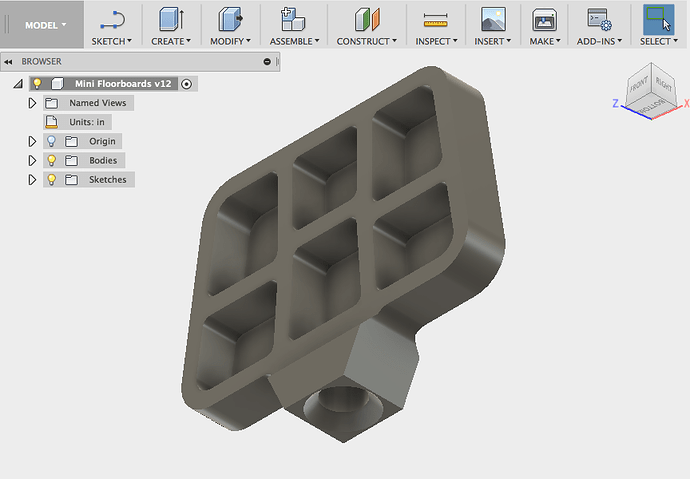 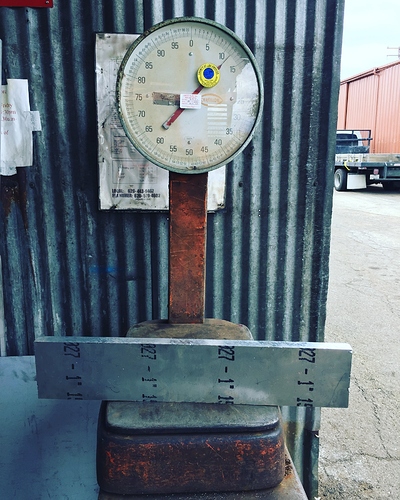 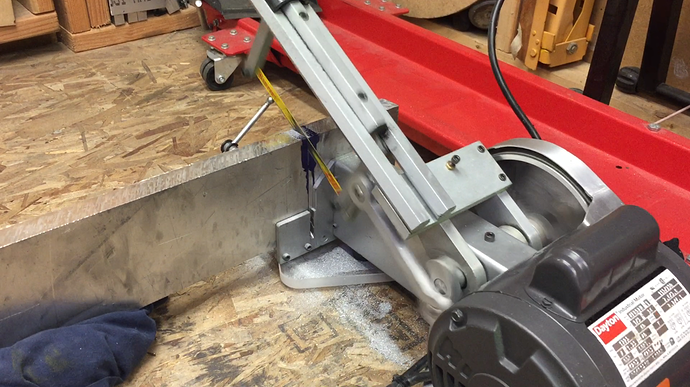 Here are the photos of Shapeoko making chips: Note: This part is machined using double sided method without using a flip jig. A total of 3 setups were used. Time to machine: about 6 hour per part. 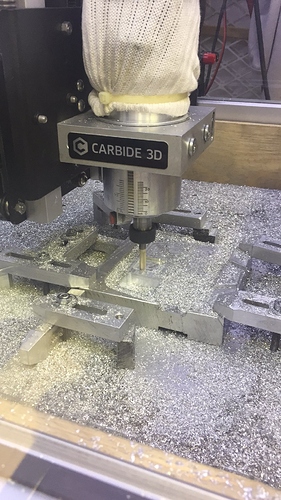 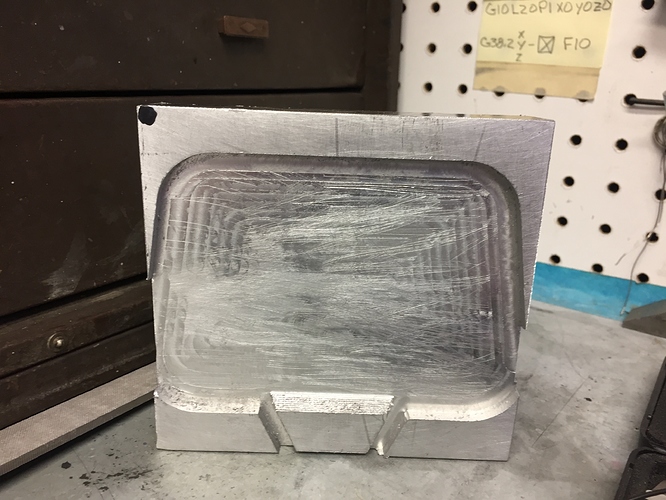 Here is this photo (below) I used some extra clamps as part stops (since I was making 2 parts. Two (2) Clamps in the back secured the Y axis and a LEFT AND RIGHT set of stops for the X axis. I stood the clamps up so that the 1.0 dimension was touching the 1.0 inch plate, this way ensuring that it would tough the highest point. The purpose of TWO stops for the X axis was to always use the same edge (even when flipping the part over. The lower and upper (as well as the front) surfaces matched with a few thousands. Good enough for the girls I go out with as they say. All in all, it was a fun and successful project. 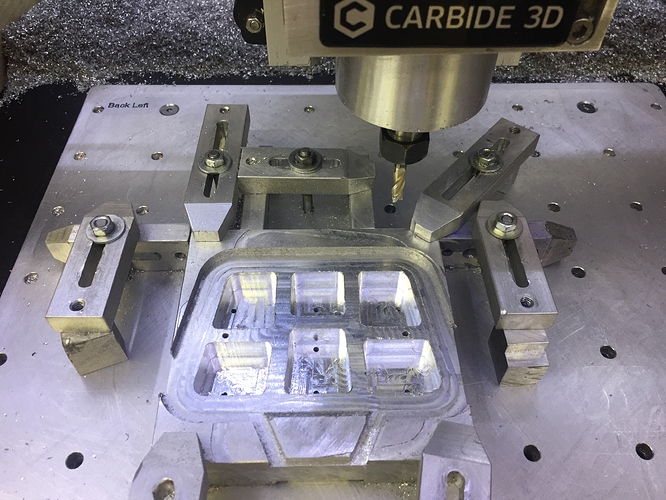 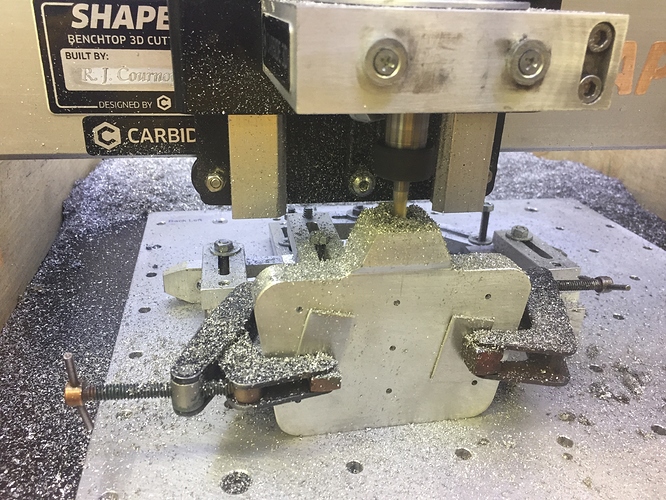 They bolted right up to the motorcycle, like they were made for it. Oh, yeah, they were… Took it out for a test ride, and they are vibration free, and feel great on the ankle. Total cost (about) $10 each. (FYI: I’ll bring them to the SF Maker Faire, along with some other things that I have made this year) I’ll polish them after the faire 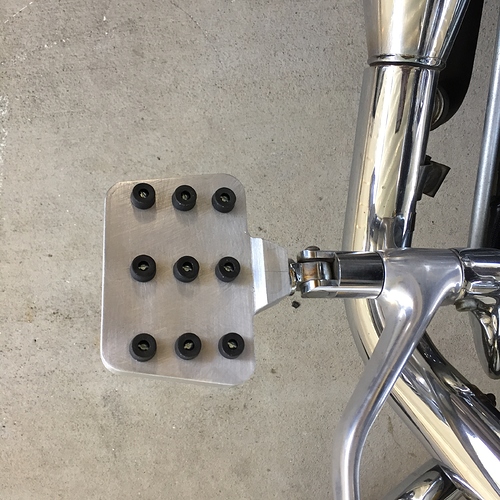 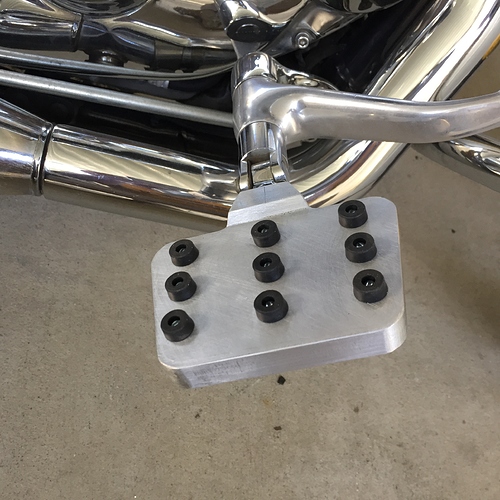 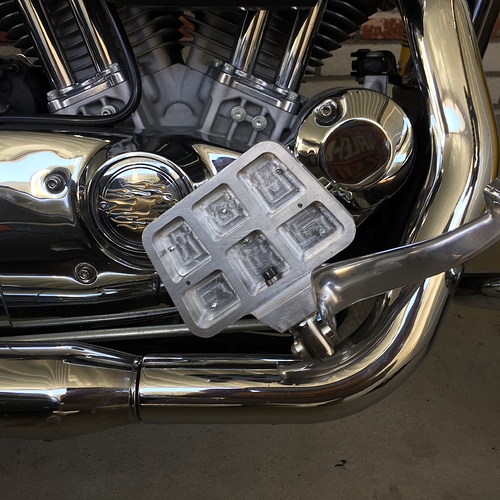 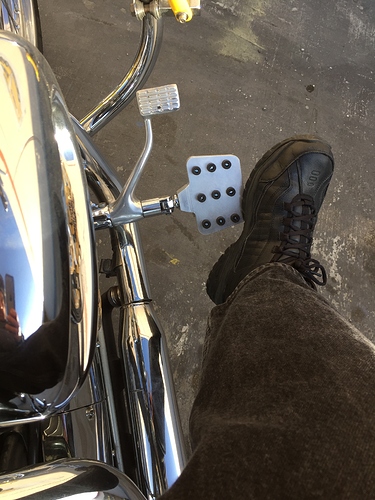 Hey Rich, any chance we get a picture of the whole bike? I know this is a CNC forum, but I’m a motorcycle tramp.

I’ve yet to make anything for my bike on my XXL, but I made a few pieces on my 3D printer for my current and past bikes including turn signal mounts, actual turn signals from clear T-Glase material and a mount for my GoPro that mounts where my turn signals used to be. Love being able to need something for my bike, then instead of trying to find something online that “might” work, I just draw it up in CAD and make it!!!

That’s awesome. I’ve been thinking of what to make for my Harley Softail. I have a Nomad, so that part looks to be within my capabilities. I already have floorboards though. I hope to make it to Maker Faire this year.
Jerry

I will but I also recommend that you follow me on Instagram where I am much more active with updates of things that I make.

Here you can see both of my girlfriends in this photo (Harley, and Mercedes) LOL 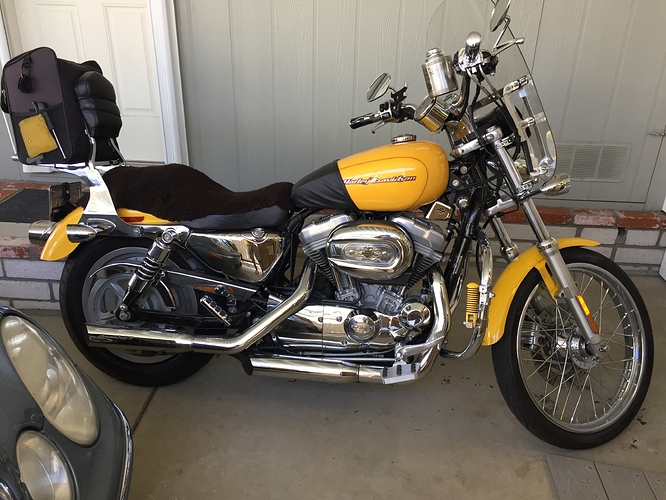 My all time favorite primer for aluminum: http://protective.sherwin-williams.com/detail.jsp?A=sku-26000%3Aproduct-6787

That really looks ready to eat up some serious road! I really like the mini floor boards versus the large ones I most often see on Harley’s and they’re two of a kind, can’t get more custom than that!!! Maybe someday I’ll get myself an old sportster or something, but for now I’m still caught up in the British Invasion with my Triumph Street Triple. I keep thinking I’ll find a bike I like better, or my 45 year old super abused post surgical shoulders will keep me away from sport bikes, but I still haven’t found “that” bike and when I’m shooting around the corners I feel no pain,…until I stop and have to unfold myself, haha!!! I saw what looked to be a restoration ready 1972 Honda CL350 on Craigslist last night for a good price, but, gurp, my wife says I have too many projects:-(

My first bike was a 70 Honda CB350. I rode that thing on the Pa turnpike when I was young and fearless. I sold my cruiser a couple of years ago. It cost me almost double to ride in Pennsylvania than it did in Virginia (insurance, registration, etc.), and then, well, my knees. I’m trike age now. My wife wouldn’t care if I went that route, but my dog is opposed to me doing anything that might mean I might not come home one night.

Not sure what year it was, but Honda Trail 90 that me and my cousin cobbled together from two dead trail 90’s. First one was sold to us for $15, second one cost $5 (a majority of both bikes were missing). Got it pretty well restored and tagged for the road. My cousin rode it to work for awhile and since I was only 13 years old I rode it in the dirt. Think we sold it for $300 still in good shape. These days they’re collectible apparently? Other than that I only rode dirt bikes until a few years ago, went through 4 bikes in 3 years and settled on the Triumph I’ve had for about 2 years. Between me and my wife 7 kids collectively, but I think the dog would miss me most too;-). Be safe out there, far too many dangerous cellphones running around!