EDIT: the issue with the Z and probe was user error on my part as explained by Mike.

I’ve tried calling and also leaving a DM on Instagram with no luck speaking to anyone. I recently purchased the HDZ to install on my Shapeoko 3 XXL. The install was pretty straightforward and easy to do.

The issue I have is in regards to using Carbide Motion beta build 417. Now I know that there is a note on the page to download the build stating that it is beta software and may not work at all.

So it starts off cutting fine and on the second or third pass, it decides to make a sharp left turn straight into my piece of wood. Essentially making that piece useless. Two different times it did that last night. Not to mention that it magically lost X/Y/Z when running the program again (when it did work correctly). I found this out when I did a rapid position to XY and also Z+6. I had my probe on the corner and it proceeded to go past Z zero leaving a big gouge in the probe.

My question is why release the HDZ for sale if the supporting software will not allow it to function as it should? I’ve basically lost faith in using my CNC for anything now being that it has ruined three pieces of wood. I hope you can see why this is frustrating for me after spending $450 on the HDZ. Now I have to change out the carriage to the stock one until an official updated build comes out. Is there any time frame as to when that would be?

I’ve attached some pictures showing the first time it turned unexpectedly. Also showing the second time it did as well. That picture also shows where it lost X/Y. I ran that program again to see if it would go left only to find it was off. It’s like it got a mind of its own and went haywire. 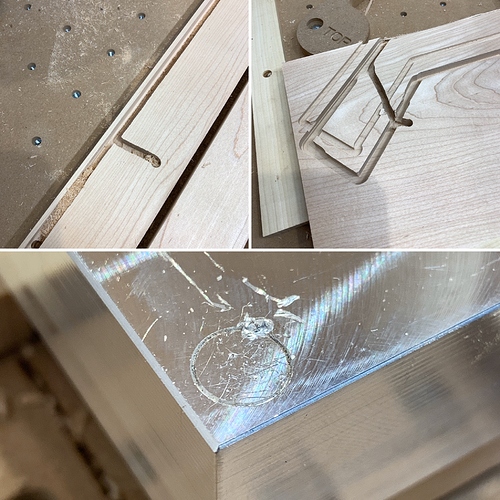 Just a note on your rapid and it messing up your probe. I think this is down to user error and not the machine loosing xyz.

Your probe is 22-25 MM thick depending on how it is sitting on the stock. So if you left the probe on the corner of work piece at xy zero and rapid to that point with a +6mm z it would want to plunge 16-19mm into your probe to get to the desired position.

When you set z with the probe it saves the material surface as the Z zero. Not your probes surface.

This is why your z would plunge into your probe uncontrollably, normally the belt would skip but your HDZ s ball screw is strong and nothing will stop in its way as long as the stepper has enough power to drive it.

Thank you Mike for the explanation on the Z+6. That makes total sense! I think at that point with it messing up, I wasn’t thinking straight and completely overlooked that. I’m going to edit my post to set the record straight with my user error. Thanks again!

Now to figure out my other issue.

Now to figure out my other issue.

My first guesses would be that your cuts were too aggressive and you lost steps. There could be something mechanical on the XY cutting that.
Another guess would be EMI causing a loss of communication.
You may also have an issue with your stepper motor wiring.

My cutting depth was 0.15” with a 1/4” downcut end mill. So I don’t think that’s what it was. If you look in the picture, you can see on two separate occasions that it made a 90° turn straight into the piece of wood away from the path.

It cut five other pieces with no problems prior to this. I restarted both the computer and carbide motion. Also turned off the power to the machine and back on. Then it still did it again. It also did this same thing last week.

This all started after installing the HDZ (by the book) and build 417. The motors were a direct swap and plug and play. I have a few hundred hours of machine time of not seeing this until the HDZ. I wish it was just something that I was doing wrong. But it just started happening after the swap.

Both of the areas where it appears to cut off path, it looks like it just made the turn too early. That makes me think you lost steps. If you run an “aircut” does the same thing happen? Did you happen to note your work position when that happened?
I’m not defending Carbide Motion, but, with all of the things I don’t like about it (I moved on years ago), in the end, once a job is running it just sends commands to the machine. It’s hard to mess that up from a software standpoint.
Could you have a loose pulley or belt after the upgrade?
Have you tried another sender to rule everything mechanical out?

I just wanted to update and let everyone know that I spoke to support at Carbide3D and we were able to solve the problem. As it turns out, it wasn’t the software or my gcode at all. It was the X-Axis motor pulley that lost a set screw and I was able to pull it off by hand. So they are sending me a new set screw so I can get back in action. He also gave me some good tips to make sure I get smooth cuts.

I apologize if my initial post seemed that I was a little frustrated. With it turning unexpectedly, I was unable to make part of my project due to having just enough wood.

Get yourself some 10mm long M3 socket head cap screws instead.

Losing a set screw or having a loose set screw happens regularly. They use 3mm set screws and are difficult to tighten enough. You can change the set screws for 3mm cap screws. I had some where the thread was damaged and I re-tap the pulley for a 4mm set screw, it provides a much better hold on the pulley shaft and for tightening the screw with a slightly larger tool.