I am installing the HDZ. Having an issue there were the wheels are way too tight even with the HD eccentrics in the loosest position. I would expect full slippage in the loose position with some room to tighten. The HD eccentrics on the Y-rails worked perfectly.

Any ideas here? The only way to get them loose enough not to feel like its going to break a wheel is to loosen the screw holding the wheel on, but then the the HDZ rocks around because the v-wheels are too loose.

May ask @ctdodge how things are working on his setup now, considering he reported the same thing ?

And/or contact support, they may be in a position to tell you whether that’s expected or not. I seem to have seen similar reports two or three times recently, so maybe they changed the HDZ design to tighter tolerances to prevent users from NOT tightening the V-wheels enough (common issue) ? Just a wild guess though.

May ask @ctdodge how things are working on his setup now, considering he reported the same thing ?

I had to start the lower screws with the eccentric nut out if the hole and then pull it in by tightening the screw, but it eventually worked. I’ve only done a few projects since I installed my HDZ but so far I’ve had no issues. I don’t know if that’s by design or defect but since it’s working I didn’t contact support

Mine was tight as well after install. However, with the machine off, I was still able to move the x-axis and simultaneously stop the lower v-wheel by pinching it between my fingers, using moderate pressure. It was a little tighter than how I set my lower y-axis wheels (also using eccentric nuts). I have about 5 hrs of machine time on my XXL now, and haven’t noticed any major issues with the tight HDZ eccentric wheels yet.
Can you stop yours tight wheels from rotating with your fingers when pushing the x-axis? (Machine powered off of course)

@AllCustomGifts One wheel is impossible to keep from rotating. The other, with almost all my finger strength can keep it still.

Guess I will run with it as is for now. I do feel like this is going to wear out the wheels in no time. Will monitor.

Has anyone had a fix for this yet? I’m installing my HDZ and there is clearly a problem, potentially in the user🙄…

I tighten the top V wheels, then I hang the hdz. When/if I install the lower v wheels I end up with an issue where I either have wobble, or free carriage movement. While the ecentrics are in their open position, I need to tighten the screws to the point where there is a tremendous amount of friction on the carriage, in order to reduce rotational wobble about the rail.
It almost appears as though the physical holes on the HDZ itself are not in the proper position. For example if I install the right lower V wheel with the screw less than snug, and the eccentric open. Then I attempt to install the left lower V wheel, and the screw threads make contact with the through hole in the HDZ. I know this type of fit all too well, it’s the type of thing where the thread will cut into the through hole to make a nut. I’ve… err…‘designed’ one or two of these in my day.
I’ve attached a picture for reference. 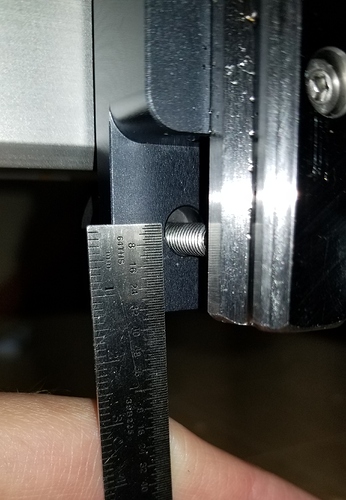 Please contact us at support@carbide3d.com and we’ll do our best to work this out with you.

Noooooo I wanted to hear “You dummy you have ____ in the wrong spot can’t you read directions?!?” Oh well off to support, who from my experience has been awesome. Thanks @WillAdams

I also recently updated to the HDZ and had the same issue. Had to use a reamer to get the eccentric nuts to fit the holes even though the finish appears to be anodized rather than powder coat, a good thing. Ended up using the reamer to elongate the eccentric nut holes holes down about .005-.006 which worked great. From Mr. C’s photo about it sure looks like it’s going to take a lot more than that.

Just curious how you ended up resolving this if you don’t mind sharing?

I thought I was the only one. I haven’t used my machine in a while and decided to re-square things up and while I was doing that, I noticed the same issue. Very tight wheels.

Anyone who has issues with this should contact us at support@carbide3d.com

I hope I will be back later with a post saying the issue is resolved, but so far, no luck. Support is telling me that it is by design.

I have everything removed, steppers, router, everything and it is still very notchy and takes a lot more effort to move along the X than the Y.

After a while, the wheels “flatten out” so that you get a flat tire feel every time the wheels rotate once (I marked the wheels and noticed it happens at the same spot). There is zero adjustability with the eccentrics.

Making them the loosest and I still cannot turn by hand, or prevent it from turning when moving the HDZ the wheel on the left. The wheel on the right I can with “maximum effort”.

The only way to get smooth movement is to back the screws out enough which causes the whole thing to flop back and forth.

Aside from getting a set of wheels with a smaller OD, not sure what else to do. I don’t have the ability to cut my own and it seems these are standard sized wheels. I couldn’t find any that are a little smaller.

Edit 2: An hour later…whub whub whub flat spots as I move it side to side.

Has anyone been able to resolve this issue? I’ve had my HDZ installed for a while and only recently noticed that I can’t get the bottom wheels to spin freely when then eccentrics are at their lowest. I don’t remember this being an issue when I first installed the HDZ, which is a bit weird.

Have the Delrin V wheels at the top of the carriage worn significantly?

Try removing the bottom V wheels and swapping them with the top?

If that doesn’t resolve things, let us know at support@carbide3d.com