Agreed, it sounds dreadful. I don’t suppose anyone could post a video of a Nomad machining some maple (or other hardwood), in long passes, at a reasonable speed, so I can hear what it ought to sound like, could they? I feel like based on the sound, this is running right at the edge of chatter.

I suppose it could be my fixturing. I’m just using the excellent Nitto Tape at present. I have prepared the rest of the blanks for this process with holes so they can be mounted to the bed with screws - since they are 8x8 they take up all space where I could use any kind of vises etc.

What is most vexing is that this did not happen for so many identical pieces, running the exact same program, and now suddenly it is. I wish I knew what changed. Could the addition of the pockets in the top of the piece be causing it to flex?

Have you checked your leadscrews for dust or dirt? Lubricated them?

Can I use Supercut to lubricate the z axis thread?

Hopefully once we can puzzle out your difficulty it will be something amenable to being added to the operating checklist: http://docs.carbide3d.com/article/41-machine-operating-checklist (should that be revised / updated / adapted for the Nomad? It was written w/a Shapeoko in mind).

The wood is pulling inward is my guess.

@ApolloCrowe Yes! The pockets are cut first. They are about 5mm wide, and stop 10mm from the bottom of the blank. Then I cut the slots, which go nearly all the way through, stopping just .2mm from the bottom. Previous frames were made with only the one larger frame, and not the two smaller ones inside it. I got so hung up on the feeds and speeds being the same as before, it didn’t occur to me what had changed. I can’t believe I didn’t think of it.

Here’s an annotated image to make it clear: 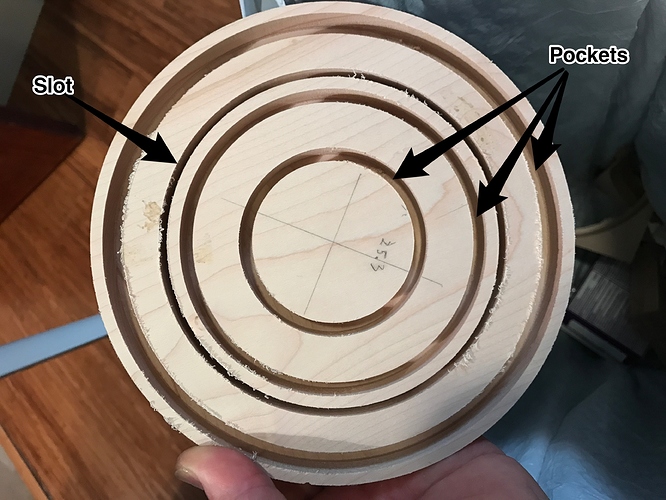 Do you think if I cut from the outside in, first doing the pocket, then the two slots to cut out the frame, and then moving to the next one inside of that, and so forth, that it would help with the issue?

Also, should I slow it down?

A pocket operation would alleviate the work grabbing the tool at depth.

Im curious if a center out would be better or not.

One thing at a time to diagnose the issue.

If you want a quiet cut, yes slow down.

If you dont mind the noise, and you want to up your production, It may be a good time to get a Shapeoko to help with the heavier cuts.