I’ve done a search on the forum for Z-Axis and found many related posts.with symptoms similar to mine. I see there is a post dated yesterday with the topic “Removing a Z-axis spring”. One person says remove a spring, another says the community doesn’t recommend it and still another says basically… no harm. Removing a spring hadn’t occurred to me.

I decided to add several columns of inserts to my secondary waste board to complement the T-tracks I’ve installed. I ran three columns of 8 holes with countersinks in the Y direction. During the fourth column I heard the loud click meaning the belt had skipped, then again on the next hole. That’s when I noticed the holes were progressively shallower by about an 1/8th. I canceled the job. Checked the adjustment screws in the Z Belt pulley and found that both were tight.

Moving the Gantry up and down revealed some binding in one spot about an inch below top. I removed the springs and slid the gantry down until the bottom wheels came free. I re-ingaged the wheels and the “bump” was gone. May have been some debris between the wheels and rails.

I checked the pulley tension. It seemed like it might have a little play in it so I adjusted it and ran the gcode again. Once more, after several drilled holes, the click returned. One click in each hole with each reducing the depth of the hole about an eight of an inch. I canceled the job again.

Tomorrow I will try the “remove a spring” routine and see if there is any difference.

In the mean time, if anyone can make any suggestions as to what else I can try, I’d be most appreciative.

The problem in this case is the XL and XXL are taller than the original SO3, so trying to work directly on, let alone below the wasteboard is beyond a reasonable distance of Z-axis travel. Adding the spoilboard and working on top of it is the correct solution.

Yep, what Will said.
I had the exact same problem, and ended up sticking the tool out further, ( too far really).
You can get longer bits from drillman on ebay.
When adjusting the v wheel tightness, I tighten it while I turn it with one finger, and as soon as it stops turning I stop tightening. That way I dont have to worry about them being too tight, better to be a little loose than tight, they can develop flat spots.
I believe the springs do pull too hard at that amount of stretch, so that would probably work too.

I ended up getting a 4" bit at first, not knowing what I was buying, but it was helpful for adding holes for threaded inserts in my SO3 wasteboard. I think I’m going to add another batch of them this weekend, either that or make a spoilboard I can bolt down to my MDF board and then flatten, haven’t decided.

I decided to add several columns of inserts to my secondary waste board to complement the T-tracks I’ve installed.

Maybe you missed the part of my post that said “secondary waste board”… I have installed a 3/4" MDF spoilboard atop the 3/4" wasteboard. (two mate toe / two mah toe).

I removed one of the springs this evening and finished the remaining 3 columns of insert holes without a problem. No clicks… smooth as silk. I’ve replaced the spring.

I do have another question maybe Will would know the answer to… with both springs on the plate, I manually lower the plate to the bottom of the rails. When I release the plate, it will rise maybe 3/8" and hold that position. I can then manually raise the plate to any position from there up to the top of the rails and it will hold position anywhere along. Is that normal or should the springs be pulling the plate upward at least part of the way? 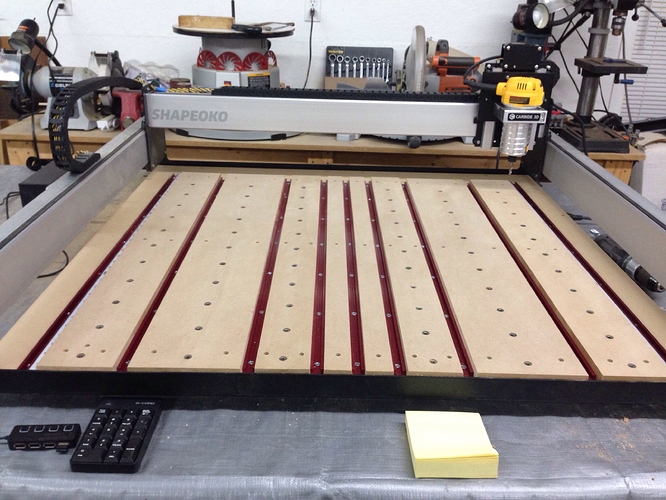 Thanks for your help.
Bill

What are the measurements on each section of your MDF between your t-tracks. I am about to undertake a similar modification and trying to determine the best t-track positions. Any problems with yours so far?

I give credit to @WillAdams for the design. He posted a picture of his layout and I basically copied his and used my own numbers for the width of the slats. Below is a section from an earlier post I made. http://community.carbide3d.com/t/waste-board-finished-at-last/4420

With a special thanks to @WillAdams’ post showing his layout plan, I set to putting mine in order. I believe he used a PVC material. I opted to cut 1-1/2, 3, 4 & 6" slats of 3/4" MDF. I don’t know the exact dimensions of Williams, but mine must be fairly close.

The MDF slats and T-tracs are screwed directly to the original waste board.

It appears your T-track is set back enough to allow the T-nut to slide right into your track. I’m still contemplating how to mount my T-track and the notion of cutting rail slots/pockets in the stock wasteboard for the T-track was my initial notion. Doing this would also require a small pocket area between the track and front frame of my machine so I could insert the T-nuts.

It looks as if you flush mounted your T-track and additional wasteboard right to the stock wasteboard, correct? 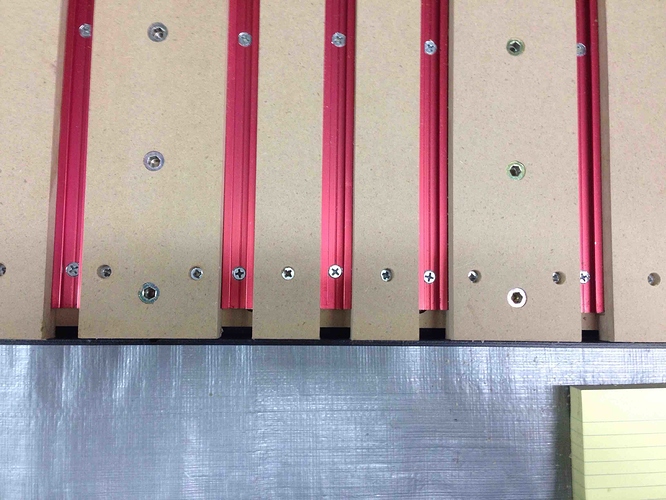 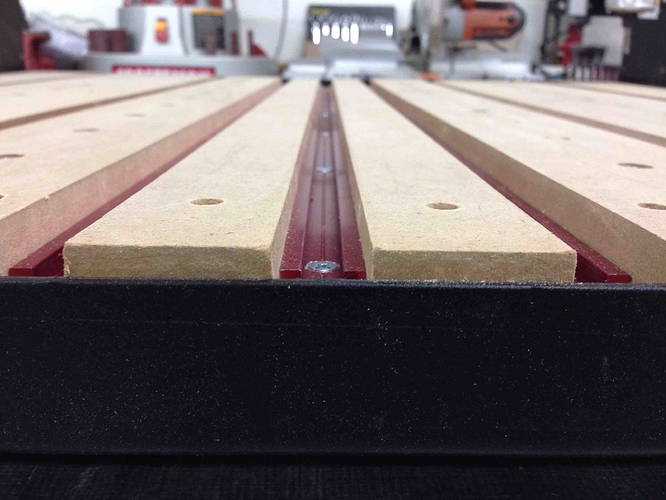 One other thing… I bought six 3" carriage bolts for my hold downs and ground two sides of the head to form the “T” and just a tad off the top and they make perfect T-screws. 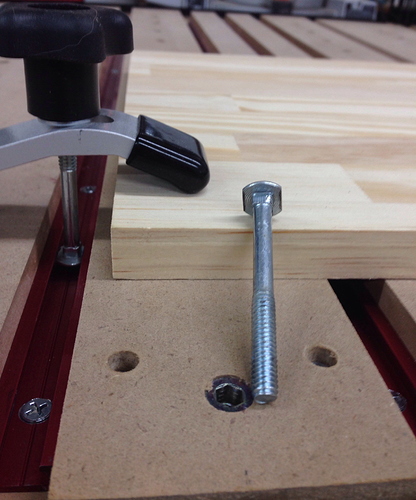 Ha. I do the same thing with carriage bolts. Quick and easy.
I have a whole clamp set with them at different lengths.
That’s an awesome waste board set up too.

I had the same Z-Axis problem… As others have done, I added a spoil board (faced it to ensure it was flat to the stock waste board) and re-adjusted my v-wheels to ensure they weren’t to tight. Problem gone! Also, always keep the Z-Axis extrusions and v-wheels as clean as possible.