No not that UPS. I’m wondering if anyone has run their Shapeoko thru an Uninterrupted Power Supply? We get short duration power hits, usually less than a second or two. If I ran my setup through, say a 1500va, 900 watt model, if that would keep everything up for a couple seconds?

I’m working on a 5 hour carve right now and I started thing about it. I’d hate if it dumped in the middle.

Yes, folks have done this — there are electrical implications (I believe the search term to use is “sine wave”) which can result in a dramatic shortening of the lifespan of the unit/batteries.

A good quality UPS will do well. A pure sine wave 1500va 900w model would probably run the machine, the router and a computer for more than 20 minutes easily.

Here’s my post with a video of when I yanked the power cord with my SO3 and router running while hooked up to an UPS.

And here’s a good discussion on a UPS. I might note that I recently had a double power outage of about 15 seconds each during a thunderstorm. I was 90% done with a large 3D cut, but nothing happened except it got too dark to see what was going on. I was halfway to the flashlight when the power came back on. Also, we have almost daily “blips” of power where the UPS will only have time to beep once.

There are always posts about problems with losing communication with the controller. Usually, the plan of action is to start shielding wires and grounding dust collection. That most likely is the main solution to the problem. However, my experience tells me to solve some larger problems (like static, etc.) by doing one basic thing from the start … regulate power to the system. I’ve done that in most of my career by never installing electronic gear without also installing an Uninterruptible Pow…

Thanks to everyone for your input. Thanks MadHatter for the video, it was very informative. We don’t have these “blips” very often, usually when we have high wind or a storm blow up on us. But we’re out in the country and you can never see 'em coming.

Just a stupid, probably obvious observation - but in my mind I was thinking about taking advantage of the 6-8 outlets on the back of the APC to go to the router, computer, and Shapeoko…and then I realized that that would put the APC on the wrong end of my kill switch! Could you imagine hitting the kill switch and the APC just keeps everything moving>???

That’s quite a problem in large data center buildings and other sites with MW scale UPS systems (container ports etc.). In those cases there’s a ‘firemans switch’ that kills the UPS, apparently that’s a good idea before spraying water into the building…

Unfortunately for us the little desktop units don’t tend to have the control terminals for that.

The thing to look out for is running an AC motor (like your router) off a battery backup. AC motors shift the current and voltage out of phase with each other which does whacky things to the power draw. Many UPSs do not like this and will complain. Make sure you have a good quality UPS and that it is rated for a considerably higher VA than you think you need.

Just wondering if there’s a consumer level UPS that can output both 120 and 240 volts. I am running a 240v spindle so, obviously a 120v only model wouldn’t do much good for that.

None that I am aware of. I know there are enterprise grade ones that offer 3 phase support. Not quite the same thing though

APC does make a 220v UPS, but it’s not dual voltage. I am considering getting one since I am in the same situation as you. 120v for the computer and SO3 controller,220v for the spindle.

I just procured a CyberPower CP1500PFCLCD PFC Sinewave UPS System, 1500VA/1000W, 12 Outlets, AVR, Mini Tower, Black from Amazon. Put it inline between the wall recep and the Kill Switch and power strip downstream of the switch. I decided to just plug in the router and Shapeoko for the load on the UPS. The vac and lights are fed from a separate power source. I consider them non essential in a short duration power hit or outage.

Once everything was in place I started a test job on the Shapeoko and pulled the UPS power cord from the wall…The Shapeoko and the router held and continued on their way, no ill effects observed. I’m satisfied with the results and feel confident that this combination will work.

Don’t forget that your PC/laptop/RPi that is running Carbide Motion will also need power backup otherwise your Shapeoko will get disconnected. I suppose if it is a laptop the battery will take care of this.

I run a Microsoft Surface Pro 3, which is battery op. It should be good for an hour maybe.

I built a simple tray out of 3/4 plywood for the UPS to sit in, with sides for tip support when moving the enclosure. A bit oversize to allow air flow. Here it is mounted to the leg cross brace, ready for action. 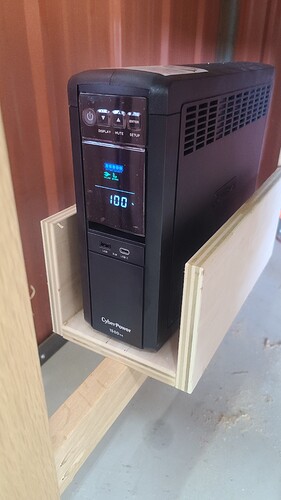 Just wondering if there’s a consumer level UPS that can output both 120 and 240 volts.

I wonder, is there a legitimate use-case for this aside from people who buy foreign equipment? Do Americans sometimes need 240V for domestic stuff or Europeans 120V?

A lot (most) of the water cooled spindles available are 240v AC. Sure, with some digging one can find a 120v but since I have a sub panel with 240v in my shop, it was no big deal for me to run a 240v / 20 amp outlet. A lot of bigger shop equipment can be wired for 120v or 240v, with the better option being 240v if you can due to lower current draw (which translates to smaller gauge wire).

It would be relatively easy to manufacture a UPS with both voltages available on the output, but that would depend on the market demand which is probably limited.

Given how easy it is to make a switched mode power supply for wide range input voltage to cover 100V to 240V + I’d suggest it would be a better plan to just get an EU spec PSU for the Shapeoko and your laptop / desktop computer and run everything off 240V like we do over here (well 230V but near enough).