Hello all… I just ordered my SO3 2 days ago and while I am waiting for it to arrive I am looking at some of my previous designs and trying to replicate them in CC and/or Meshcam. I have an inkling that ultimately, my needs might be better served by learning either Vectric / Fusion 360.

I am going to start slow and just post an image of a recently completed project and ask for opinions on what would get me up and running QUICKEST and EASIEST ( easiest doesn’t have to include learning the software - it should be taken to mean I want to get my designs done and on the machine in the fewest number of steps ).

SO here is the image of a recently finished cabinet: 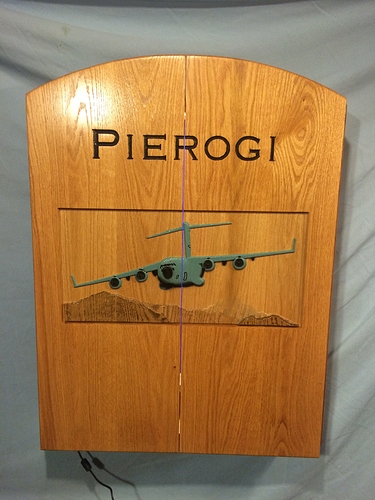 If you look at the image you will see I have text Vcarved along the top, split right across the center of my doors and under that is a relief carving, also split across my set of doors. This project was completed on my Carvewright and used their proprietary software. Two files were created, one for each door but the project design was developed as a single file. Basically, I copied all the elements, pasted them onto the left/right door in the file and just let the design elements “hang off” the board. I can get much more specific on how I accomplished this but then I’ll post a wall of text and I wanted to avoid that for my first posts

First question I have would be - are Carbide Create / MeshCAM suitable to EASILY break up projects across multiple boards?

MeshCAM should be able to break up things pretty easily, but I’m still not that familiar with it, so will defer to others.

Or maybe create a single file (covering both doors) in CC, then… The first thing that occurs to me then would be to open that in MC, then just set an exclude region covering half the project, then repeat with the other half. Unless I’m missing something…

What can one export from Carbide Create which MeshCAM will open? The only way to begin to do that which I know of is an unofficial converter from the unofficial Shapeoko Facebook group which will convert a .c2d into a .svg (but it doesn’t handle curves yet).

If the airplane is in 3 dimensions, not a simple 2/2.5D cut then Carbide Create won’t do it.

Meshcam will do the 3D, but there’s no “layout” per se’. If I was to use this I would use Carbide Create to hog out most of it (make an outline of the 3D area and pocket all around) and do the lettering, then use Meshcam to do the 3D, but that gets more complicated.

I have no experience with Fusion, can’t comment other than many people like it and it’s free for hobbyists.

I use Vectric VCarve Desktop for almost everything since I bought it and this would be my go to and simplest. Lay it all out as one file, save as two (name on left, one right). Resize your material to half, trim and close paths. Open opposite side file, shift all vectors over by one material width, trim, close. There’s a little more to it than that, but that’s the basics. I’ve used a ton of graphics/vector/CAD software over the years and I found the learning curve of the Vectric products to be EXTREMELY simple, but then I also spend 2 weeks a year in school for work “refreshing” my skills in Catia V5 (which I’ve been using for years, but I will never master). It’s honestly the easiest software I’ve ever learned and very capable, even the “Desktop” version that I use is great, only real limit for me is work pieces under 2 feet square.

In the end there’s a 100 ways to skin a cat, but these are my thoughts on the strategy I use.

Dang! Yeah–see what happens when you comment about something you don’t regularly use. MeshCAM, yeah–CC, not so much. Sorry 'bout that.