So, I’ve been using Advanced Vcarve for a bit to create some stuff, and I’ve noticed it wastes a TON of time doing microscopic tiny plunges where it barely takes any material away. Is there any way to reduce this? I’d estimate it accounts for 1/3 of the total machine time.

Overall I find the tool paths created in Advanced Vcarve to be quite inefficient.

As I watched mine working, it seems to be doing the fine detail lets say the finishing touches of the the shape. That few thousands it pecks can break a project. As I got comfortable and learned my machine I was able to increase the feed to alleviate the time it takes.

If you can accept rounded ends and an even depth all around you can inset and use a no offset contour toolpath w/ a V endmill.

No, I totally get why they have those tiny, almost imperceptible pecks on tight detail, especially to ensure clean little calligraphic flourishes. I’m talking about one of two things:

First, plunging pecks all over the workpiece early in the job where they are removing a small amount, and in an area that gets further cleaned out later. I’m not entirely sure these aren’t being done as some type of pre-clearing so when the bit comes through later it doesn’t tear out. But that’s just me assuming the best of the algorithm.

Second, when the job is running, the bit will repeatedly plunge in mostly open areas, touching nothing and removing no material.

If you have a particularly egregious file, send it to us to check out. This is the kind of thing we want to optimize if it’s a general problem (and not a problematic design).

If you zoom in on your toolpath, you may see a bunch of little moves like this… 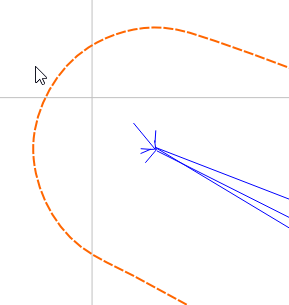 Any place the tool can contact the vector in 2 places (bi-tangency) with any uncut material between those 2 points, it will make an angled move to clear out that material. It’s pretty obvious in sharp corners where it picks out the corner to use the pointed end of the tool to sharpen that corner.
But in some cases, it’s only picking out a small amount until the diameter of the tool is small enough to get the detail you asked it to cut.

Also notice the square nodes vs the circle nodes. Circles are “smooth”, where squares are sharp corners, even if the corner is 179.999°, or the tangency changes by 0.001°, it’s still mathematically a sharp corner, and V-Carve will pick it out.