Is there a way to do this in CC?

So, I want to have a small board with a bowl like indent in the middle (preferably smooth) but I really can’t use Meshcam for reasons I won’t go into here. Is this something Carbide Create can do and if so can someone point me in the right direction to figure out how?

(on Mac so V-Carve is not a viable option)

You could approximate it with a series of pockets, but it would leave a series of steps — if you’re patient enough this could reasonably approximate the desired shape — there is a programmatic tool for creating such files: Cutter Pack Giveaway!

You would need to model this in 3D, or use a tool which would create such a 3D profile as a toolpath.

I am running VCarve on my Mac and it works very well, I use parallel to run Windows10 as a virtual machine.

Another option would be a depth map using a pixel image — list of them on the wiki, or MeshCAM can do that sort of thing.

I already have software to create the 3D model (STL) I just needed a way to create the tool path. I think I am going to try and learn Fusion 360 even though I find it harder to learn new software these days. Use to be I would pick up a new program and a book and over a weekend I would be pretty proficient with it but now I’m getting older it can take months to learn the same thing and I have less free time these days.

You should be able to import the STL into Autodesk and then do CAM.

@luc.onthego You can create the indent/bowl shape in VCarve by using the clipart Dome/dishes. Just FYI…

I understand that you can create them, use 3D clipart but you cannot design them in VCarve Pro so unless it is an already made shape you cannot produce it.

The paradigm has shifted to:

I believe you can in VCarve, but it’s not super simple. I think you can use the form tool with a custom tool then write two toolpaths on two different drive rails(half circle each). When I’ve tried it I end up with a little pillar in the middle that can be removed with a pocket. Again it’s not super simple, but it could/can be done with a little research/work. I’ve yet to actually cut a dish like this, but I think I saw something on the Vectric forum where someone made a heart shaped pocket the same way.

So I got to fiddling with this in Vcarve, I know you mentioned VCarve not being an option, but I wanted to see how easily it could be done for my own knowledge. 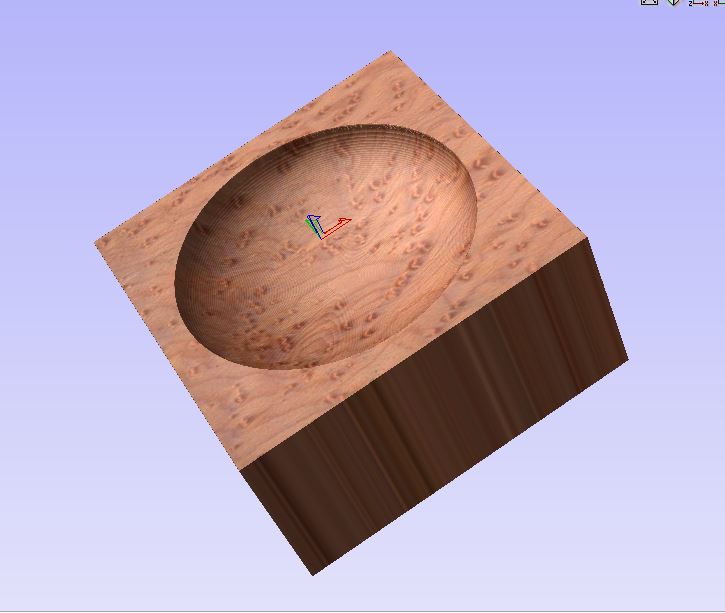 Turns out it’s not hard at all. If you would like I would be willing to create the gcode for just the bowl you’re needing. I just need the diameter, depth, and feed/plunge speed. I’ll create a gcode file with the x/y/z zero at the center and top of stock. Note that if you want a really deep bowl you’ll need a really long endmill to avoid crashing. In the picture I posted that is a 1" deep 5" diameter bowl set up to cut with a 1/4" ball end mill.

From scratch. If you have VCarve I’ll attach my file to this post and you can see it for yourself, you’ll have to unzip it (I don’t think the forum handles the VCarve filetype). Let me know if you have any questions.

Actually, thinking about this now there’s probably an even easier way to do this than the file above, but doing it that way you could do other shapes than just a round dish. Away from my PC at the moment, but I’ll try to give it another go tomorrow.

Being relatively new to VCarve, I had yet to explore the molding toolpaths. What is interesting is that having only a 2D shape, you can produce this relatively complex 2.5D model. The work is done in the toolpaths. I want to explore this but I will not be able to for a few days.

Personally, I will be interested in creating other shapes that have ramps and hopefully that should be possible too.

So as to not totally hijack this thread from the original question of how to do this in Carbide Create I’ve created a different post in the unsupported forum:

Bowls and such in VCarve Unsupported

I didn’t want to totally hijack the original post here: So I’ve created a new forum post below: I’ve gotten a chance to return to this today and play around some more. Definitely found simpler ways to cut a bowl, and some other stuff: simple bowl [Capture1] Elongated oval bowl: [Capture2] Heart shapeed bowl much like the example on the Vecric site: [Capture3] And a 2 sided full bowl: [Capture4] Attached zip file with each example: bowl_carve_muti.zip (601.9 KB) They could all be…

So, I went ahead and put Windows on my Mac just to allow me to use other software and I am looking into Vcarve. I see they have a free trial version of each software and I am thinking of usine the Vcarve Home version (or will I be missing something important) and then I noticed something “Unlimited Trial, No limits to how long you can use the trial software” so what’s the catch? Are the trial version crippled in some way? Like won’t save or cut… Or maybe it places a watermark on each piece made?? Or do people just use it for free and pay if they decide to (unlikely)?

I use the Desktop version rather than Pro. The biggest limit is that projects can’t be larger than 24"x24" without tiling (there’s some other features that aren’t available, but I don’t know off the top of my head). I personally haven’t found that limit worth an extra $350 to me, but if I ever do the Vectric licensing is such that I can pay just the difference for the Pro upgrade. I always suggest people save their money and use Desktop till they find it limiting. I don’t really remember the limits of the trial, maybe it won’t write tool paths? You’re probably be better off checking Vectric’s website.

Have you tried this in Fusion? Modeling this would literally take 60 seconds, and generating the CAM another 5 minutes.