I’m sure there’s a better name for this, but my machine is suddenly not cutting quite the right shape, and I’m not sure what I need to change/clean/adjust to fix it. Sorry for the essay - I’m trying to include lots of details because I’m not really sure what’s relevant and what’s not.

I ran a pretty simple cut maybe a week ago, and it came out fine. Cut the same design (albeit different bits, different thickness plywood) twice yesterday and both had issues.

Adding the design file here. Basically an outer scalloped contour, a pocket between two concentric circles, and a third inner contour of the inner circle from the pocket.

The first one (that was fine) used a 1/8" downcut for the outer shape, and I think the same bit for the inner shapes too because I didn’t feel like changing bits. This was cut out of 1/4" plywood. My issue here was that I had some chips on the bottom surface (which will be the front when finished), so I thought I’d try again yesterday with a 1/8" upcut bit. The first one I had the issues I’ll describe below, but a bit come loose during one of the cuts and I noticed a bit of debris on one of the side rails, so I cleaned that off and tried again on a different part of the bed, but had similar issues.

The ones yesterday were out of 1/4" plywood. On the first one I did the inner pocket first, and the first thing I noticed was that the two paths (inside and outside circles of the pocket) were not the same distance apart around the circle. I didn’t measure these, but it was obvious that the bottom left and top right were wider than the bottom right and top left. On the second one yesterday, I measured the width of the pocket and it ranged from .35" to .44". It should be .375". 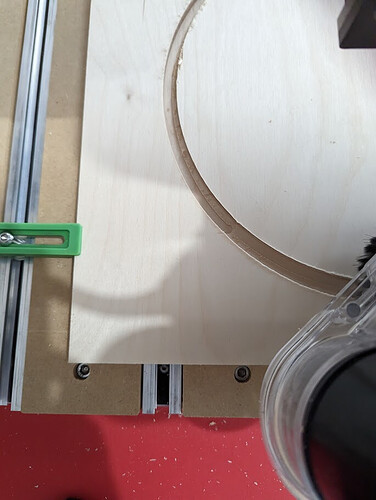 The first cut into each outer circle also had a bit of a bump. This may have happened on the one that looks fine from last week - I wasn’t paying enough attention. 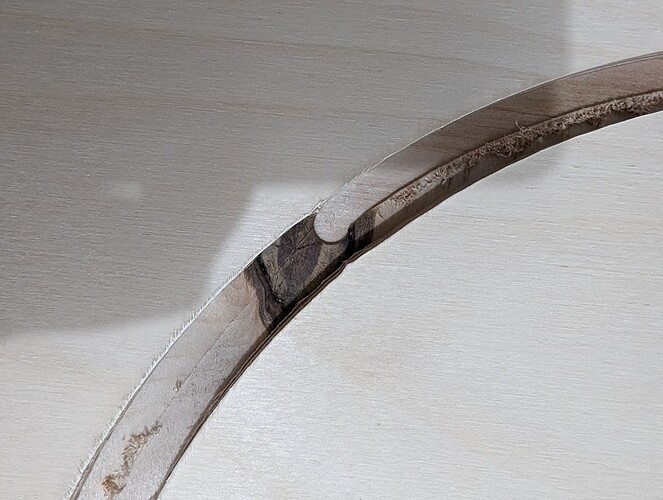 Next, when I cut the inner circle contour, it left a very thin wall on the top left and bottom right. This did happen a tiny bit in the one last week, but each wall was maybe 2" long and super thin. The ones this time were about 6" long and not quite as thin.

My biggest concern for this particular project is that some of the outer scallops are noticeably not round in either of the ones from yesterday. It’s hard to capture this in pictures, but it’s quite obvious in person. The lumpy ones are circled here, and they happened in the same place in both tests yesterday. The first one I used a 1/8" upcut bit, and the second I used a 1/4" upcut bit. 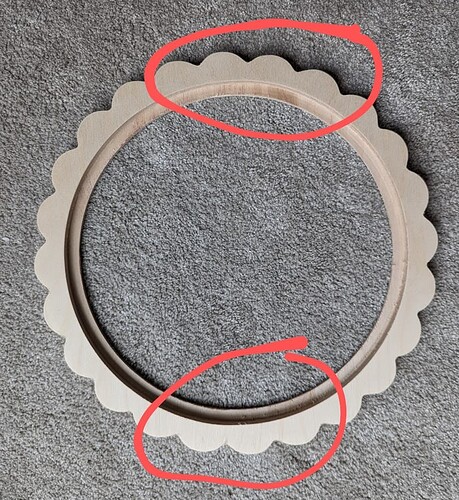 My understanding is that the machine should have enough precision to not have especially the first and third issues here, but I’m not sure what I need to do to fix them. I’m especially puzzled since it ran the same design file with no problems just a week or so ago.

First, it would be better to cut the outer contour after everything else, so move it down: 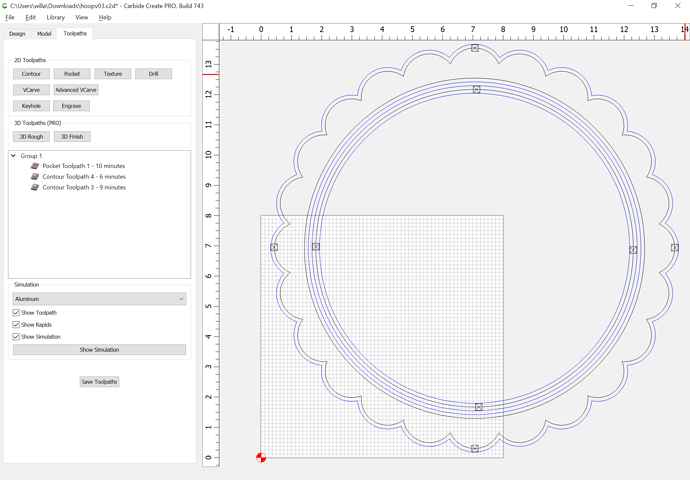 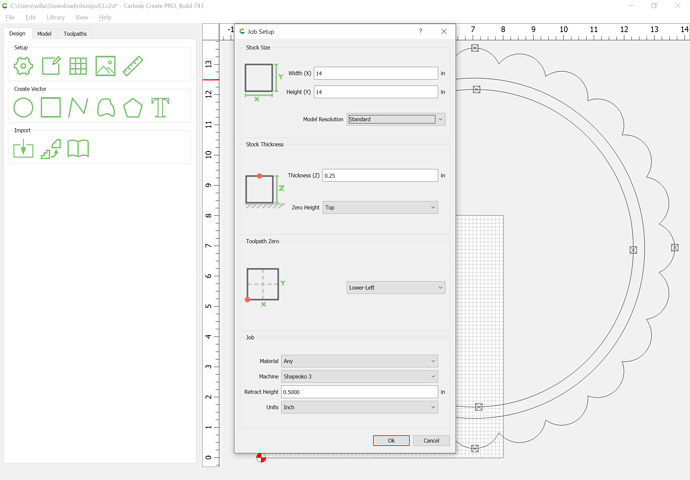 and limit toolpaths to be w/in the thickness of the stock: 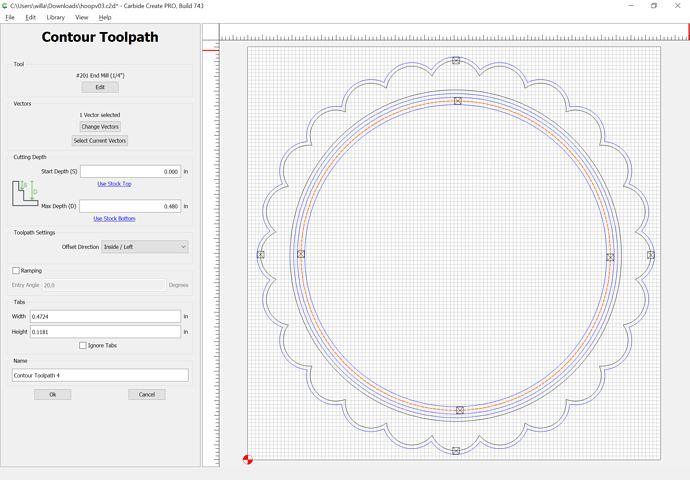 and I find it confusing to use an inside / left cut here — instead, reduce the size of the circle and cut along the outside — this will allow using the bottom of the preceding pocket to be used as the start point, and add geometry and cut as a pocket down to tab height. 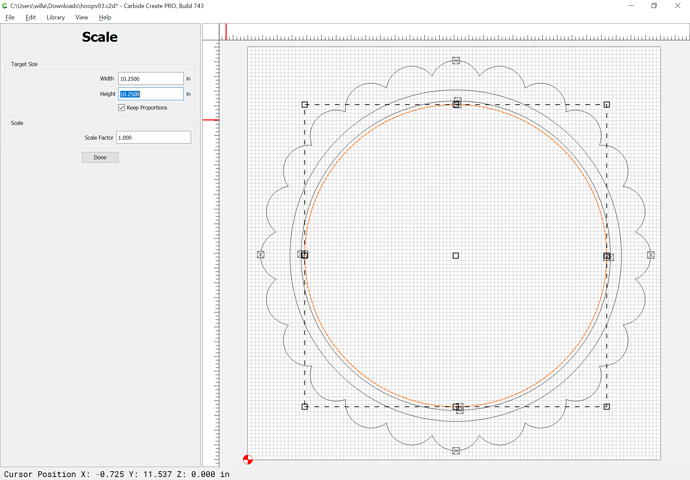 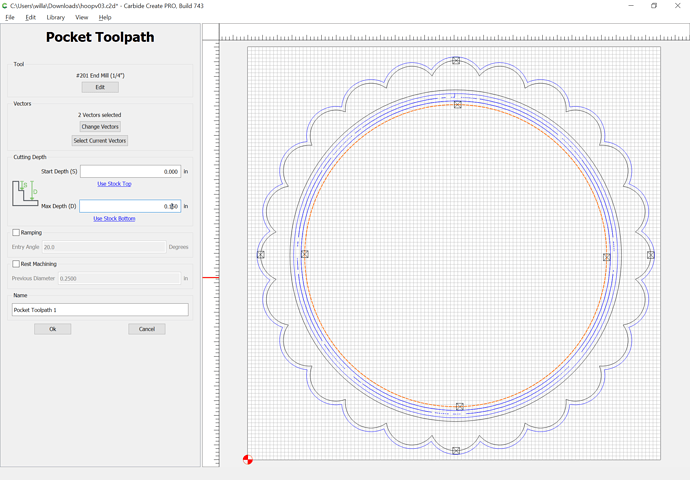 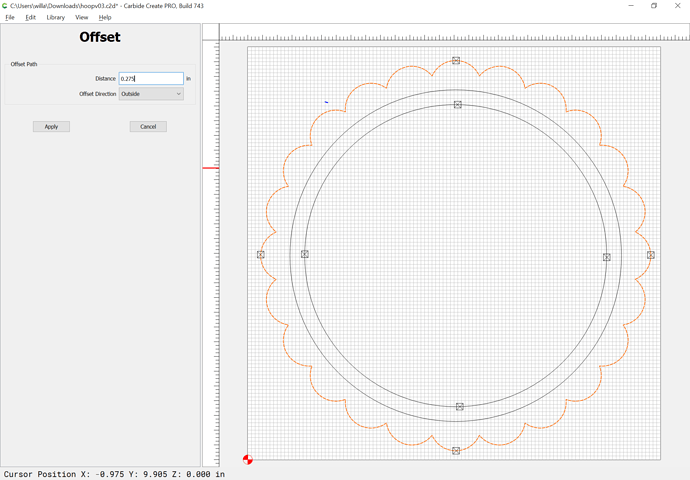 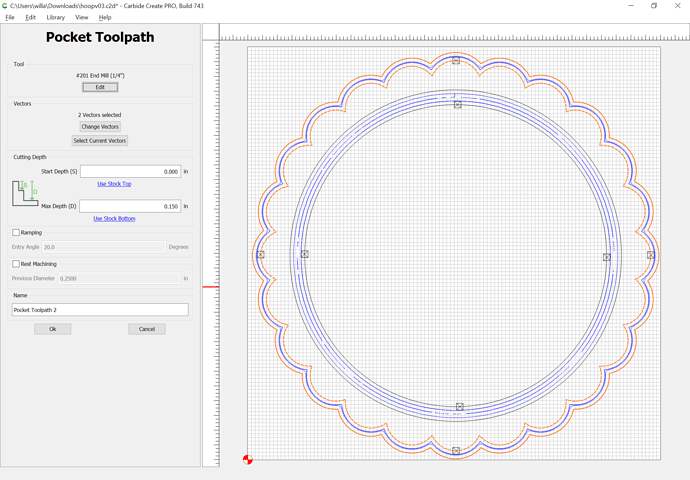 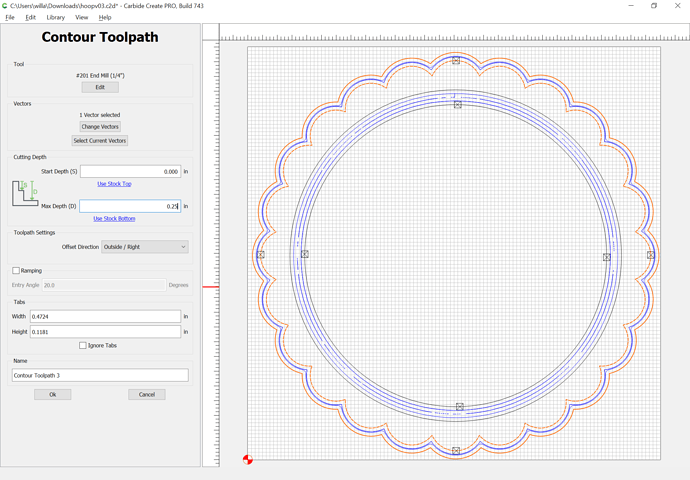 In addition to the best practice Will mentioned, if this kind of cut used to work fine and all of a sudden didn’t work anymore, you should check for slop somewhere in the axes. Since you are on a Pro, it can’t really be the X or Y axes, so I would recommend checking the Z axis and the router itself: with the machine turned on (axes locked), router off/unplugged, if you (carefully) grab the shaft of the endmill and try to wiggle it around, do you feel any slop ?