I am posting here with a link to a similar issue on Facebook.

If you're new to the Carbide 3D Shapeoko family, you just found your new home. Got questions, comments, concerns? Voice them here. This group is not sponsored or endorsed by Carbide 3D, but that...

I have had the same issue with the irregular shapes causing pocketing to be of uneven depth. Full disclosure, I am running CC Pro and using a Sienci LM2, not a Shapeoko. However, Pro should get me some support, I hope.

This is not caused by Z slippage, and occurs with a single bit (no change). Pockets with regular shapes (round, rectangle) do not seem to have the problem, but any major irregularity in shape (i.e. pocket around a multi-layer text sign) seems to show the problem. Hopefully there is an easy fix for this, or at least it is a known problem.

I am attaching a sample that exhibits this issue. Note - the Vcarve paths were split with GcodeSplit - Split gcode files by toolpath to provide the tool paths for the LM2 without bit changes.
wedding sign test.c2d (2 MB)

Additional thoughts. This occurs with oak, pecan, mesquite - well seasoned wood, very flat and no tram problems. Even if I do a simple pocket (no vcarve/split) this happens. It is especially notable with larger bit sizes (1/4 inch). But it always occurs in the areas that are irregular shapes in the clearance. 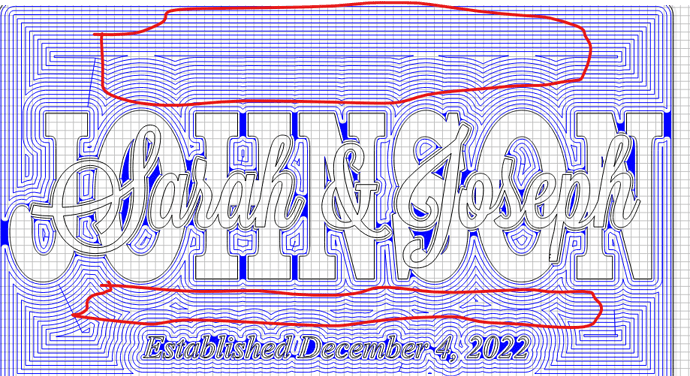 Can you post an example picture of “uneven depth” ? Since the gcode only tells the machine to run at constant Z depth during a pocket op, if it really is a depth problem then either there is endmill slippage (but you seem confident there isn’t, and it would not just happen in those areas), or the Z axis is losing steps (again not likely based on your description). I wonder if what you see is rather leftover material in between horizontal passes in those areas, due to the stepover you used on complex shape pockets?
You are using a 50% stepover on a 1/8" endmill, so the toolpath math is such that in those areas you highlighted, CC generates a path that is supposed to remove all material but there is zero overlay (horizontally). If during the cut there is any tool deflection, you may end up with thin walls of uncut material. To prove this theory, you can regenerate the pocket toolpath with a different stepover (say 45%) an rerun that: chances are it will clean-up the residual material, just because the alignment of passes changes slightly. Clear as mud ?

One thing which helps w/ uneven depth is to adjust the depth per pass so that the ultimate pass makes a very shallow cut, e.g., if cutting to a depth of 0.5" w/ a depth per pass of 0.125" (4 full depth passes), reduce the depth per pass to 0.124" — this will result in a fifth pass which only removes 0.004" of material, essentially a finishing pass.

Attached photo is from an earlier 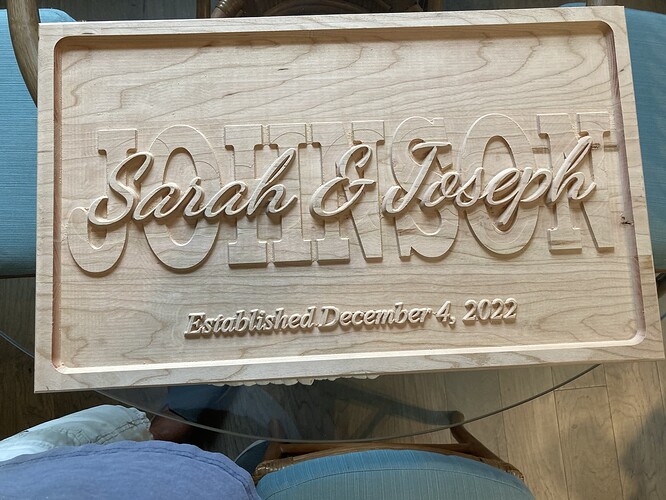 The file I uploaded pretty much has that built in. Total cut .125 with DOC at .03 leaves a .02 finish pass (admittedly bigger than your .004). I will be running tests, and I thank you for the suggestion.

The other thing to do is to inset the geometry and then run a full-depth finishing pass at a different step-over — using one w/ a radiused corner can help w/ this sort of thing.

Morris,
The sign you have pictured, how thick is it? When sitting on the glass table, is it cupped or twisted?

The sign pictured was 20mm thick. Surfaced on both sides after glue up from 24mm cherry (approximately 2mm came off each surface). No twist at all.

So with stock of 20mm and each step created being say 5mm for a total of 10mm, half or a little more was removed. With an up cut bit (not sure what you were using) trying to pull material into it, I wonder if the remaining 10mm floor was not strong enough to over come the forces of the cutter. Your problem seems to occur at the weakest area leading me to this thought.

Nothing a little bit of Sanding won’t solve.
My gut is telling me that the piece is moving.

I have had issues when the EM pushes down the material just a hair in one part of the job but not the other.

IE this piece of wood could have a bow in it the center which is pushing it up. While the work holding is done on the outside perimeter. That little push from the endmill could cause something like this.

I have a similar problem, There are islands missing in the pocket cut where the two sides of the pocket should overlap when they come together, I had to change the stepover a bit to minimize it. The issue is when I changed it, another area would open up. I just adjusted it for the best stepover by looking at the simulation. IMHO the math is a bit out as the overlap down the middle of these pockets can create islands. It is like the center line is missing as it ends up needing a single odd number pass to take out the middle.

Again IMHO it would be nice if either the stepover was a maximin and the math would adjust the stepover to fit or it finished the pocket with a single pass.

One of mine was a pocket circle ring and it left a ridge right down the middle all the way around. Again I just adjusted the stepover so the math worked out better