Is this the rightright section? Apologies if it isn’t.

We finally have a CNC!

A little context as to who “we” are: I’m Sam. Still in school, doing bits of work when I can for “The boss”. We make housings for film and video cameras, and the framework for these housings is aluminium. Years and years ago (Before I could walk!), the boss used to make all the parts by hand on a manual mill, but that took ages. We then moved to getting them sub-conned. About this time last year, I suddenly became a lot more interested in work stuff, and started looking into CNC machines. I even spent a few months designing our own for ~£1000. Everything went a bit quiet until I saw @Vince.Fab’s video on the Shapeoko on the NYCCNC channel…

A machine, cutters and material wasn’t much more than a batch of parts from our current suppliers so, we got one!

Monday this week, it arrived and I assembled it. 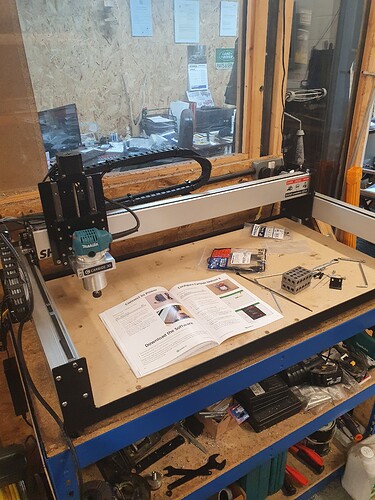 Tuesday, I started doing a few tests in scrap, and tried a small part: 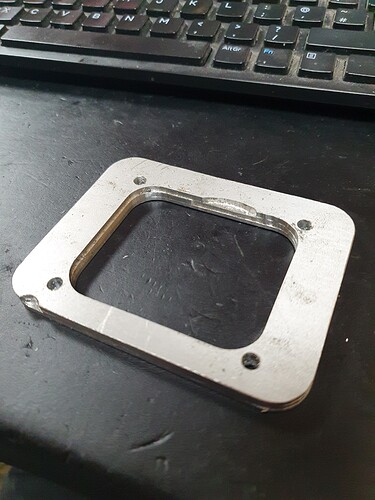 Wednesday, I updated the speeds and feeds and made another. 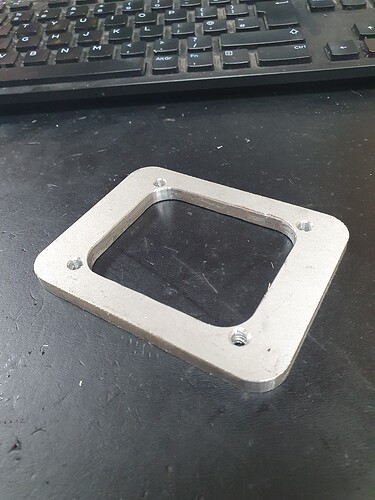 Thursday, I designed and started machining one of our larger parts: 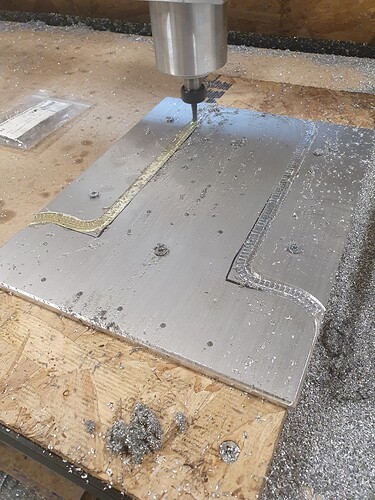 Until it stopped. About 20 minutes left on a hour and a half total cycle. Queue 4-5 hours of troubleshooting.

“Cutter disconnected” was all I got from Carbide Motion, I managed to connect again, but it disconnected within 10 seconds.

I tried a new USB port, no different.

I tried 3 new cables! No different.

I tried restarting the router and computer, no different.

At that point, I ran out of time. A few emails to Carbide3D through the evening, I believe it’s the same @WillAdams on here that I spoke to earlier. He suggested another computer.

Earlier today, I tried said other computer… and… Phew, all works fine.

I finished the part, and it looks like so: 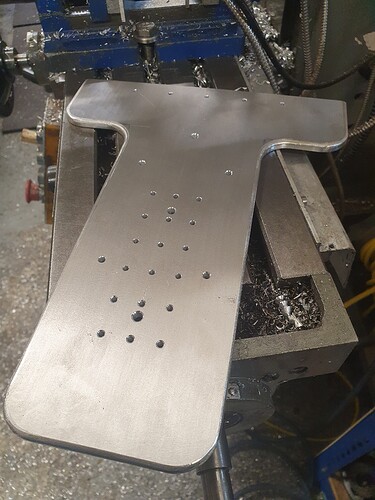 Being my first adventure into the land of CNC and robots, I thought it would be worthwhile joining a group of like-minded people.

Welcome to the Shapeoko family!

It’s great to hear about your early steps with the machine, and I must say I’m impressed how fast you got the hang of this. Are you @Vince.Fab second cousin or something?

I would usually insert a link to the shapeoko ebook here but it looks like you’re past that stage.

Nice to have another Brit onboard. Everybody around here is very accommodating and happy to help you, or be helped by you. Just don’t be too excellent

Nice work @Dalts2904 looks like you’re straight into it!

lots of people here to help if you get tied up with anything, and the Carbide3d team are awesome too.

What are you using for CAD/CAM?

Tapping holes by hand is fine, but if you really want to up your game you should check out Thread Milling, the shapeoko isn’t rigid enough to use a normal spiral tap but a lot of people threadmill with a cutter like this

Looks like you’re crushing it - keep sharing your work here if you can!

What are you using for CAD/CAM?

Like many on here, Fusion. Because we use it for work we have to pay for the full licence, but that’s still cheaper than a supplier.

Thread milling… I’ve heard of it, but never expected to be able to do it on the shapeoko. We purchased a tapping head especially for this, buy forgot to get taps. I tried using a normal hand tap, but as expected it clogged up and snapped. I managed to get it out and continue by hand with no more issues, but some spiral flute taps are on the order list.

Speaking of the part: 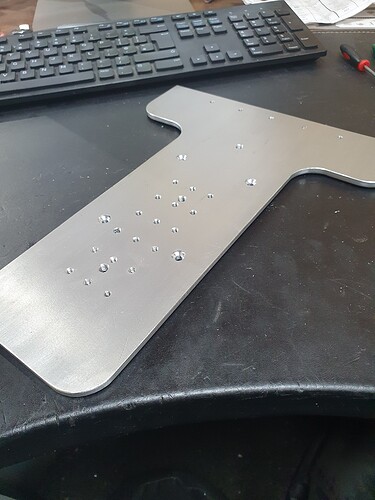 There are a few more parts that need making for a housing we have waiting, but we’re all out of material. The plate will probably arrive late next week.

Fusion is a solid choice for this stuff, it gives you plenty of flexibility and has great CAM
Check that video I linked or youtube for some good tutorials on threadmilling, I wouldn’t say its faster than hand tapping when done on the shapeoko, but the machine can be tapping 20x holes while you’re doing something else…

Otherwise check out ‘Spiral Flute’ taps, I’ve had better luck with them than standard taps 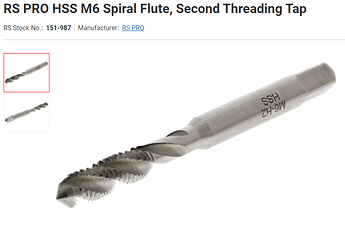 Hi Sam, Nice to meet you. Welcome. You have made a great choice of machine there. Nice work too. Its a great place to be.

I know the ones you mean, but from RS?! Did you win the lottery?!

Although, upon checking the prices they could be much worse - I’m shocked!

Did you win the lottery

Haha to be honest I just googled spiral flute tap and snipped the first picture.

Looking forwrd to seeing more of your work, are you machining chamfers on any of your parts? That steps up the finish to the next level

Looking forwrd to seeing more of your work, are you machining chamfers on any of your parts? That steps up the finish to the next level

Probably not. It’s not likely to worth be the extra tool change or another set up for the two sided parts.

In the time taken to take out the old tool, put in a chamfer mill, re-set the zero (No bitsetter) and run another toolpath, one of us could have gone over all the holes with a countersink in the drill and started running a file over the edges.

There should be some slightly more different-er parts coming up: blind holes, o-ring grooves, engraving, etc.

I also need to figure out a way of serialising them. Ideas so far include: 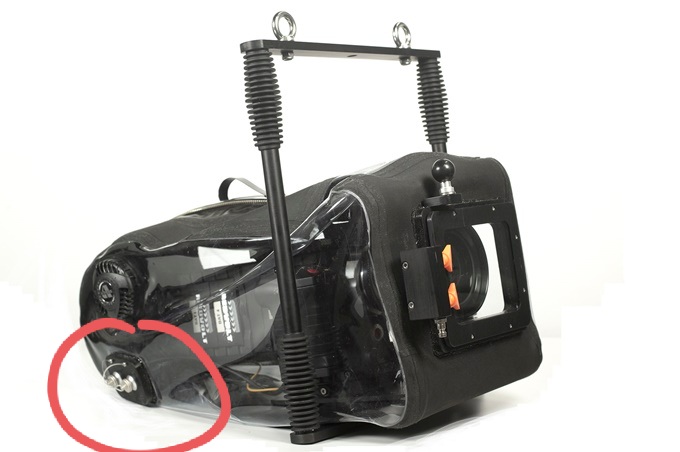 You can see on this unit, there’s 2 connectors. But on that size plate there can commonly be 3 and sometimes 4 connectors. Making blanks with the next few serial numbers meant we can add as many holes as we need.

If you were wondering, unde the red line is where that base plate goes, inside the bag of course. 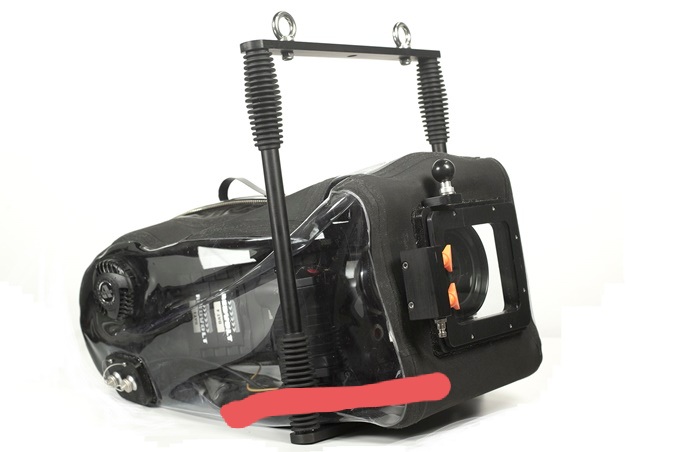