Today I was milling a piece of metalwork for my pillar drill. The drill had lost its plastic depth stop which was broken within weeks of its arrival. This is a simple enough design created in Affinity Designer. I had opted to keep control over the machining process by enabling each of the four toolpath stages separately from each other and I saved each toolpath as a different .nc file. I figured if anything went wrong, I would find it easier to recover from a process with clear break points.

While cutting the division which I am going to drill for a bolt to provide a clamping force around the quill, the 1/8" bit snapped and ruined my 1/8" collet. Investigating the issue, I found that it was taking a rather too healthy 1.5mm DOC at 50% stepover with a feed rate of 1500mm, a plunge rate of 750 and 18,000 RPM spindle speed. It bravely cut about 3mm deep before giving up the ghost. I had forgotten when creating the toolpath that the feeds and speeds for the slot had needed an adjustment to make the process easier.

Picture of the damaged 1/8" collet. This was after my initial attempts to revive it because it looked so much worse. It had to be persuaded to release the broken piece of endmill with a soft drift and an x-ray machine. It should be obvious why I concluded that using it would not be safe. 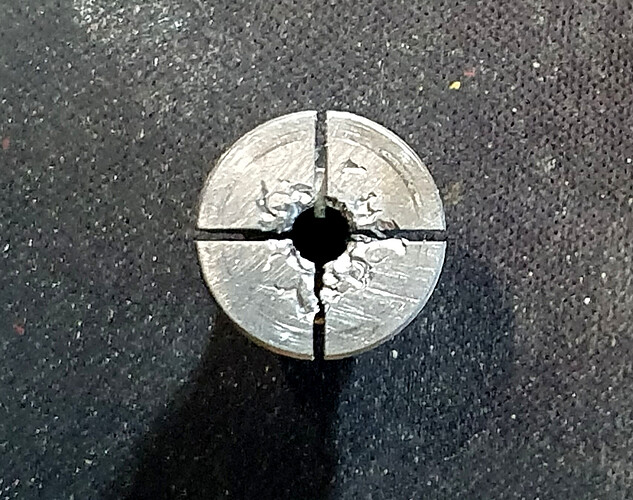 For some reason or another, I had not checked the dimensions of my pattern to cut and missed the mark by a good country mile.

This 6mm thick piece of aluminium stock was easy to cut using all of the stock feeds and speeds in the tool library for aluminium. I found that doubling the feed rate was helpful and the cutters sounded happier.

This image depicts the tabs used. I applied 6 x 1mm thick by 3mm wide tabs. They held the piece in place well and they were easy to cut with a small Dremel metal cutting blade at around 15,000 RPM.

It may not be obvious from this image but the small 8.7mm hole at the top of the last picture is likely to break out of the stock when tapped using taper, second and plug taps.

I liked the 5mm wall thickness because it permitted good flexibility when applying a clamping pressure. The quill was a nominal 40mm in diameter and my first idiotic move was not realising that the chuck would need removing. I knew the chuck was a B16 size taper and used a wooden hardwood drift (maple) and a wooden mallet to remove the chuck with one well placed hit. I also remembered to have a soft landing for the chuck to prevent damage to it.

I thought that the nominal 40mm quill diameter would benefit if the part was milled to 40.1mm so that the 4mm clamping gap would close up the loose fit. I was wrong because the actual nominal quill size (while it may have been specified as 40mm) was much nearer to 39.5mm. This meant my loose fit was very loose and my clamp gap was not wide enough to permit a pinch bolt action at my currently milled size. I was happy with the flexibility of the part under clamping load but that was the only bright spot.

With everything remeasured and checked again, I had drawn the design again and will probably machine it tomorrow. more anon…

Unfortunately most drill presses have plastic parts on the stop. Tha makes them unreliable for depth stops. My Steel City has a steel screw with a metal stop and it is bullet proof. If you ever replace it look for this setup. 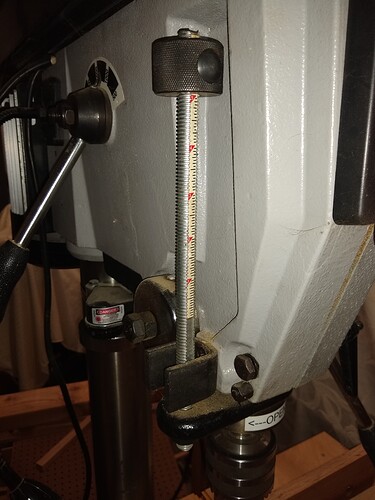 Unfortunately most drill presses have plastic parts on the stop. Tha makes them unreliable for depth stops. My Steel City has a steel screw with a metal stop and it is bullet proof. If you ever replace it look for this setup.

That’s a vast improvement on my own set up, Guy. I could almost use that set up as a drill press.

My own drill press was the very cheapest available bench drill press (cost and limited space prevailed) and it was seriously badly assembled. I accept that the low cost and being sight unseen contributed to that. The pillar was not square to the base and I spent a couple of hours fixing that. This guaranteed that any drilled vertical holes were actually vertical.

Five belt driven speeds from 900 ~ 2,300 so it is quiet when running its 1/4 hp motor. It has about a 2 inch travel on the sprung return quill. B16 taper and chuck to 1/2" capacity. Its only function is to drill vertical holes and it does that well enough for my purposes. If I need accurate, then I use the CNC machine and create orbital toolpaths. The depth stop was all kinds of useless and broke pretty quickly.

Before it broke, I was making plans to replace it but as the drill press was new to me, I was considering how best to effect the change. Events overtook me and now I am replacing the depth stop as my CNC skills have improved and my ability to machine metal has taken a leap with the addition of my fixture tooling plate and modular vices.

Here is the follow up to this drawn out part creation story. It is now complete and functional. The link is to a short video clip showing the part being cut for removal.

The material was 6mm thick T6 6061 T651 aluminium. The main endmill used was a single flute 1/4" carbide endmill from SpeTool. It has performed very well and the video clip shows it cutting a 0.5mm DOC at 1500mm per minute. The job utilised a 750mm per minute plunge rate. Chip size was good with very little heat generated.

The clamping slot was cut with a SpeTool 1/8" single flute endmill at 500mm per minute feed rate. The plunge rate of 250mm per minute was fine for this small endmill. The DOC was 0.2mm. Spindle speed was 12,000 in both cases.

It is worth mentioning that the comfort afforded by the fixture tooling plate and the modular vices cannot be overstated. I do not think that my original configuration SO3 would have coped easily with cutting aluminium. 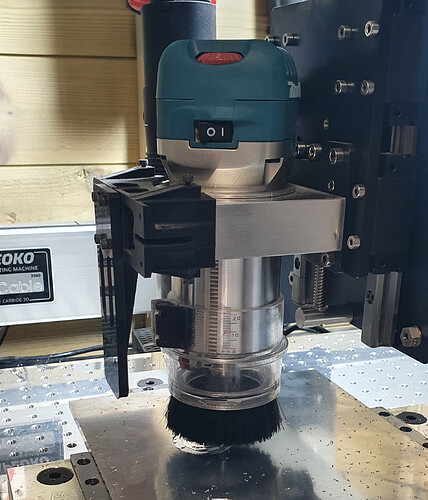 Cutting the part from the stock using tabs. 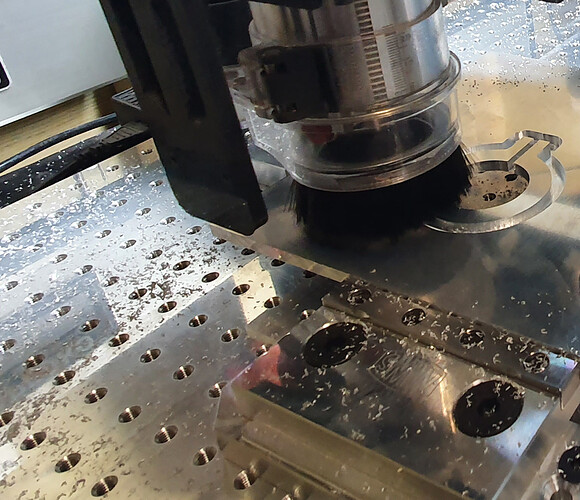 Ready to remove part. Tabs are 1mm in depth and 3mm in width. Very easily removed with a Dremel and metal cutting disc at 15,000 RPM 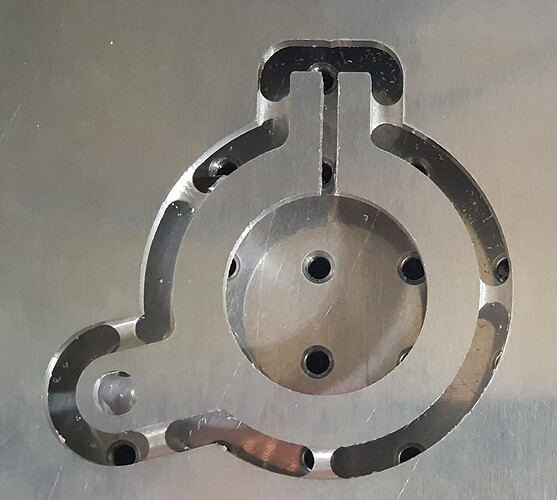 Before any cleaning operations, this is how the part came off the machine. 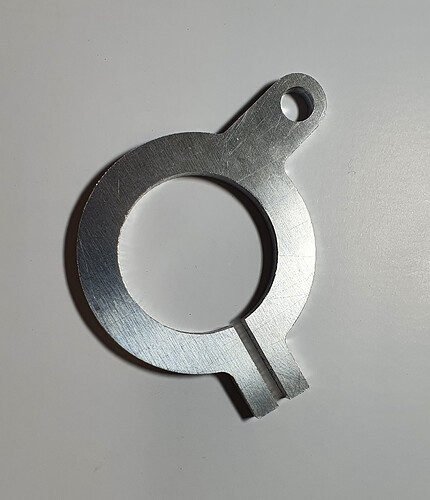 I tapped the 8.7mm hole for M10 x 1.5 thread. The image shows the taper tap in situ. It was an easy cut to make using CT90 cutting and tapping oil. 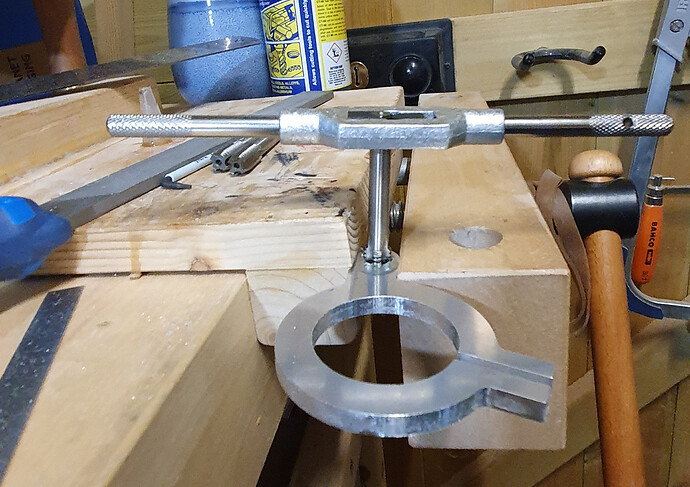 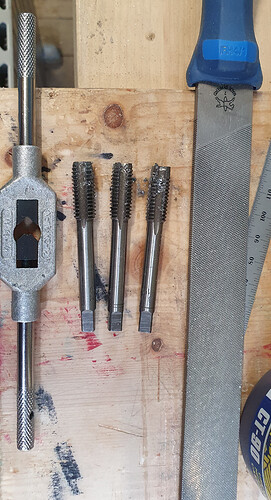 The drill press without a chuck or a depth stop. I used a Starrett self adhesive rule against which to read off the just over 2" of quill travel. 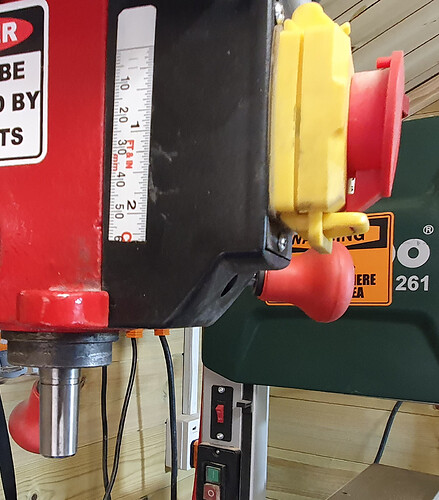 This was a satisfyingly snug press fit. You may notice I had drilled the clamping tabs for a 3mm allen screw. 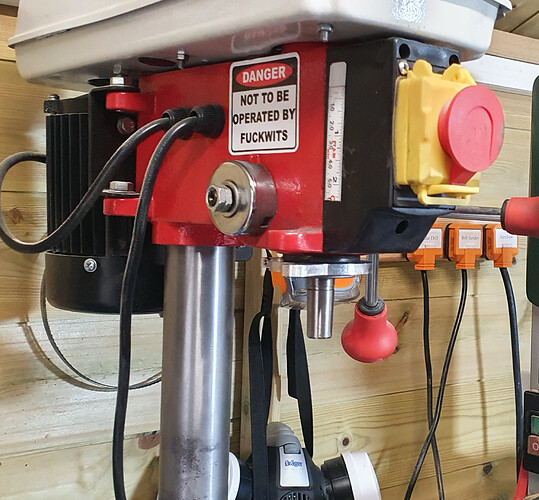 Complete and in situ from the front. With another 10mm of bolt length, I could have used a nyloc nut on the lower end. 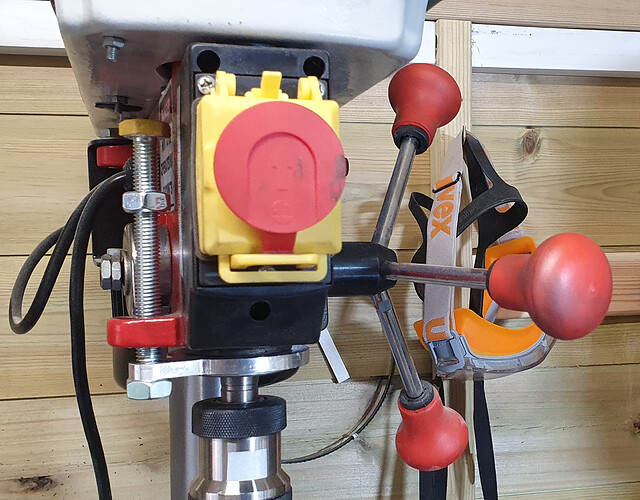 Complete and in situ from the side. It is the top flat of the bolt head that is used as the index.
I coloured it yellow to differntiate it from the surrounding colours. 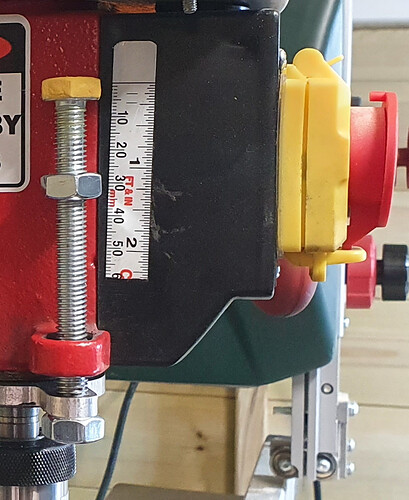 That is it. After the part was removed from the stock, I used a very small diamond needle file to break the sharp edges throughout. All comments welcome.