I hadn’t used my machine in a little while, but I’m getting back into it.

Just downloaded the latest version of Carbide Motion (Build 551, released March 15), ran a few test cuts - the cuts themselves ran fine outside of a couple small issues with the speed of the machine.

I fine tuned everything, loaded up the actual non-wasteable material I’m using aaaaaand…the depth of cut was extremely shallow (far shallower than the zero that I’d set). I stopped the cut, the SO3 performed its normal action of raising the spindle out of the way. It hit the top of the Z axis and then started traveling back down, despite no command to do so. I immediately cut power to the machine to prevent damage to the endmill. I looked at my laptop to and was greeted with the following error: 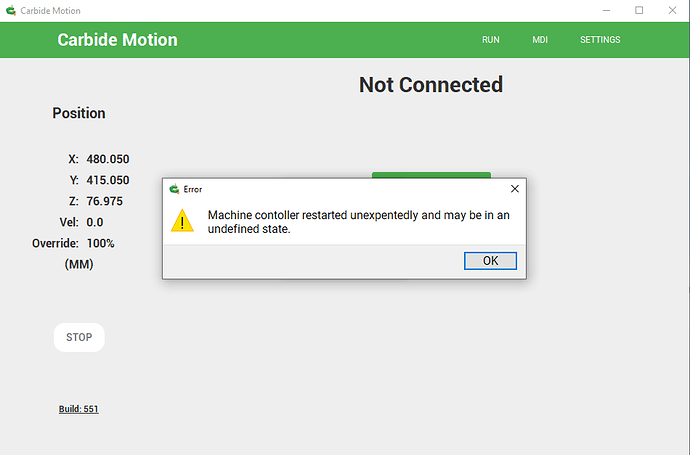 When I powered up the machine and ran the initialization process, the same error happened, except this time it was a terrible chattering noise after the machine had translated all the way across the X axis.

Any ideas on what I should do?

Power everything down and wait a bit, power up following the sequence described in:

Can’t connect to machine or jog

Let us know what you find out at support@carbide3d.com and we’ll do our best to assist.

First, the Z axis is the router up and down.
Second, the X axis travels left and right.
Third, the Y axis travels front to back.

Now, can you explain again what happened? Thanks.

Now, can you explain again what happened? Thanks.

You’re right. Like I said, it’s been a while since I’ve used it.

Power everything down and wait a bit, power up following the sequence described in:

Done. I also reverted to build 542, seems like it cleared the error. I also discovered that the chattering was due to the nut that holds the X axis probe coming loose and sitting on the rail in the path of the v-wheel.

There is no need for feeling stupid. Pencils have erasers for a purpose. Somewhere on the site is an operational checklist. Find that and use it to get your feet back on the ground.

The machine operating checklist is at:

Thanks! I remember coming across this at some point a couple months ago but I couldn’t remember where I saw it.

How did you revert back to the previous version. I am having the same issues. I can run my machine without issue with open builds software but prefer carbide and would really like it to work. Thanks.