Max out the z axis

Which version of Z plate do you have? The original design or the new design?

There is a significant difference between the two.

I have a #500 machine so if your talking of the first version I’m not sure how well that would work. I think it is easier to raise the machine to utilize the entire travel.

That said on mine I added a lower set of v wheels for rigitidy. Something like your idea could extend the travel a bit (always having 2 v-wheel sets in contact), but new limit switch mounting would need to be figured out.

I have #1138. Not sure if that old or new enough for the upgraded plate. Raising the machine I guess you would remove the waste board and lower it to get the full z axis travel. I cut stuff out longer than the machine itself which has the material go out the back or front of the machine using registration pins and multiple g code programs to cut the part. Not that hard you just have to get the registration perfect. This then doesn’t work with removing the waste board. Just seems like moving the z axis tracks and drilling a few more holes would make the machine work to its potential. 2" to 3" is a lot , 1/3 more depth ? Any body else done this ? Ed Ford, do you have any thoughts ?

Hey Kurt-
I don’t think machines have started shipping with the new Z plate. As Craig mentioned, it is much shorter than the original plate. Below is a picture of the new plate and also installed. For my newbie work, the depth limitation is much more the end mills and router bits than the ShapeOko’s Z travel. Most of my mills have cutting lengths that are 3/4" or 1" at most. I recently tried to carve a sign using the 1/32" ball end mill that Carbide sells, but it could only cut about 1/10" deep because past that the cutter widened to 1/8" (the shaft diameter). I assume a much longer one would just snap in my fingers the way so many of the tiny carbide PCB drill bits do. 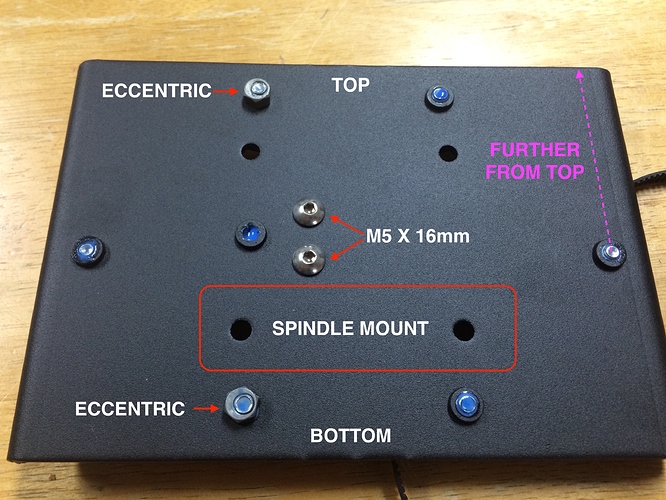 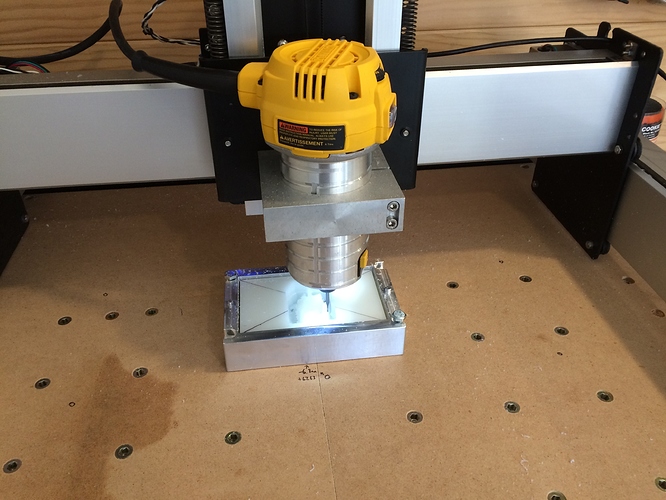 I raised my whole machine and made a new bed. You can see my build log here:

wow I like the new plate. How much and how can I order it ? Seems like it would utilize the full z axis height issue. I am using a 4" long 1/4" ball mill and would like to have the 4" end mill about 3/4-1" into the collet. It seems with this new plate you can fully retract the end mill to clear 3" stock +1/4" and still cut 3" depth.

Mark or anybody else with the new plate, can you verify that ?

thanks guys for all your imput.

A 1/4 endmill sticking out 3" is going to have a lot of deflection. Hope you are taking very light finish passes.

I will start slow I guess and see how it goes.

Hey Kurt-
With the new Z plate on, I’m to move the Z axis 3.1". That is, if I zero the Z axis at the top (where it hits the limit switch), Carbide Motion lets me jog it down 3.1" before stopping and saying that a limit switch was hit. (I don’t have a limit switch on the bottom, so I’m guessing this is a soft limit, but on the Z-axis for whatever reason, this causes Carbide Motion to think a limit switch is hit and then it has to re-home the machine (as opposed to just not letting it jog any further as it does with X and Y movement. Maybe I have a setting wrong?)
-Mark

For soft limits we have the beginning of a section here: http://www.shapeoko.com/wiki/index.php/Grbl#Soft_Limits

And the official docs on it are here: https://github.com/grbl/grbl/wiki/Configuring-Grbl-v0.9

That’s a good looking z-axis plate! Who designed that thing!

The standard machines began shipping with that new style plate about 2 weeks ago. Any machine delivered going forward will include the new plate. Installation instructions are here if anyone is curious of the details.

For anyone looking to upgrade - we’ll have those plates available in the store pretty soon.

@markmoran Regarding the soft limits - AFAIK, they are not enabled in carbide motion, so that shouldn’t be holding you up.

I’ll give this a shot on my machine and see if I can replicate.

I knew you wouldn’t let us down !

Slightly off topic but can you get the aluminum extrusion tracks any longer than the XXL ? Thinking it would be great to get the expansion kit but have y axis tracks 6’or 7’ long. Any thoughts ?

Unfortunately, longer extrusions are not yet available — I wish they’d just put them in the store, but we’re going to have to wait for the next upgrade set unless something changes. I’m hoping the next pair of machines will be HS (4’ x 4’ cutting area) and FS (4’ x 8’ cutting area).

Yeah, we did an informal/unofficial poll on sizes, and numbers were all across the map.

I’d really like to see rail kits, which would allow one to pick/choose any pair (and an adapter kit) and put them together.

Thanks, Edward! Those instructions are great. I’ve been super happy with the new Z plate.

I had turned on soft limits after I bought the Carbide limit switches - I thought that was recommended practice? I turned it off and now I can lower the Z without Carbide Motion thinking it hit a limit switch at the bottom. I lowered it until the bottom Z-wheels were more than halfway below the edge of the extrusion and figured I better stop, but it was more 3.1". And I think I could get a deeper cut by raising the router another 2 inches in the mount, but my mills aren’t long enough anyway.

Are soft limits not recommended by Carbide? I’d think they’d be a good idea to prevent reckless G code, at least in the X and Y, or does Carbide Motion already intercept reckless g-code?

With soft limits turned off, Carbide Motion no longer prevents me from jogging too far to the right (and crashing into the right side Y carriage). I have my X limit switch on the left side so that my home position is in the back left corner rather than back right, and inverted the homing mask to make that work ($23=1). Carbide Motion still prevents me from moving the Y too far forward, which I’m assuming works because I didn’t invert the Y. Is there something further I need to do to get it not to let me run into the right side? Or is there any downside to turning on the soft limits (which fixed that) except for I have to be careful not to jog my Z too low?

You can turn on soft limits AND change the distance it will travel before it hits the soft limit.

Thanks, Tim! I hadn’t known about those variables. Are they ignored if soft limits is turned off? Or do you know if Carbide Motion does its own soft limits when it re-writes the G-code before sending it out?

I’m assuming the Y is larger than the table because the router can hang over the front edge. Perhaps I need to lower the x value to 420 instead of 425 and see if Carbide Motion still lets me crash into the right side with soft limits turned off. And then based on my router height in the mount I’ll figure out a good $132 value.

I don’t know for sure, but I think the soft limits are all in the Grbl code. CM doesn’t know or care about them.

The values are ignored if soft limits are not enabled.

FYI, all the Grbl settings are described here: https://github.com/grbl/grbl/wiki/Configuring-Grbl-v0.9#grbl-settings