I’m hoping to find someone to guide me here…

I’m trying to create a recess for a drawer pull. It’s an easy setup that will be repeatable on a series of drawers. But when I try to model it, I’m getting a very strange result. This is kind of long, but I want to show the process. Details with the step by step here:

This is the result I now have (but you’ll see the problem below): 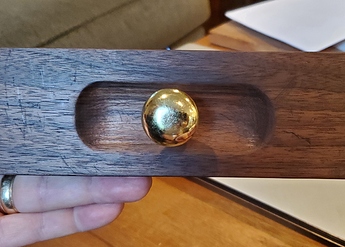 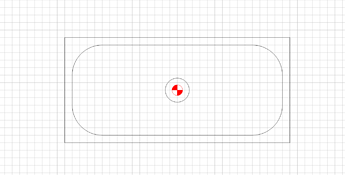 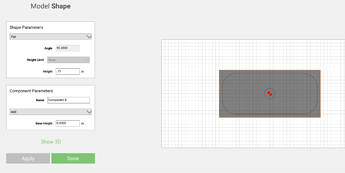 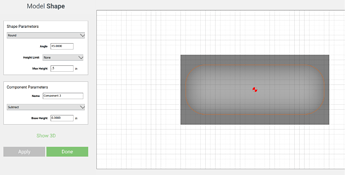 image3178×1618 423 KB
Which works…but leaves a gap under the knob because it’s not flat on the bottom…which is expected and is where the start of the problem occurs. 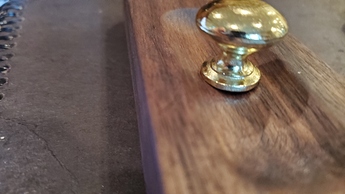 image3814×1614 1.26 MB
SO HERE COMES THE PROBLEM:
The plateau is at the same level as outside of the recess. I would like to LOWER the plateau…make it .2 inches lower than it is right now so that the knob base sits inside the recess a bit.
So I started over, created the base, then lowered the plateau circle by .2

image2796×1332 1.47 MB
Now I regenerate the round recess between the outside of the recess and the lowered center circle 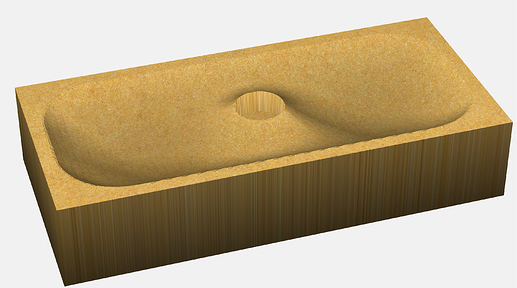 I tried to create an offset circle, and tried to build the recess to the inset (to try to eliminate the circle itself as a divider)…and I got THIS (which I don’t think is even possible - note the overhang inside the hole): 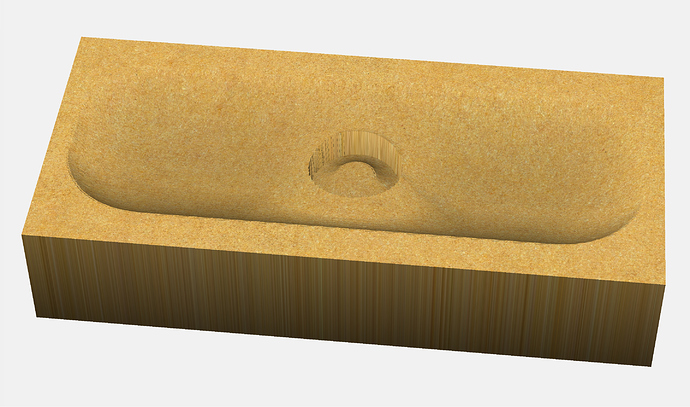 I wanted to add that I also tried reversing the order of the components: Lowering the plateau circle after cutting the recess to the circle…with the same result (exactly).

Then I also tried cutting the entire recess and then raising the plateau out of that…but that fails because the resulting plateau is dished to match the bottom of the recess: 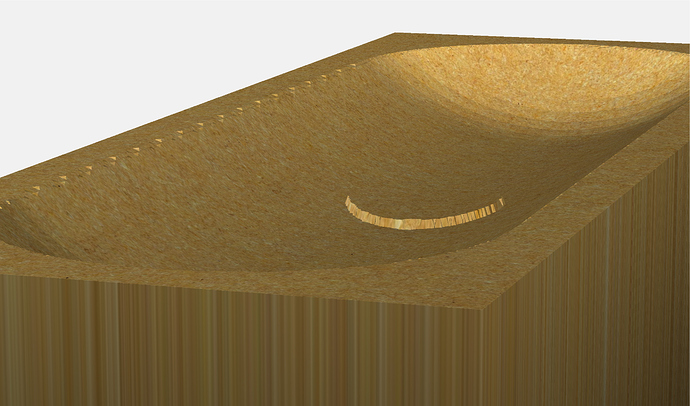 Have you tried the Equal operator? 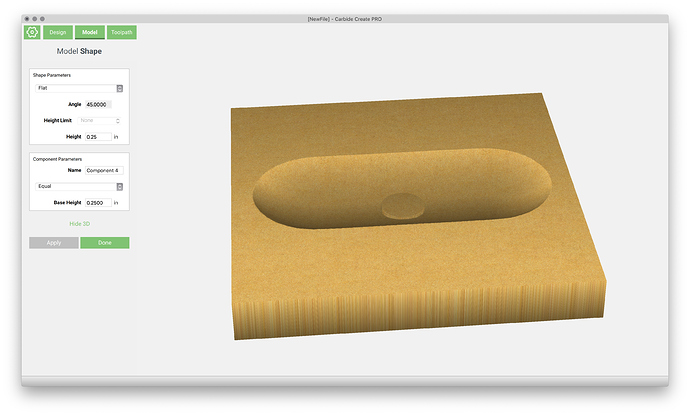 On the last option (the rebuild up)?? Will try that now

@WillAdams OK…that does give me a bump on which to set my knob…and that will work for me, once I address the exact height I want. But it has a straight edge to it…I would have preferred a gradual (rounded) lift to the plateau (like I get if I don’t try to drop the plateau down into the recess. Is there a way to do that?

and @WillAdams…can you try to generate a finish path and see what it looks like? Mine came out looking AWFULLY funky. I used a 1/4" ball

Nevermind…I got that to work.

@WillAdams I think I have it…with a ball end, the plateau looks to be rounded on the rise…I will try it now and if it works, I’ll post a final photo.

Of course, I’d STILL like to know how to get away from the volcano - just for any future projects.

You should be able to model the rise then subtract using the Equal operator.

Example for Will.c2d (461.9 KB)
Here you go…kept it to the most basic…using your EQUAL reduction.

have you considered to just recess it a bit? 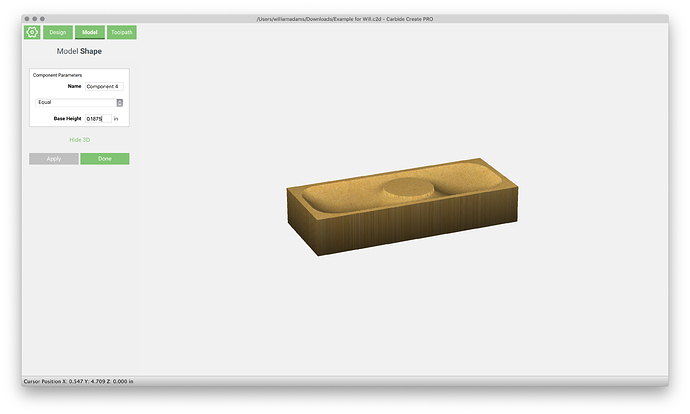 Really close…how did you do that? Were you playing with the Base height? What exactly does that do? And which component did you add base to?

The depth of the pocket is perfect for the type of knobs I’ll be putting on the piece. A shallower recess will not provide the finger room I’m looking for.

It looks like Will might have gotten somewhere in the next post, although it now looks like the plateau is much larger than I want…I guess it would be a trial and error process to make it the 3/4" it’s supposed to be. Seems like it SHOULD be doable with the software without having to inch up to an answer…no?

The base height allows you to adjust things. I was working with Component 4, the inner circle.

You’ll need to model things I think using a smaller circle to lift to and angle/size things to that when cut off it’s the desired diameter.

You’ll need to model things I think using a smaller circle to lift to and angle/size things to that when cut off it’s the desired diameter.

Yeah…Meh. The software should just allow me to do what I need to do without futzing (an industry term) around with trial and error. I think it should just realize the circle is at .55 and then adapt the curve of the recess to meet the ridgeline of the circle. That way, I can empirically specify the size of the plateau.

Having a hard time envisioning a reasonable interface which would allow that — check in w/ @robgrz ?