Regofix, the inventor of the ER collet system in the 1970s, manufactures this: 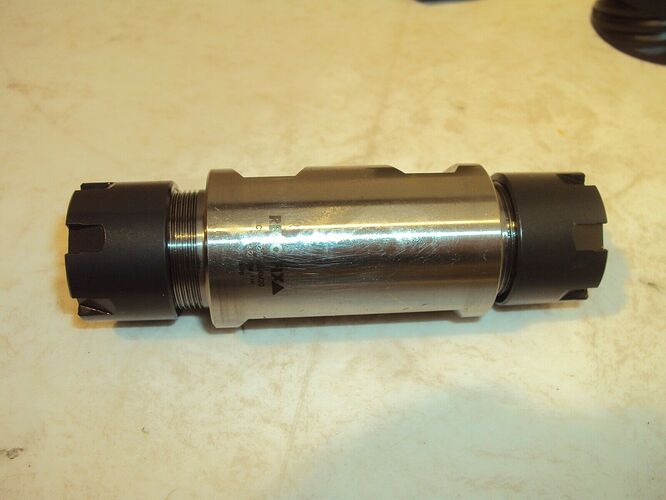 which is probably over twice as long as I’d feel comfortable running, but is on the right track. The eBay listing for it isn’t even crazy expensive.

Again, just looking for options for using my Haimer to find the center of work, and grasping at straws. I’m willing to consider any practical advice.

Tricky problem. The Haimer probe is very nice, but not exactly small - are you sure it would fit when attached to another contraption that further extends the z-height? Just curious.

I’m using 12 mm tools on a Shapeoko, but that’s with an AMB 1050 FME-P with ER16 chuck, for which there are (out-of-spec) collets. Runout with that is worse than with the standard collet sizes, but probably a lot better than an extension that appears to be held with grub screws. Of course, that may not matter for your application.

@spargeltarzan I think I’m circling the drain, and just about ready to give up on the Haimer. So no, I’m not sure!

I had considered AMB, however you just made me question that. Based on AMB videos, I assumed the collets were standard but their own mounting contraption made their use case special; are you saying that they require modified collets?

On a separate topic, are you ready for asparagus season?

@spargeltarzan I have my eye on the AMB 1050 FME-U DI. Have you seen this model in action?

Also, rereading your post, you’re saying there are ER16 collets that fit 12mm tools? Where can you find such a thing?

I don’t actually want to cut with 12mm tools; I just need to accommodate the 12mm shank of the Haimer. BTW I have the “New Generation” that has a more compact body. Seen from the front, there isn’t much to see beside the huge dial and the probe.

On a separate topic, are you ready for asparagus season?

Of course; I’m afraid that will still take be some time… Looks like bicycle season is about to start though, the studded tires are coming off today

Also, rereading your post, you’re saying there are ER16 collets that fit 12mm tools? Where can you find such a thing?

I don’t actually want to cut with 12mm tools; I just need to accommodate the 12mm shank of the Haimer. BTW I have the “New Generation” that has a more compact body. Seen from the front, there isn’t much to see beside the huge dial and the probe.

Good to know, I was only aware of this one, which wouldn’t work in my Shapeoko, 100 mm being to much: 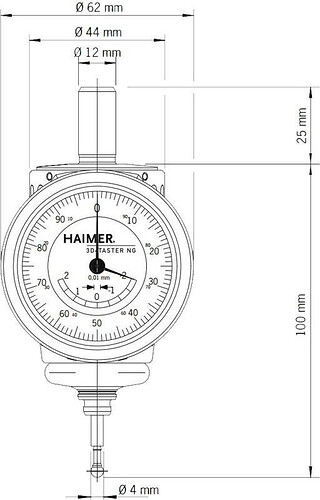 Another idea - perhaps the probe doesn’t need to be in the spindle? As long as it’s mounted at a well-known constant (x,y) offset? Fixing a 12 mm clamp on the side may be easier than fitting it under the spindle.

Interesting that Sorotec goes so large on ER-16 collets. Maritool tops out at 0.4375":

1 Like
UK Based Noob - Metric vs Imperial (I know how long my foot is)
Spindle Nose Alternatives
RichCournoyer (Richard Cournoyer) February 27, 2021, 2:00pm #8

The thought of someone putting extensions in a high speed router that was NOT designed for this scares me. In aerospace we also use industrial high speed motors for cutting Nomex honeycomb core.

An employee was killed by an out of balance long cutter (tool) they went right through his chest, severing his aorta…Meaning LONG unbalanced (G2.5 and G1.0) tools can be VERY dangerous projectiles.

PLEASE DON’T DO IT.

@RichCournoyer I feel you, and you have my condolences. They certainly taught us the same thing in machine tech school, and at my aerospace job! Then again, I survived two wars so maybe I’m just on a lucky streak.

If it helps, I’m actually just looking for a means to mount a spindle probe. I prefer to program with the work offset at bottom center on second operations, and with some of the parts I intend to make with my Shapeoko there is no bottom left corner to pick up on with the BitZero 2.0.

I like @spargeltarzan idea to use a known XY offset for the probe, and at the very least it gets me away from seeking the biggest spindle ever for no particularly good reason.

@spargeltarzan Thanks for the Sorotec link. Until yesterday, I was not even aware of the World of modified ER collets, and reading this today I see it goes even deeper!

I admit that I have not actually held my Haimer up to my machine and eyeballed the clearance. Maybe I should do that before I go further down this rabbit hole!

@WillAdams The Mafell adapter is likely 8mm, not 5/16", and my 8mm Elaire Corp. collet is actually already in the mail so I may go for this just to try it out. Thanks for the link! The Sorotec 12mm collet may actually make this crazy idea possible.

I ordered the 8mm collet so I could use my Noga indicator arm to check machine squareness and spindle tram, and after I had realized that mounting the Haimer was going to be a challenge. In the end, a good old fashioned dial test indicator on an arm may be how I set stock center.

0.0625mm is scarcely 2 and a half thousands of an inch — I’ve been using 8mm and 5/16" tooling and collets pretty much interchangeably for a while now — granted I don’t do terribly fine work, but it should work for your needs if the length isn’t too excessive.

Certainly @RichCournoyer 's concerns about safety should be taken seriously.

@WillAdams In my World, 0.0625mm might as well be a football field. Our Okuma machines were calibrated in submicron: 0.0001mm

I know and understand that the Shapeoko is not in that class of accuracy, but if I follow simple rules like use an 8mm collet for 8mm tools, then I’m on the right track.

One thing I will never do is use inches in any way other than as proper noun, like a name. I will call a 3/8" tool by its name because that’s what it is, and I’ll say silly things like “I’d walk a mile for a Camel”, like the old cigarette ad. I’m that guy in YouTube comments reminding amateur machinists that their thousandths of an inch mean absolutely nothing to the vast majority of machinists, let alone people in the World. I say this as an American.

For an example of this see:

Story TIme… A long time ago… I raised my Shapeoko XY, and Z (rails) about 1.5625" (lol) inches. This was AWESOME because I run a lot of larger parts AND this ALSO meant that the Z would clear my 4th-Axis’ 4.0" (100mm) 4-Jaw, BUT this also meant that I could no longer reach my aluminum table. [IMG_6847] When needed, I would place a 3/4" plywood on top of some 123 blocks…not great, but it worked; however, I longed for my beautiful ultra-flat aluminum table. …then a few weeks ago I saw a post…

You might be familiar with the native size for Makita’s and Carbide3D’s most popular routers for the Shapeoko: 3/8". It requires a special collet (which is actually just a tapered split collet), which I have: https://www.makitatools.com/products/details/763619-3 I would assume a lot of you would also be familiar with Amana, a popular brand of carbide cutting tools that Carbide3D sells. I recently happened upon this: https://www.amanatool.com/te-102-cnc-high-precision-tool-holder-extension-3-8-s…

After much consideration, I now have this ER20 spindle and I have zero regrets. This is a far better spindle in general than a trim router, and it is so much quieter! Because it is balanced, there is ZERO vibration and it gets smoother as it warms up. The whole setup costs more (and weighs more) than a trim router, but not significantly more. It runs absolutely fine on a step-up transformer on 115V, drawing only 1.5A at full speed with no load. All in, it’s a $400 investment, but it is so much better than a trim router.

I would recommend this version for Shapeoko because it has mounting flanges. This makes attaching it much less complicated; you’d only have to fabricate a simple interface plate or just drill and tap the Z.

The only other consideration is shielded wiring from the VFD to the motor, and control wiring but that’s another topic. This kind of setup eliminates the need for the Bitrunner, which was AWOL for a minute, so if you’re shopping spindles on price you should consider the cost of the Bitrunner V2 in your calculations if you want to compare apples to oranges.

Are you mounting that to a HDZ or Z-Plus?

I no longer have a Shapeoko of any kind. I got a notification when @WillAdams reopened this thread, so I left some of my thoughts about spindles for hobby machines in general. Sorry if that wasn’t clear.

After I got my first Shapeoko, and coming from a professional machining background, I started asking questions about what kinds of spindles people use on hobby machines. That led to some of the threads Will and I linked to. I don’t personally understand how folks are satisfied with the limitations of a trim router, and I wanted to explore other options.

I sort of understand why Carbide3D doesn’t do spindles (it’s the Wild West!), but I also think that’s a not a very responsible position to take. I just wasn’t that impressed by the Carbide3D Compact Router, from vibration to noise to collet selection to the bizarre tendency for all tools to be 1/4" despite the native bore of the spindle being 3/8".

I would not be surprised to find out that Carbide3D is developing an improved router/spindle, because they have a tendency to ghost until the full reveal of new products. I would recommend that they beta test, though, considering issues that I and others have had with the recent machines’ tables. That’s all I’m going to say about that.

Unless you have specific questions about this spindle (which I am happy to answer!), this will be my last post on the topic. Here are photos of the front and back of the actual spindle I bought for my other machine. 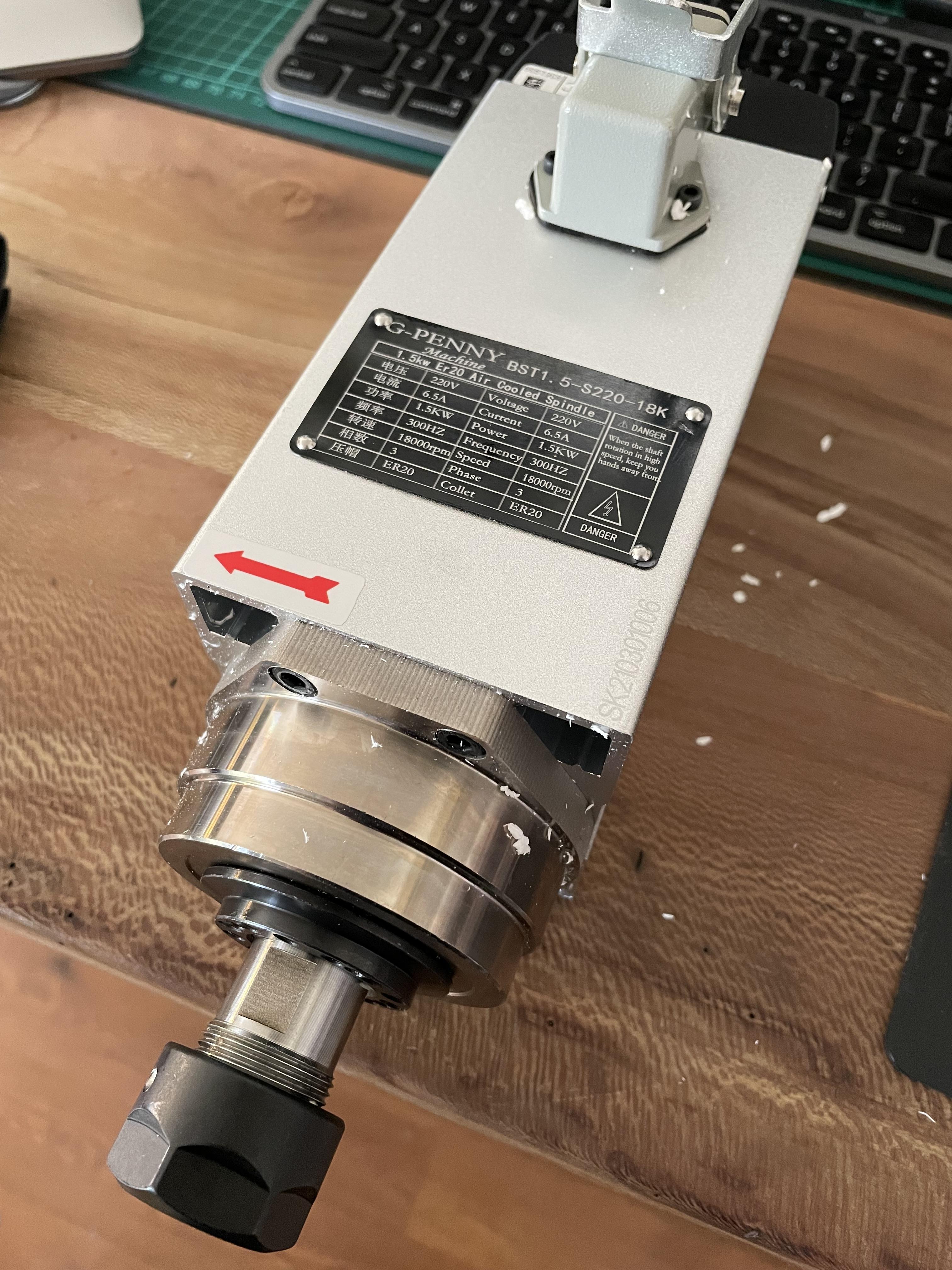 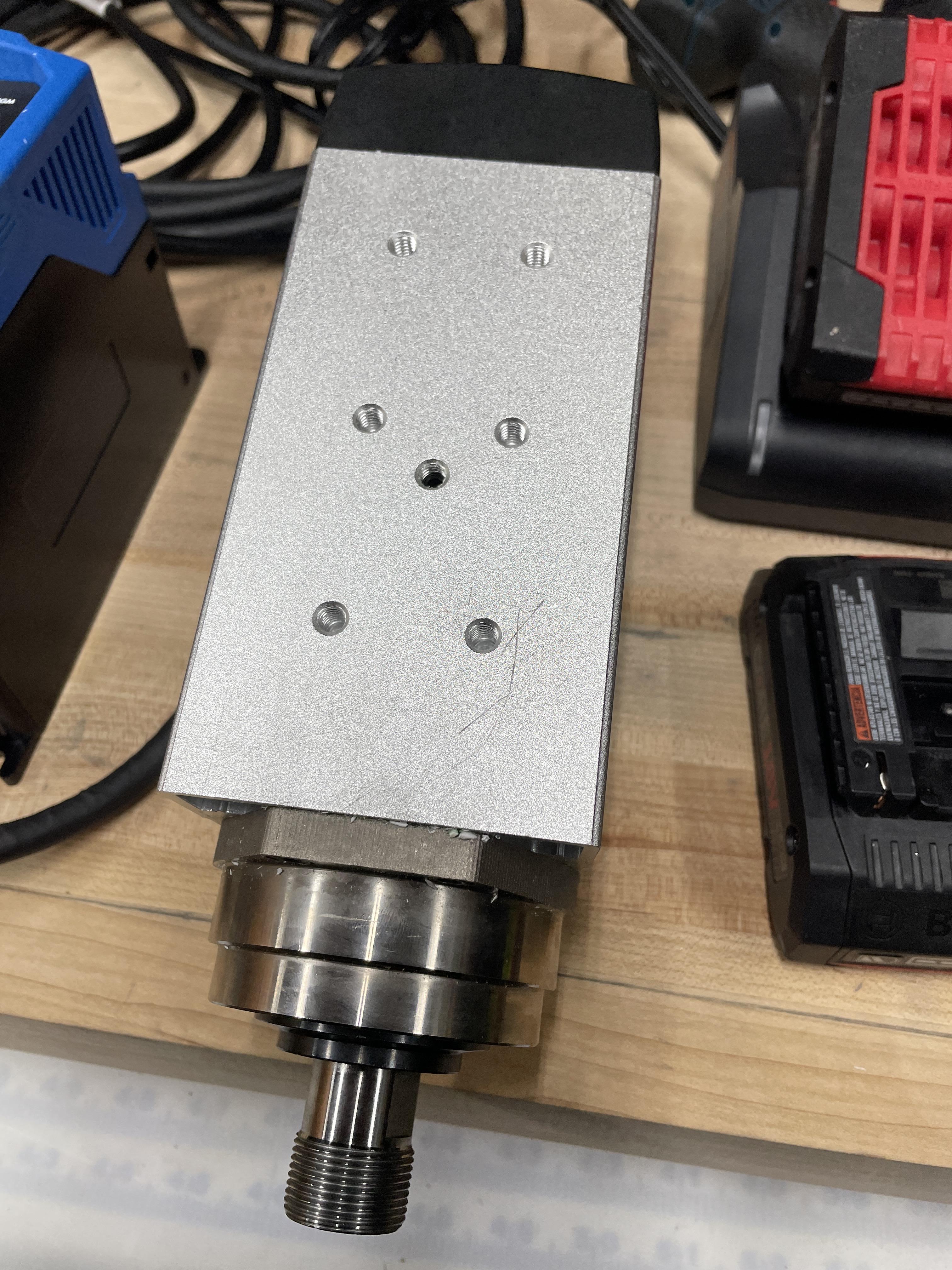