Need help to diagnose this complete loss of power, please

Carving as normal without any issues. Have surfaced some wood and was carving a couple of patterns. All progressed as expected and suddenly I was aware the router was not moving (still spinning) and CM had lost contact with the cutter.

Having stuck the inline switch to a convenient spot on the machine, I will have to remove it and look at it. Is this a known point of spontaneous failure? With electronicss, things either work or they don’t. A potential failure a short way (9 months) through their service life is disappointing.

Write in to support@carbide3d.com and we’ll do our best to assist.

Thanks Will… resolved. Debonded the inline switch and checked its resistance. All as it should be with .5 ohm and so assembled that again. Was just undoing the controller box and noticed the wire with the keyed plug was not attached.

ain’t got no gas in it
hmmmph

You know it, Mike. I feel really stupid but as luck would have it, I have only ruined one piece of work.

[typed while my machine is resurfacing the dumb mistake] 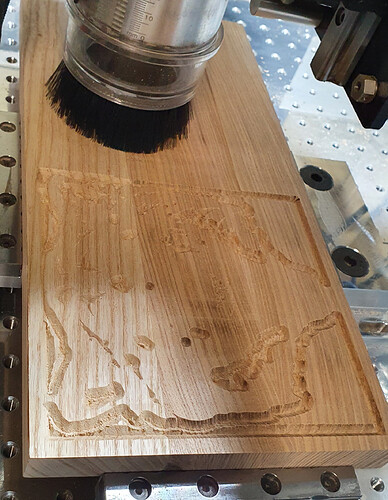 All working as expected again. Too late for some noisy carving so a little laser work was just fine to test that everything was still ok. The belts were tensioned some days ago using the belt tensioner pattern designed by @neilferreri and printed for me by @LiamN. The belts have not changed in tension as is measured by the Gates mobile app. All belts are still reading at 135Hz so an impressive performance from a simple modification.

For the images below, I used a 4.2W JTech diode laser, in a magnetic mount and shroud, which was driven by Lightburn at 20% power and 500mm per minute (19.68 inches) traversal speed. 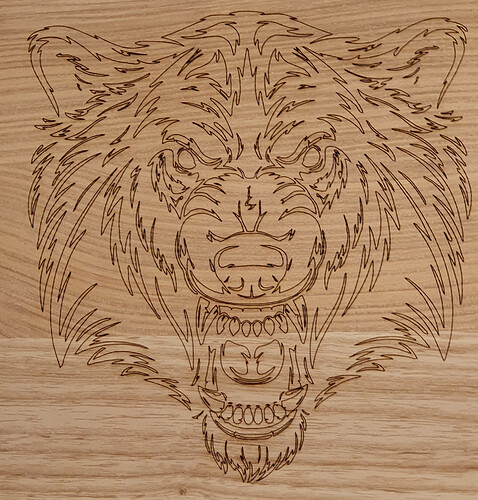 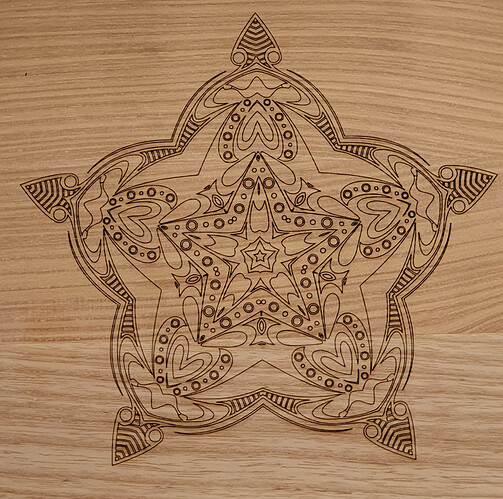