My wife asked me to make a custom clock for a co-worker that is retiring next month. I have been hesitant to make them in the past due to a number of reasons but the main one being double sided carving and not wanting something like that to end up off center. It would drive me crazy to have a click that hangs slightly off center resulting in 12 o’clock being even slightly skewed from the top.

So to put my own mind at ease I decided to carve a jig that can be used to ensure I get everything aligned. I started with my circle for the outside of the clock and then the square at the center to fit the mechanism. I also included a keyhole for hanging. Then I worked from those to build my jig. I did a 0.001 offset to the outside of my main circle and then made that into a pocket where I left a post in the center that was exactly the size of the hole for the clock mechanism post and a post exactly the size of the keyhole hole. 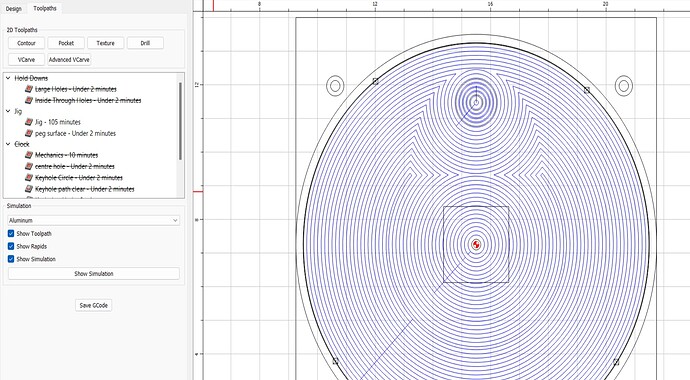 The post for the keyhole is slightly shorter since it does not go all the way through the clock. 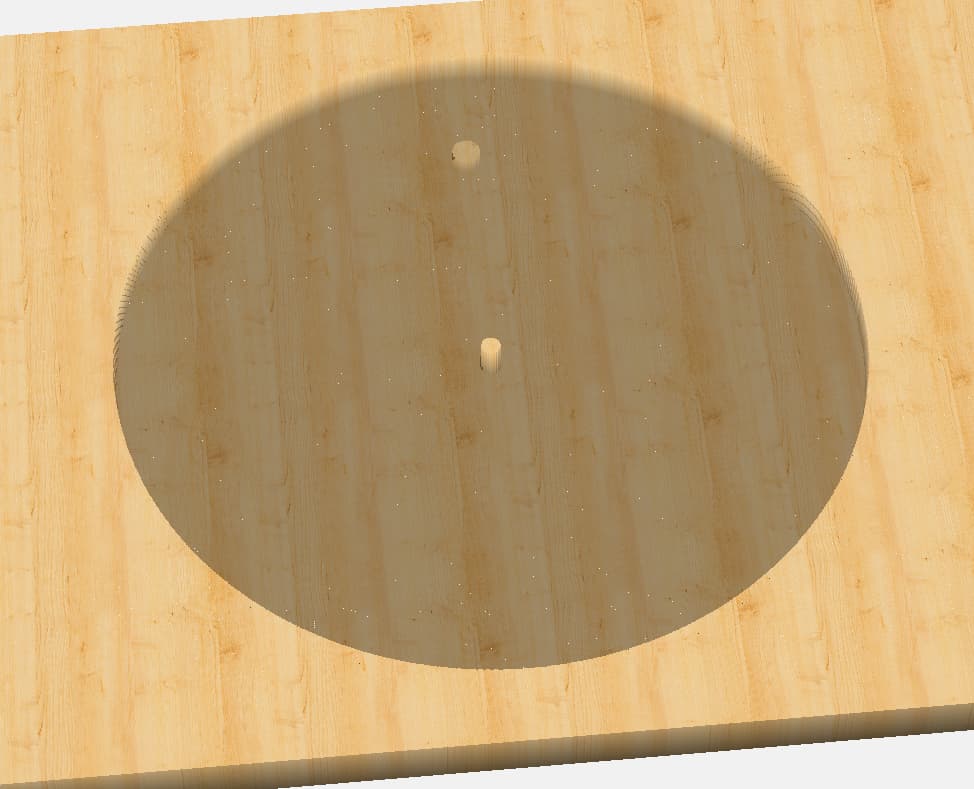 Once the jig was carved I could focus on actually carving a clock. I started with hold downs to bolt the board to my threaded inserts in my waste board. The are sunk into the surface of the board which gives me the ability to surface the whole thing without worrying about my work holding. After carving the bolt holes I take the clamps off and mount the board using my hold down holes I made. Then I surface it.

Once it was surfaced I carved the back parts of the board and cut it out. Giving me a blank front and back that was ready for the mechanisms and to bu hung. 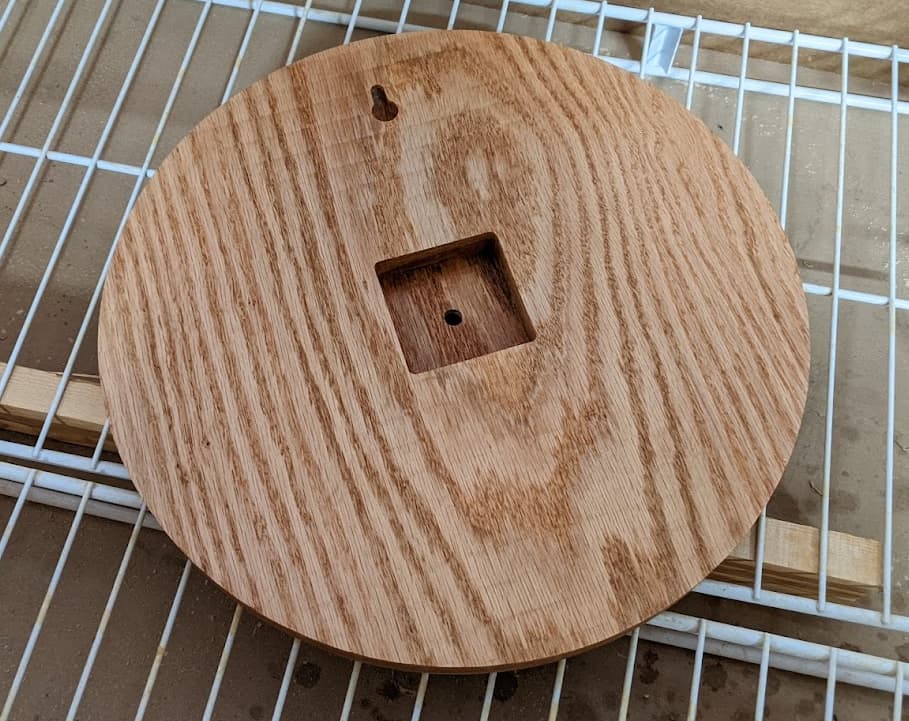 I still used Carbide Create to create the clock face by using the circular array tool to layout my minute and hour markings. I made a small rectangle and placed it at the top of the clock and used the array tool to make 12 of them around the circle and then did the same thing with a smaller rectangle to make 60 of them around the circle. The lines in the circle are for making it easy to find the center of the circle for the array tool. I then inserted the text and rotated each one by 30 degree increments to have them oriented properly for the clock. 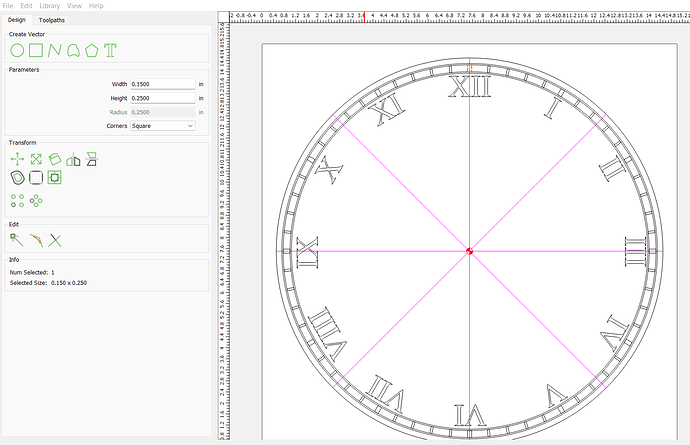 This is where I exported from Carbide Create and imported into Lightburn for the engraving. I added text to personalize the clock for the retirement and set the engraver to fill the objects. 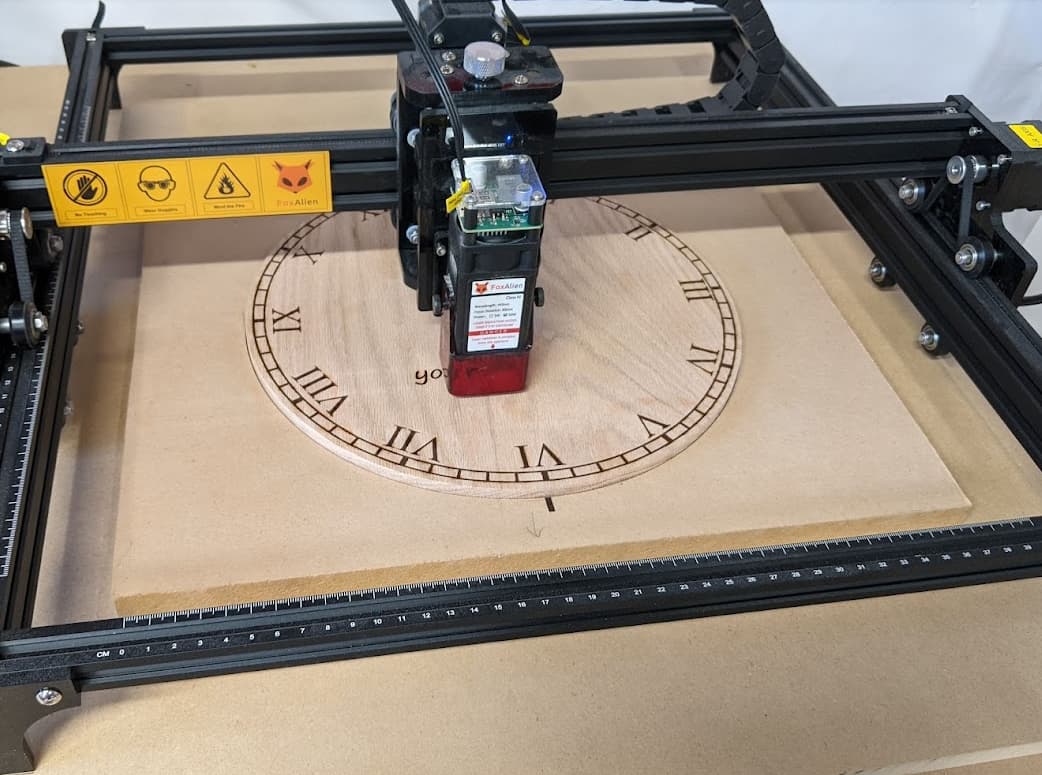 I am hesitant to include a picture of the final product since it includes personal information but I have made another more generic one for photos that is just finished carving. 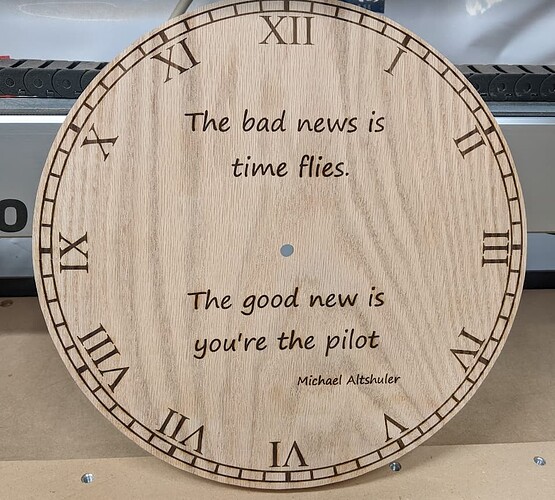 Looks great, and a good write up Ryan.
I only hope that the proper clock has “good NEWS”.
Don’t worry, you are not alone, we have all been there!

Wow, thanks for catching that. The proper clock has something completely different and has been proofread much better than this one.

If you remake the clock older clocks have IIII instead of IV for 4 oclock.

Proof reading can be very hard on your own work. Always double check especially names. For instance Deborah Debra. Nothing worse than mispelling a personalized piece. In your case a spell check would not catch a missing s.

No regerts when getting a tattoo.

Yeah I even sent this to my wife and she didn’t catch it either. Have to be more careful. This really was not for anyone so not a big deal but still annoying. I am thinking I might surface the center area and re-engrave it.

You may need to deepen the clock pocket. If possible keep the clock works from sticking out proud of the back surface. It will make the clock hang crooked.

If possible use black hands for contrast so the time can be read from across the room.

To calibrate clock usually minute hands are slip and hour geared. Turn hour hand to 12 with back gear and move minute hand to 12 (slip). Then use setting gear on back turn full 12 hours to check clock is calibrated.

I think I have it deep enough but will check again once the poly coats are dry. All the hands I bought are black. I did not think that any others would look good either.

Thanks for the tips on calibrating. I was wondering how that worked.My mechanisms did not come with any directions.

Oh I also redacted some information. Here is the clock that my wife ordered. Won’t have the hands on it until tomorrow some time though. 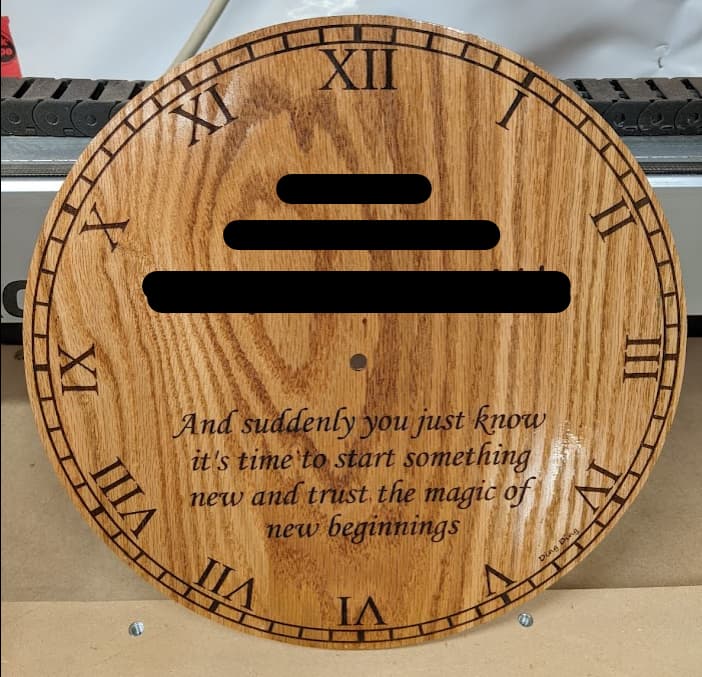 Thanks for sending me down that rabbit hole by the way. Started reading up on why the older clocks use IIII instead of IV. Still don’t seem to have a definitive answer but it was interesting to read up on nonetheless. Now I guess I will have to offer both options. It also makes me want to design one the replicates the clock face in Big Ben as well which uses the IV notation.

Ryan - not sure why they would use IIII either. I also don’t understand why the numbers on the bottom half of the clockface wouldn’t be flipped around to read upright. But, sure enough, the clock I have is made the same way! Funny that I never noticed before seeing it here! Clock looks great!

“… not sure why they would use IIII”

I seem to recall it has something to do with the Roman god Jupiter, which the Romans spelled IVPITER.

Found this for you: Why Do Clocks and Watches Use the Roman Numeral IIII instead of IV?

There are a number of theories. @HaroldO has posted a reply with a really good article.

Found this for you: Why Do Clocks and Watches Use the Roman Numeral IIII instead of IV?

And it is finally dry and includes the mechanism. 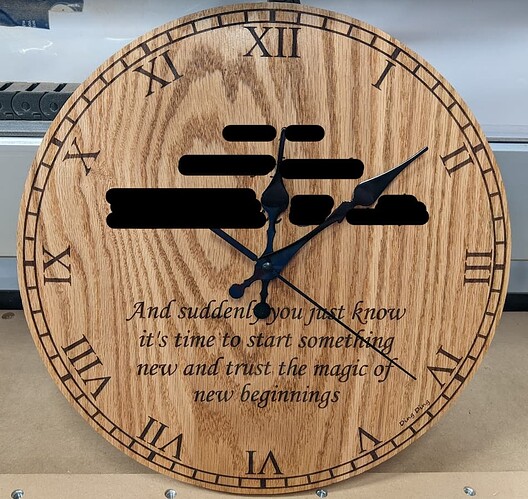 Though of course the fact it is my preferred theory is totally irrelevant. I just like the symmetry.

Now that it has been pointed out to me and I have read many theories I do like this one as well. The symmetry by using the IIII style is nice. It still feels wrong due to the fact that I always learned IV is the correct way to write it though. I will have to offer both options in the future.

I suspect that a few thousand years ago there might have been more flexibility as to what is right or wrong… I’m sure IIII would be acceptable as four by a Roman accountant:)

Japan has a similar duplicity with the number four - it can be pronounced shi or yon… both are correct but one sounds a little like “death” so is avoided in some situations.

The story on the Romans that I heard is that they were going along well with “I”, “II” and “III” when four came along. Some dope noticed that they hadn’t invented five yet, so they just used “IIII”.