I have started a new project today which will assist me to engrave dog tags for medical alert dog tags. I have the diamond drag engraving bit arriving next week so I had thought that now would be a good time to prepare the ground. The jig is only required to support the dog tag during the engraving/laser process. My main objective was to create something which was accurate and easy to use and would not be too awkward for removing parts which had been machined.

I created a .png image of the tag and after making it monochrome and high contrast in Affinity Photo, I uploaded it to CC and used the very useful trace function. The .svg file was unedited and used exactly as it was produced by CC. I used a digital caliper to assess the thickness and the length and width of the dog tag. When bringing the file into CC, it was the measured values which I used to scale the object.

Next step was to decide on an overall size for the jig and then mill a piece of scrap MDF to the correct size. I did this by working from the centre outwards (it is much easier to find the centre of an irregular shape than an accurate edge) and allowing the stepover value to be added on to my overall size.

I had wanted to ensure that my pocketing operation would cover all of the stock necessary. I chose a #201 three flute endmill of 1/4" in diameter. My experience has been that the pocketing operation traverses the material in straight lines if it is not following an adaptive toolpath and it leaves the workpiece with 90° corners where pocketing paths cross each other at a right angle. A contour pathway would possibly have left me with rounded corners on the workpiece.

The workpiece was held with painter’s tape and CA glue and my new refinement to that particular technique, which I have found to be really usefull on many occasions, was to leave a space the whole width of the #201 endmill diameter along the perimeter of the workpiece. The opposing tape on the spoilboard was laid in position and then trimmed with a sharp knife to the same dimension as the tape on the workpiece.When the cutter removed the last of the stock, there was no fouling of the painter’s tape to be seen and no gumming up of the end of the cutter.

The next step was to bring the SVG file into CC and position it for cutting. It only had to be 1.5mm deep but it was not to have any visible slop. This would prevent the engraving bit from pulling the tag out of alignment, which would probably be very noticeable when it is just text which is the main subject matter.

After the tool path for the dog tag was created, a toolpath was added for a couple of relief holes so that if the snug fit made the dog tag too difficult to remove easily, just using something to get under the tag would easily remove it. I was not sure how accurate the dog tags would be from stamping to stamping. I had chosen to use aluminium stampings because there would be no need to deal with trying to engrave the reverse side while avoiding the rolled edge of stainless steel dog tags.

Both toolpaths were milled in around 4 minutes total time. The jig was separated from the painter’s tape and clamped against the newly installed angled aluminium rails which will assist me with a task which requires a flip jig. Rather than construct an X axis flip jig, I have opted for accurate workpiece positioning against the angled guide rails. When the jig is held in place with several Gator clamps, there is no movement in the X or Y axes. I have used the thin end of the clamps butted hard against the jig because it lessens the risk of a tool hitting a clamp.

Some illustrative images should aid clarity… The following image shows the milling of the pocket toolpath about 70% completed. 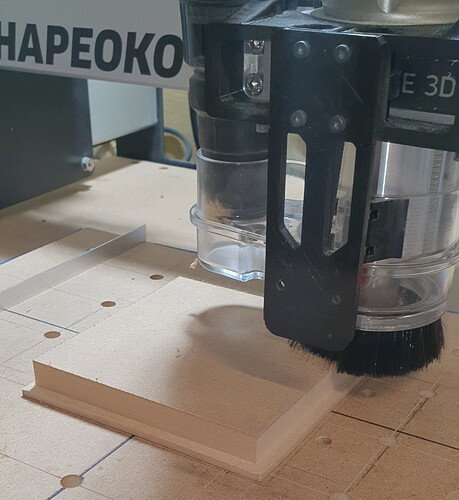 The next image demonstrates that there is no painter’s tape to be seen on the final cut of the stock material.

Here you can see that the final cut was just through the stock but it had avoided the spoilboard. The datum lines have all been left intact and no painter’s tape can be seen. I will use this method again because it makes more sense to me than cutting painter’s tape with a super sharp cutter.

The next image shows the shaped jig and the relief holes. This pattern was also cut with the #201 endmill. The plunge speed was 500mm and the feed speed was 750mm. The router was set to 15000. As you can see the flatness of the cut both here and at the edges in the pocketing machining to square the stock, the finish is excellent. 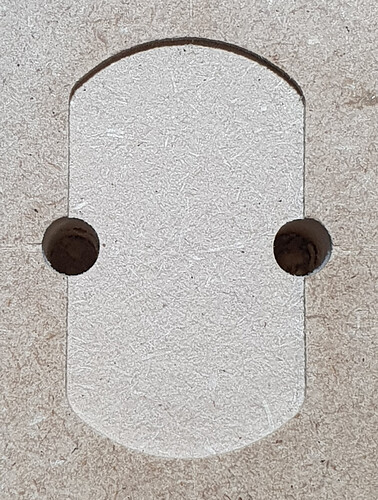 The next image is of the jig clamped hard against the aluminium angle rails with the thin edge of the Gator clamps. 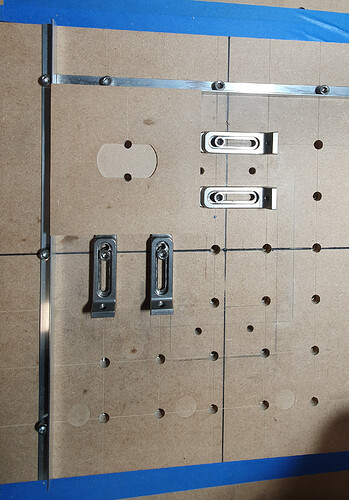 Another image to show that the angled rails were installed at 90° to each other and the accuracy is confirmed by how tightly the newly milled jig stock butts against the angled rails. There is no daylight showing between the angled aluminium rail and the stock of the jig.

The next image demonstrates an anodised dog tag in situ. 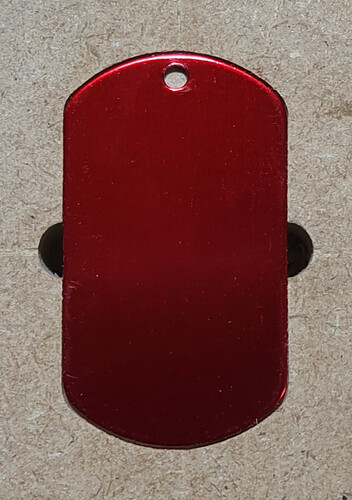