A few months ago, my work bought a Shapeoko Pro XXL to use for prototyping. I’ve been the lead carpenter in the shop at various capacities for about six years, but never really considered the practicality of owning a bench top CNC.

Figured I should make a proper enclosure since I’ve had it running nearly every day since assembly!

I used 8020 extrusions for the framing with 3/4 birch for cabinetry and workstation trays. 1/4 acrylic was used for the windows and I sealed it up with rubber gaskets. The sound isolation is surprisingly good. When used with a Festool CT26, you can easily have a conversation next to it. 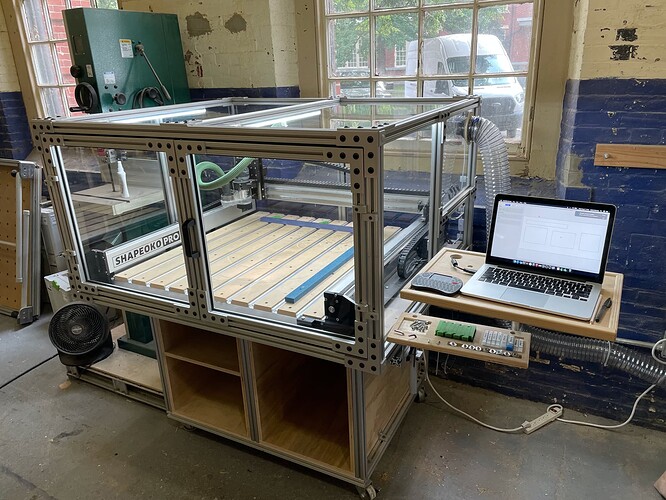 Wow looks like crazy expensive overkill but then again EVERYTHING in my shop is covered in a layer of very fine MDF dust.

What other project have you built out of aluminum extrusion?

Thanks! We had initially bought the aluminum and acrylic for a pop up event (I work for a large corporation) that was ultimately canceled in March 2020 so we had almost all the materials in storage anyway.

I like to build anything I can manage out of 8020, if the budget allows - especially if it will see daily use. I’ve designed and built a lot of rolling workstations and fixtures for the photo studios on the campus, usually I go for ply-veneer core melamine for the table tops.

Tbh, I really wanted to contain the sound, since I’m working literally next to this machine milling and assembling retail fixtures 8hrs a day. I’m happy to report it can cut down the sound by 40%.

Dust is most certainly an issue (MDF, mostly) and I’m working towards an effective solution for the table saw + chop saw stations.

Very nice. What did you use to secure plywood cabinets to extrusions?

I just used 2-hole 8020 L-brackets and roll-in t-nuts. 4 on each side. I wanted to be able to pull the cabinets out to modify in the future rather than trying to work underneath the table, so they can be easily removed.