No prompt for bitsetter tool change

I had a simple job set up with two toolpaths, the first with an 1/8" bit to do some detail work and then a 1/4" to cut out. However, when the job started, it just went right into the second toolpath without prompting a tool change.

Bitsetter is set up correctly, it probed at the start of the job. I’ve confirmed that my Carbide Create post-processor is set up for Carbide 3D Shapeoko. I also went back to confirm that I did, in fact, have two different bits set up in the toolpaths.

What reasons might it just skip over the tool change? I did have the toolpaths set up in two separate groups (I was just exploring the feature) but it doesn’t seem like that would have been the issue.

What should I troubleshoot next? Any suggestions on where to look? Thanks! (Carbide Create file is attached for reference)

You are using a #251 endmill for both cuts, so no need for a tool change.

Geez, I’m dumb! I don’t know how I overlooked that. This is only my 3rd project so still getting up to speed. Thanks Will!

And I know this is an overly simple project but it is for my daughter’s 2-year old birthday! haha

There is a mouse-over which will denote details of the toolpath in question: 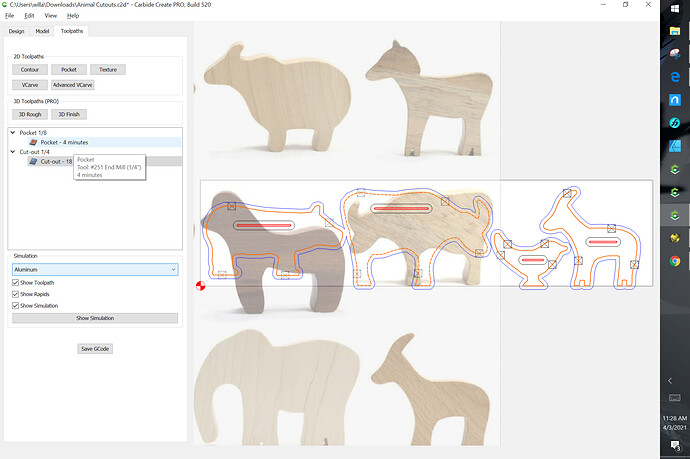 I usually put the endmill # in the Toolpath name and then group them by number in case I need to break a project down into shorter time periods.

Note, that when starting a project with CM, it will list the different used tool numbers. So you’ll be aware of the number of tool changes.

For future reference, if you selected Advanced Vcarve and you Select Area Pocket Tool and you change to a particular size bit like the #102 1/8 inch bit. Additionally you choose the Vee bit as a #302 60 degree. Then you save the tool path and set up and get ready to cut it but you are only asked for the #302 it is possible that your end mill is too big to fit into the areas you choose to pocket and set the maximum depth for. This is not our case here but in the future if this happens look at which end mill you selected and try a smaller size to see if it fixes the problem.

…and one of the best reasons to ‘Show Simulation’ if ever there was one!