Has anyone else noticed that there is some thermal drift, mainly in the y-axis, of their Nomad 3? Here is the situation that I am seeing:

I have been using my Nomad to cut small plastic and aluminum parts, mainly experimenting with gears so far. I really have not gotten very far and only made a handful of parts. Some of the larger gears have more than 2 hours of machining time in them, but I see the same phenomenon on parts that have less time as well. Basically, I am noticing some drift, I think it’s mainly in the -y direction, that seems to correlate with the amount of time the machine is on, and how hot it is.

I notice the drift when I rough cut a circular shape, and then come back later in the job to add a chamfer to a top edge, or come back to a feature do a finishing pass that I roughed earlier in the job. I can hear that there is uneven cutting (cutting air on one side and taking too deep of a cut on the other. I work on relatively small parts, but I think it’s within the capability of the machine. I think the drift on the order of about 0.1-0.3mm of drift from cold to warm machine based on the size of features I’m machining, and the eccentricity in the parts that I’m making.

As a next step, I intend to try to measure the drift by doing a test cut where I engrave circular patterns onto some stock at different positions on the bed and then run the machine for a set amount of time, and then machine some concentric circles around the original ones, and then scan and measure the position of the circles compared to one another. All in the same setup, without re-homing or zeroing between jobs. If that doesn’t show the issue clearly, I’ll look into the repeatability of the homing on my machine and other potential sources of error.

A little back of the envelope math is telling me that maybe 0.05mm would be reasonable if the spindle is getting a bit warm. I guess if the rest of the entire machine, steppers, lead screws, and everything is getting a little warm, and there is just a lot of thermal changes in the machine from cold to 2+ hours, that 0.1-0.3mm could happen. I could try to preheat the machine, or make some modifications to it to increase airflow or something like that. I could also just adjust my expectations for overall accuracy of this machine over longer jobs.

I’m curious to hear the thoughts of other people with more experience with this machine on the overall accuracy that can be achieved. So far I’m enjoying my machine, and after getting familiar with it’s limits have found it to be pretty capable overall. Here is a picture of some of the gears: 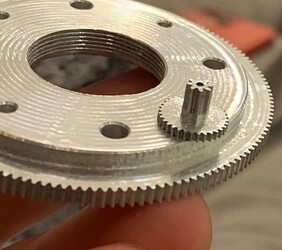 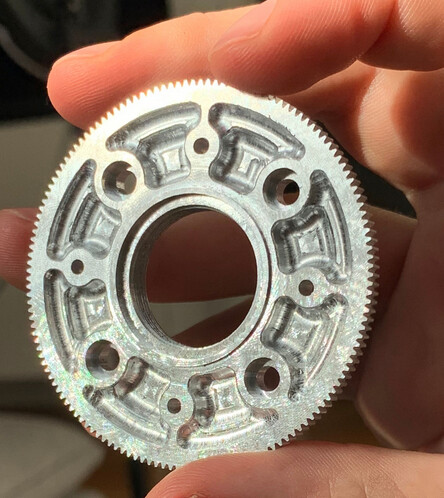 I’ve never observed this, though I know in theory it’s possible. But there are a couple factors that could also be at play that would make it difficult to conclude this with a degree of certainty.

a) Lost steps. Between operations, it might be worth trying to re-home the machine. This would eliminate any sort of drift.

b) Backlash. If for example you have a roughing toolpath, some toolpaths elsewhere, and a finishing toolpath, the first and last toolpath could be off by a thou or two just based on which direction the machine is approaching the part from.

c) The harmonics of the machine could favor one direction over another, though this is less likely. On my old Shapeoko 3, certain directions of cutting were more prone to chatter than others.

Curious to see where you net out though with further digging.

Its a common practice to warm up your spindle for a bit before running some parts but that wouldnt really have an effect on your cut parts more so then just chattery. How are you holding your parts down? Thermal expansion is for sure a thing and actually a large part in why really high end 3d printers typically will do a warming cycle before their bed mesh so its not super out there to assume there would be a measurable difference in parts on the nomad. That being said I have never had an issue with mine even when I diddnt let the spindle warm up all the way. How cold is your shop area? Im intrested to see where you lead this too aswell. Are your parts hot to the touch when cutting?

Thank you both for the suggestions!

I have been running some testing over the past few days and I have come to the conclusion that the position that the inductive homing switches trips will change by up to 0.25mm on my machine as the machine warms up to a steady state operating temperature. The heat is mainly coming from the stepper motors which thermally saturate at about 35-38 C on my machine, which seems normal. The temperature swing that causes the error that I measured in the inductive switches is about 15 C (my machine is in a climate controlled garage at about 20C.) So this is about 0.016mm/C temperature coefficient observed for these sensors. I’d be curious to see the datasheet of the inductive sensor used in the nomad 3, to see how that compares. I think that there should be some amount of actual thermal drift of the position as the machine changes temperature, but it seems to be about an order of magnitude less than the changes from the switches.

I also noticed that the error changes/builds up much more rapidly on the x axis than the y axis, which makes sense because of the proximity of the stepper motor to the switch. I didn’t measure the effect on the Z axis. I think it would be similar to X.

How did I determine this?

I used a 3D touch probe that I will post about in unsupported later. It took me a while to validate the repeatability of the probe and to use it with GRBL. Ultimately, I found that I had two roll my own gcode sender and probing routines in python to be able to parse the PRB response from GRBL, which was kind of time consuming. In the end though, I have a reliable 3d probe that can do center finding of an internal or external circular feature, and it appears to be repeatable to less than 0.01mm. I will add more probing features later as needed.

I have seen elsewhere on this forum that the Nomads effective resolution shouldn’t be considered to be better than 0.025mm. However, I have found that the resolution and repeatability in controlled circumstances is actually less than 0.01mm.

The Nomad uses an 8mm lead leadscrew and the GRBL settings are about 200 steps per mm. This gives 0.005mm/step absolute max resolution. The motors appear to be plain 200 full step per revolution nema 17s. So this means Nomad uses 8 step microstepping, and I’m seeing repeatability of the about +/- 1 microstep usually for the probe, which is as good as I could hope for. I regularly see either the exact same reading repeated for repeated probes or about +/- 0.005mm (one step). For machining, the general consensus is that micro stepping isn’t super reliable, for probing though, it seems like it is to me.

In order to reproduce the effect that I first posted about I did the following: I ha been using the machine all day and it was fully warm. I clamped a bearing to the bed, homed the machine, and found the center of the inner race a few times, everything was repeating to 1 or 2 steps. I probed again after homing the machine and didn’t see any real shift. I left the probe in the spindle for the rest of the testing and controlled the orientation according to the prob calibration routine.

A few days later I checked again after turning the machine on from a cold state, and homing right away. The zero point shifted 0.19mm in X and 0.24mm in the Y and was repeatable again to within a step or two. Issue reproduced!

A few days later I realized I couldn’t differentiate between geometric thermal drift of the machine and thermal drift due to the sensors so I repeated the above test with a check for homing:

I turned the machine on from a cold state, homed, and checked the position of the bearing. It was the same as the last trial when I started from cold within a few steps, meaning it was about 0.19mm on X and 0.25mm on Y from when the machine was at steady state.

As far as I can tell, a tried and true limit switch would probably do better than this and be less sensitive to temperature. The machine itself seems to be resolving to about 1 or 2 steps, absolute worst I agree that you shouldn’t count on better than about 1 full step or 8 microsteps for machining purposes. To have your homing switches introduce an error that builds up steadily from the time you turn the machine on over the course of a few hours to reliably be 50 steps, or 10x worse, seems like kind of a bummer. I’ll be looking into whether or not I can retrofit with regular limit switches.

Looking forward to the discussion, here is the raw data: 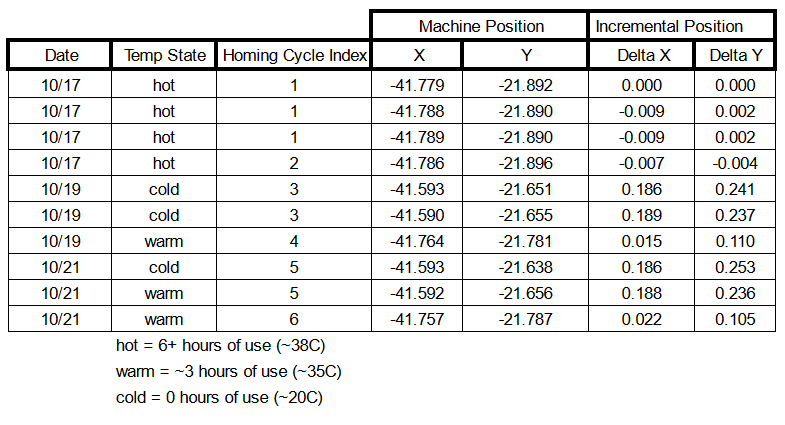 Did previous versions of Nomad have mechanical limit switches?

What are the drawbacks of those vs the inductive ones used on Nomad 3?

I suspect the change was so as to have parts commonality w/ the Shapeoko Pro/4.

Interesting result. I’m curious about the result in the Y axis the most, as the homing switch and stepper motor are on opposite sides of the machine. Hard to see how thermal changes affect that axis. Maybe there’s a little phantom current and they warm themselves up…? I don’t suppose you could get a little infrared thermometer and check the actual temps of the switches in your testing scenarios…

Also might be worth doing the “accelerated” test and hitting the switches with a hair dryer for a few seconds to simulate thermal saturation, and even beyond.

Regarding mechanical switches, in addition to what Will mentioned, few other things weighed at the time the decision was made are:
Fewer moving parts (inherently a failure point in itself),
Less worry about over-travel/crash protection of switches. This was a bigger issue on the S3’s. I’m sure we could have engineered better stops if we’d chosen to implement mechanical switches on the S4/Pro…