Nomad is fantastically accurate and repeatable!

I was machining six identical components from .08" x .08" (2mm x 2mm) styrene bar using a 0.5mm flat endmill, for a model railroad bridge mockup. I had machined 5 of the 6 repeats when I got the dreaded Connect Cutter message in Carbide Motion. I already had the stock clamped on the spoilboard (I had machined a .08" wide by .07" deep trench in the board, and holding the stock down by a scrap of aluminum sheet in the middle area not being machined). After the necessary reboot of the PC and Nomad, I decided to try an experiment and went directly to Load Project. The Nomad machined the last part flawlessly. I’d already measured the homing repeatability at .001" or so, but relieved that the Nomad keeps the current machine zero point in non-volatile memory. 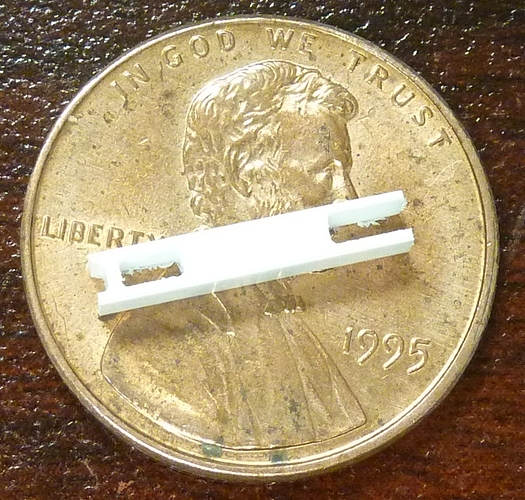 Continuing respect and kudos to the Carbide team, and thanks for a fantastic product!

Thanks for that Randy- glad to know it works well “in the wild”.

One bit of information, the zero is kept in your PC, not in the machine itself. If you happen to plug a different PC into the Nomad, the previous zero will no longer be valid.

oh yeah i have rescued probably dozens of jobs after reboots, power off, etc.
i try to rezero as little as possible

@dr_g, I’m coming from the background of a Tormach mill and Mach3. The Tormach’s homing (even with my customized “double-touch” routine) is not better than .003-.004" or so, so there have been times where I have left the machine and PC up and running for almost a week to get through a large job where I could not lose zero. (having machined off the original reference surfaces)

I am absolutely blown away by the fact that I can shut down the Nomad, shut down the PC, restart both and resume as if nothing had happened. It is just fantastic, the lengths the Carbide crew has gone to, to give us a product that is not only plug-n-play, but plug-n-unplug-n-play.

I can’t speak to that… I was an “early adopter” and my 1100 is a 3-digit machine (serial 128, which I like to refer to as 10000000b) and it probably doesn’t have a single component in common with today’s 1100’s, except maybe the ballscrews… If the 440 had been available in 2006 I would have bought it! All I wanted was something that had at least the envelope of my much-modified Sherline mill ( http://www.prototrains.com/shermill/shermill.html ) but that I didn’t need to fiddle with to improve.

I have some heavy steel machining to do for my next-generation lathe CNC mechanism, but after that I’d consider selling the Tormach, if anyone will have a 9-year-old machine… I have a bunch of postings on my Tormach and Feeler lathe on CNCZone under user name zephyr9900.

I was shocked that the probing on our Tormach 1100 could shift by .02" each run. I suspect it was more of a Mach3 problem because no switch could be that bad. We had a serial number in the 1000’s so we had a relatively early machine too. I"m sure the Path Pilot controller would make it a lot better.

A lot of people have negative things to say about Mach3’s performance and reliability (or lack thereof…) and not just on the Tormach, so it must be sensitive to installation and setup environment. I’ve been running Mach3 for 9 years now, and for a little over two years, I’ve been running my Tormach and Feeler lathe CNC conversion on HP t5720 thin clients with Mach 3.043.066. The t5720 boots off 512 MB flash drive (quickly) and has 256 MB RAM. I’m running at 35kHz kernel, and on the Tormach at 10000 steps/inch my rapids are 90 ipm which it does handily. I bought five surplus t5720’s for $20 each so I have spares. If I could run Pathpilot on the thin client I’d give it a try, but I’ve never had a glitch using Mach3. I haven’t done any probing however so I can’t speak to that…

But every time I shut down I need to re-establish machine zero so the Nomad wins hands down in that department!