Late night playing with the Nomad Pro. While waiting for materials to arrive from Carbide3D, I went out and got some small pine lumber to play with. I decided to write my son’s name on it so I created a simple .STL file with Tinkercad saved it, open in MeshCam and ran the Carbide Auto tool path. Selected softwood for the material and using square .125 cutters. The Name is only 5 mm in height. Easy cut I assumed.

I had the low profile vise holding the 3.5 inch x 3 inch x .75 inch piece of wood. When I went to Jog, I did rapid position, far left center. I then switch over to do manual X/Y placement and was slowly tapping the X to get closer to the stock’s edge when it then all of a sudden dropped Z like like a bomb. I was watching in slow motion in horror and looking at my computer screen to see if there was anything I could press it to stop it in it’s track but it went crashing into my vice. Once it hit the vise, about 2 seconds later it stopped dropping. Thinking back, I should have pressed the Nomad’s power button. Happened too fast. Anyways I was able to press the Z+ to raise it with no problem. I decided to home it and then zero the stock again. It went to cut the job and the spindle sounded fine. however, the name was suppose to be 5 mm deep. But it looked like it barely cut the surface.

His name is MAKAI with a star above the I. 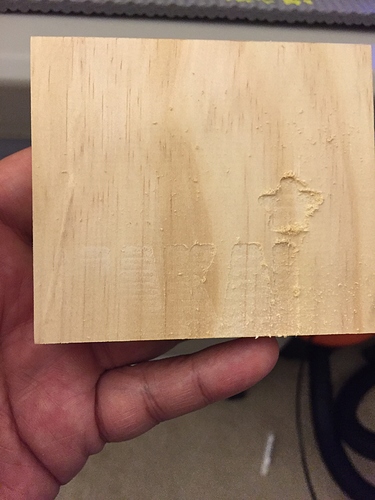 So I decided to put in a new piece of wood, started up Carbide Motion again. It tested for tool length, no problem. Then I Jogged -> Rapid XY Postion -> I wanted to do Center but I heard a weird noise. As if it didn’t want to move. I decided to start recording just incase I hear it again. I then move the cutter far left, no issues. Middle no issues.

I still couldn’t go back to center, so I figured let’s Home this thing and start over. But then It started making a grinding noise.

It eventually stops on its own but when I try to home it again it says Limit Switch Error.

Any ideas? I am still confused as to why Z dropped the way it did when I was tapping for X movement.

When a collision occurs - please take time to think about what you’re doing and avoid them at all cost - the Nomad is unaware of the collision and keeps on telling the gantry to move… the stepper motors continue to “step” but the physical position of the gantry does not correspond to the number of steps for a motion… the gantry isn’t where it is supposed to be.

If the collision “pins” the gantry, it may be unable to move in all three directions so all bets are off… steps can be lost in each direction.

The harder/faster the collision, the more steps lost and the further things are “off”. When a collision occurs, it is best to immediately power cycle the Nomad (which is also Emergency Stop (E-Stop)) and allow it to recycle the positioning and tool length. Start over.

Pretty sure you’ve got some version of this issue:

Was in the middle of machining a hardwood block, when all of a sudden the machine started going nuts making a loud grinding noise. It flashed that a limit switch had been hit before I hit the shut off button (but I wasn't near any sort of limit) When I turned it back on, and it asks me to home the machine, this is what it does I can move the carriage manually freely along the Z axis - there is no binding at all. Only when I turn on the machine and try to move the cutter does the sound star…

One of the wires leading to your Z motor has likely come loose, or broken altogether. Not sure about the Nomad Pro, but on the classic it’s a simple fix. @Jorge will have you sorted out in no time. Drop C3D Support an email.