Hey all, I’m new to CNC like so many others and I just wanted to get a general sense of how long different jobs and materials take. I’ve got a piece that’s about 50mm in diameter by 30mm tall. I’m going to be testing milling this out of a solid aluminum cylinder. Estimated time for one side of the project is 195 minutes for the rough cut and 48 minutes for finishing.

Here’s a pic for reference: 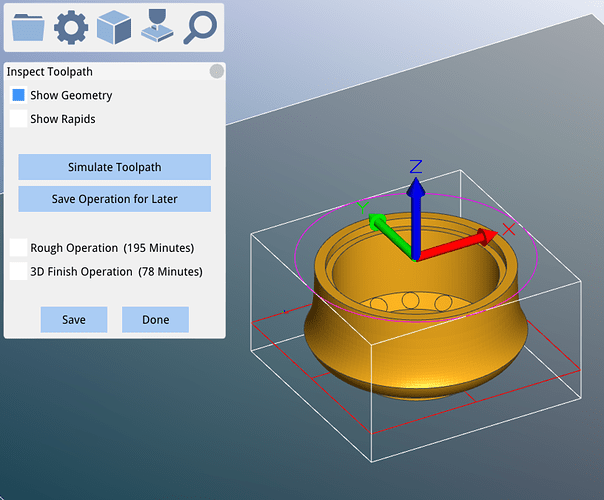 I just wanted to make sure that was normal or if I should be adjusting any of the settings. I’m running the pre-set aluminum toolpaths at the moment.

You re gonna want to set the feeds and speeds specifically and not take any defaults. 8in/min feed and 1in/min plunge with 1/8 in bit is the what the sheet says. Seems like with a depth of cut of 0.01" it would take quite a bit longer than what you have here, but I haven’t done the math yet.

Feeds and speeds are at http://docs.carbide3d.com under “support docs”.

In my experience, those feed rates will simply stall the machine.
I do .25mm depth per pass, and 200mm feed rate. plunge rate is .25mm. Any faster and my nomad stalls and makes scary noises.

This makes even simple aluminum parts take hours, but it does manage to make them very accurately.
Please note I am using 6061 aluminum. I haven’t tried any softer alloys, as they would not have the wear life required.

Thanks guys, I’ll give those parameters a shot. I did a test run with the current settings and it definitely felt a bit harsh on the machine. It was milling the aluminum, but it didn’t seem very happy about it. I’ll followup once I get a chance to try these settings.

If you use adaptive clearing (Fusion360) you can decrease your machining times dramatically. I did a test on an aluminum block and found that the parameters below work pretty well. You have to use a little coolant and clear the chips as you got but I was able to clear a 0.55in^3 pocket in 30 minutes while the estimate for the same pocket using conventional milling and the C3D federates was 78 minutes. It’s loud, but it works.
RMP: 9200
DOC: 0.063"
Cut Width: 0.018"
Feedrate: 20in/min
Plunge rate: 4in/min (Helical Spiral) 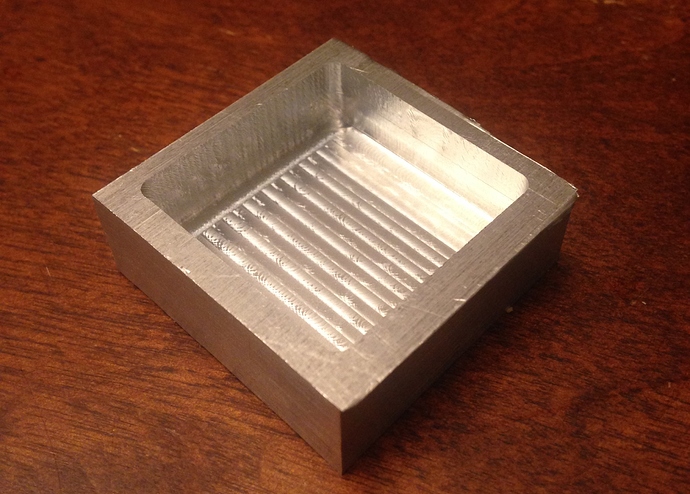 Wow, that’s pretty impressive. Are you using the included carbide endmill or did you upgrade to something else for this?

Out of curiosity, what software is being used in the screen capture?

That’s the beta for MeshCam 7. The current version crashes for me whenever I try to save G-code but 7 seems to work fine so far.

I’ve been playing with Fusion 360 adaptive clearing in aluminum on the Nomad too. I am just using the Nomad tools - dry, but doing my best to keep chips cleared. I’ve had good success with high feed rates but no matter what I do I am getting crazy amounts of chatter when I attempt a cut depth greater than 0.01in. It’s disappointing because I embarked on this experiment in an attempt to increase the depth of cut in order to use more of the endmill cutting edge rather than just wearing out the bottom 0.01in. From the looks of the surface finish in that photo it looks like you might have a similar issue, Remmy?

I’ve read a lot of comments suggesting the Nomad is likely to run out of spindle power before running out of rigidity but based on this chatter issue I seem to have the opposite situation. Any ideas what the weak link might be? Is it possible I am running into a stepper torque limitation, even though I don’t seem to have any skipped steps? Is there just not enough stiffness in the belt drive? (Though, I note Remmy has a leadscrew drive Nomad Pro.)

I used a couple of different depths when cutting this pocket and did see some chatter when cutting at 0.125" DOC, 0.015" stepover and 25ipm federate. After backing the settings off a bit I didn’t see chatter on the last couple of passes for this pocket. The coolant was important to prevent chatter and spindle stalling so you might want to try that with your setup.

I’m also planning to do a test later this week cutting twice as fast and half as deep so see if it reduces the noise. To me, the extra noise is worth the decrease in cutting time but my wife doesn’t agree with that assessment =).

Hey thanks. You’re probably right about the coolant, but since I have an indoor setup I really don’t want to mess with that, so I picked up an endmill advertised for dry machining aluminum (Destiny Tool Viper with the MoS2 dry film lubricant coating) and it helped a lot. I still haven’t gotten everything quite dialed but am getting decent cuts (and not overly loud) at 0.05" DOC, 0.04" WOC, 6800rpm, 14ipm. I’ve also tried doing some full depth finishing passes at (for this test cut) 0.2" DOC, 0.005" WOC and when it works, the results are fantastic, but I haven’t yet found speeds and feeds that will keep that pass chatter-free 100% of the time (and when it does chatter it’s bad).