I’ve been trying to figure out how to improve the life of my tooling, specifically the 1/16" carbide flat end-mills, when doing extensive work in 6061 aluminum.

The repeated case of failure I’m experiencing is aluminum welding on to the tool, leading to it eventually snapping due to rubbing instead of cutting, but when I try to take more aggressive cuts that are still within the rated 0.07HP/50W we have with the stock Nomad883 spindle, the axis motors & belt-drives aren’t rigid enough to handle it and it misses steps/jutters and breaks the tool that way instead.

I’ve tried using a few coolants, settling on soy cutting oil as the best option to date. I’ve also tried just dry-cutting with my down-draft prop-nut to blow the chips out, which works a whole lot better without a coolant since it generally blows the coolant around making a mess if I try to do both at the same time—unless I’m slot cutting and putting the coolant directly in the slots.

I’ve adapted from conventional tooling strategies to adaptive clearing strategies which definitely helps clear the chips and reduces re-cutting and general “chip-stirring” done by the tool, while also reducing the time needed for the same kind of operation in my test case by roughly 40%, but I’m still seeing build-up on the tool that’s going to kill it within a complete runs of this part.

a) So with all that said, does anyone have any tips & tricks for what’s preserving the life of their cutters and not rubbing/welding aluminum, in light of the torque & rigidity limits on the Nomad?

b) Can anyone comment on whether 6013 cuts sufficiently better than 6061, or if there are any other alloys that do cut better with less gumming-up? The application needs moderate strength, otherwise I’d just say to hell with it and switch to plastics.

I have an SO3 and I’m considering running the parts on that instead since I know it’s got the torque to run closer to the calculated ideal feeds/speeds on the tooling, but I wanted to check around before I get started on that option, because I know I’ll want to do a belt-upgrade before I get into it.

Interestingly I have had nice chips with a 2 flute 6mm end mill and no obvious rubbing but the aluminium plate I have been machining has become very hot to the touch… But the end mill is cold after machining. Does this mean that rubbing is occuring?

you’re going to get heat in any milling operation, that’s just part of the deal—the concern is when the heat isn’t being carried away by the chips, and it’s either being transferred into the tool (worst option) or left in the material (not good either) as either condition decreases tool life and machining performance and properties at the machined boundary, respectively. What I’m talking about though is when there’s enough friction in the cut that it’s causing the aluminum to go gummy and weld itself to the tool like this: 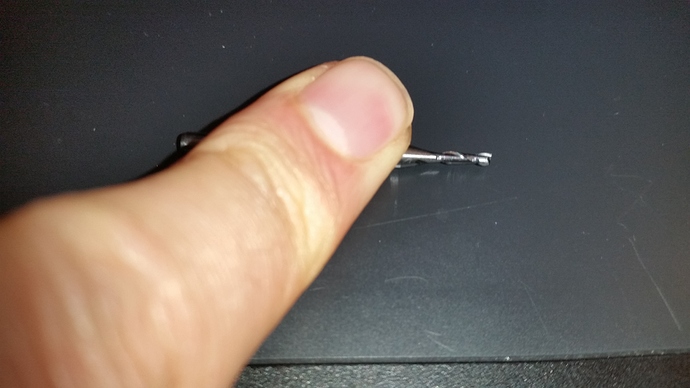 You can see a clear line where the aluminum has been sticking to the carbide, and the surface finish changes, at the top of the depth of the cut.

What tool brand, coating (if any), and feeds/speeds and cutting/axial-depth & step-over/radial-depth of cut are you using with your 6mm cutter?

Yeah, it’s a difficult issue. I’d think you could get better life out of them by going shallower and as fast as the machine could handle with out deflecting or choking. Obviously as you go shallower you will run into chip thinning but hopefully you can increased feed enough to make up for it. You could also buy a little forgiveness with ZrN coating.

So up to a point you can get away with the heat it is only when it starts to melt the aluminium slightly that lubricant/coolant may become mandatory on the shapeoko and nomad to prevent over heating and gumming up of tools?

The key that I have found isn’t so much cooling (although it does help) but chip clearing. The only time I’ve had chip weld issues is during deep slotting operations when the endmill starts re-cutting chips. A prop nut probably isn’t enough to sufficiently clear chips…I recommend compressed air (or canned air if you don’t have access to a compressor).

As far as making aggressive cuts, the spindle hp isn’t the only factor, you have to take into account the stiffness of the machine. Whenever I run a new material through my machine, I setup a test cut on some scrap to help figure out my speeds and feeds so that I can balance material removal with tool life, and surface finish.

The whole point of adaptive tool-path strategies is that they reduce and level out the amount of tool engagement during cuts and also give the chips a better opportunity to clear—except for the initial ramp-in and a few clean-up moves in tight corners you’ll never be engaging more than a specified radial engagement, and with each “swipe” of the cutter into the stock it does a trace out to let chips eject. That’s when the prop-nut can clear things out.

I agree that compressed air is likely needed, which is why I’m going to be moving the Nomad down to the garage/shop at some point and getting a California Air Tools compressor to add blow-out for both the Nomad & my Shapeoko3, but I’m also working on a two-part compressor turbine version of my prop-nut design to create more pressure in the air jet. Right now due to the shortcomings in the rigidity department I’m not able to take cuts that utilize even the full 50W of the spindle’s rated capacity, so I feel like there’s likely a bit of headroom for the turbine if I keep it small. We’ll see if it helps