I’m making some fun little targets for a friend’s kids bow and arrow set…super simple project. They’re only about 8 inches across and on each target I’m pocketing a couple of the circles, only 1/8" deep. See my attached image. When I set up the pocketing toolpath it was saying it was going to take like 18 minutes when, based on other projects I’ve done it seems like this should only take a couple minutes at most.

When I look at the toolpath lines I see some short lines and dashes, and then when I run the file it “pecks” at the material a bunch of times, kinda like it’s doing a v-carve, then it’ll do a “normal” cut for a couple inches around, then back to pecking some more before finally making full circular passes.

So, kinda weird, and I’m hoping somebody might be able to explain what I’m doing wrong on this. I’ve done plenty of pocketing before, so I’m confused, haha!

Thanks for any help!!

Can you post the c2d file ? my bet would be rounding errors due to the width of that circular pocket being an integer number of times the stepover you chose. If you change the stepover slightly, do the dotted lines disappear ?

@Julien wow! so I changed the stepover from .125 to .120 and that seemed to make a huge difference! Attached image. Those lines in the image are simply where the end mill is moving to the next pass, correct? 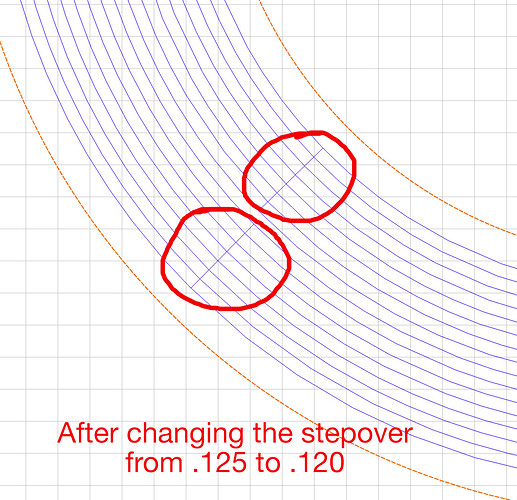 Seems like making that change was the solution, thank you so much!! So for somebody like me, who isn’t somebody like you (LOL) would there have been anything specific I could’ve looked for to see that’s what the problem was? What about slightly changing the size of the circles?

Thanks again, I really appreciate the help!

Those lines in the image are simply where the end mill is moving to the next pass, correct?

Yep those are fine

would there have been anything specific I could’ve looked for to see that’s what the problem was?

Nope, ideally CC should take care of that for you and round values ever so slightly differently, but it’s a complex problem (on this circular pocket it’s easy, but on arbitrary geometry, not so much). @robgrz would be in a position to tell whether that is fixable in future CC release.

What about slightly changing the size of the circles?

That would work too. The problem is only when the geometry is such that the toolpath requires exactly an integer number of times the stepover to cover the width of the pocket/shape. When this happens, the limit between “let’s do one more pass” and “no, that’s just enough” is so small that rounding errors in the computations can lead to those artefacts, because rounding errors are not exactly the same everywhere depending on X/Y coordinates. Anyway, there is no trick, you just need to know about it and then use the workaround

@Julien awesome! Learned something today! Thanks so much!!