Powerful air stream coming out of my Nomad (?) 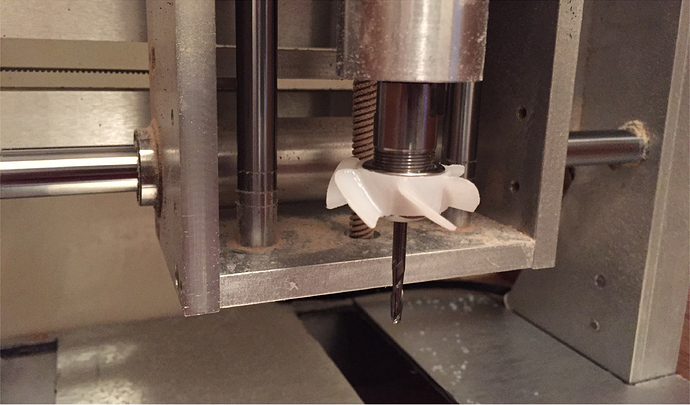 Comprehensive video tutorial coming soon! Thanks to user @CookieMonster and the great Apolloness for their help! 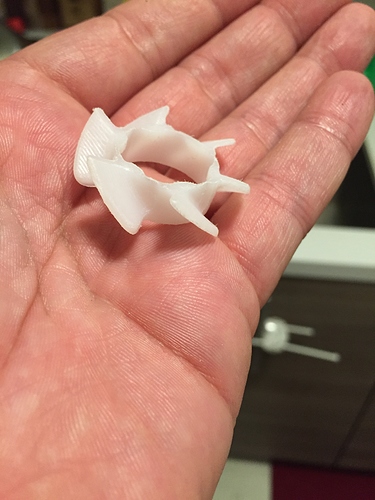 That looks really good, @Darren. I might need to try it myself…

I have been wondering about these nut-mounted fans though. Many ER nuts for 10krpm and up are themselves balanced to minimize spindle vibration. These fans, though much less dense than the collet nut, have a larger radius and so any imbalance they might create would be magnified. I wonder if there is any significant effect on the spindle balance?

Interesting. Makes perfect sense but I actually used the fan on a few cuts so far and no issues at all with balance.

@Randy ya, it was really a breeze to use.

The original stl was made by @CookieMonster and @ApolloCrowe modified it a bit. I’m sure one of them would be happy to provide their stl!

I want to point out that using something like this when machining wood can INCREASE your exposure to lung damaging particles. CNC machines generate a great many small particles (NOT “sawdust”) - the 0.3-5 micron range are the nasty ones.

Failing that, wait a few minutes after the job is done and then vacuum the air a bit first, then the visible stuff. As always, all vacuuming should have a 0.3 micron HEPA filter; a dust cyclone is a worth while optimization.

We’re trying to get someone who posted a dust head - the tool is in the middle of a brush that has a vacuum going - to post his STL files. Picking up the particles while they are made is even better than picking them up later.

Combine the propellor with a dust head and things would be better yet.

@Randy points out that the Moment Of Inertia (MoI) can be large and any imbalance may cause vibration, vibration that can possibly affect the spindle wear and the machining itself.

It is very important that these device are very uniform in every direction so as to minimize any imbalance. Also, be sure that they are attached in a to the nut such that they are “level” with the nut.

if we’re going to get serious about checking, we’ll need to know the characteristics of the device. I can do the math… but a simple measure would probably due. Measure the runout with and without the propellor attached. This would have to be done with an optical measure since the measurement has to be done at speed.

I’m guessing that these devices are only a few grams in weight, are pretty symmetric because they are computer generated, and can be “leveled” the collet nut by eye with pretty good precision. If that is the case, a back of the envelope says it’s “ok” - but don’t make them too heavy.

Interesting read. I usually keep the door open to vacuum at constant intervals. Should keep the door closed from now on. I like the idea of the dust head better. Had been trying for a while to design my own and got partly there. The fan is a very clever simple idea too. Hopefully these could be available to purchase. I love the idea of milling my own but would hate to use something that, because of my inexperience, would create problems in the long run. Love this community and how helpful everyone is with each other. I haven’t had much time lately to continue my learning and would love to find ways to follow tutorials, in various levels of difficulty. That would allow people like me, learn with small projects that teach specific things, and end up with something tangible to feel good about.

Great looking part, and great design by @CookieMonster.
HDPE is difficult to machine, but as you can see in the photo, the Nomad delivers.
Great work Darren.

Also, let’s not forget - I am a CNC noob. I got my nomad in January and for the most part have been cutting simple 2d shapes (wooden teethers). I got the flip jig about a month or so ago.

The flip jig and Meshcam make this stuff dead simple!

If someone doesn’t doesn’t post the CAD and CAM for a dust head along with the plans to modify the enclosure for a vacuum connection - at low cost and low complexity - I plan to. I’m just weeks away from taking possession (excitedly awaiting that email!) of my Nomad.

If my eye are not deceiving me we’ll have to have two variants of the dust head - it looks like the spindle position differs between the Nomad 883 and Nomad 883 Pro. That will be easy to deal with.

I’m very concerned about air, eye and sound safety. The Nomad is wonderful in that it comes with an enclosure so eye and sound safety is essentially covered. Air safety with CNC is serious business… lung damaging particles are all too easy to generation (when machining wood) and small enough that we do not see them. I little bit of care, a lot cost, can prevent a great deal of problems later on.

Using a impeller and a dust head may prove very effective combination. I plan to experiment and report my results. On large CNC mills/machines we’ve got 4 or 5 inch vacuum connections and a huge amount of vacuum. The Nomad is small enough that the tubing will limit the vacuum; the impeller could very well ensure the necessary “lift” to obtain very good safety levels.

A well designed CAD model for the impeller is the hard part of the project. @Darren, can you post your CAD in STL format such that it using zillions of triangles (1 degree) will ensure the best possible machining outcome?

I have access to 5 axis CNC machines so I can machine mine optimally. Using Nomad with a flip jig will prove an interesting study in tradeoffs. I see about posting the results (impeller machining is well known trope for 5 axis machines, see YouTube for details).

@mbellon I would love for the vacuum enclosure to be a learning project tutorial. Would gladly help in any way I can. I have started down this road with a design that had me learning CAD and milling. Using a regular dry/wet shopvac, pvc and Loc-Line parts. Nothing fancy. Designed a bracket that attached my contraption to the spindle head.

Let’s do this! We can work together offline and post the results publicly.

I know we were also talking about a downdraft table - I wonder if that would be an option? I have no idea where to start with this but I’m happy to work with some design folks to figure it out and post up a video tutorial!

If that is what you’re thinking, vacuum holding does not affect air quality to speak up. The vacuum there pulls a sheet of stock down to the bed. The stock blocks the vacuum so the air quality is not affected.

Vacuum holding requires a strong vacuum, one large enough to hold the smallest piece one is going to cut. This type of fixturing is very common when cutting large pieces - think book shelf manufacturing. The vacuum has be big and/or the area of the piece exposed to the bed has be sufficiently large enough.

How to make a vacuum bed is well understood - it would take me a few hours to whomp on up - but I would be concerned about the noise that the vacuum equipment would make to make it very useful. Definitely something that can be thought about. Hmmm…

I think @Darren is talking about a downdraft extactor built into the Nomad base. It’s something about which I’ve been thinking myself. When I worked in biotech we used downdraft fume hoods. As long as there was 100 ft/min airflow at the hood opening, it was considered safe becuase that velocity will overcome diffusion of molecules outwards. The fume hood doors had a stop built in to limit the front opening during operation (to ensure the required airflow velocity), of course we could manually bypass the stop for loading and unloading stuff from the hoods.

But a good downdraft at the sides of the base together with an air inlet at the front above the table, could act as a dust extractor for the enclosure as a whole.

100 CuFt/Min is well within what most shop vacs can pull. The high end stuff (e.g. Festool) is also rated that or higher.

Pull a vacuum from underneath. Yes, that is an interesting idea. It would certainly handle any of the nasty particles quite nicely - and be relatively non-invasive to the enclosure.

It’s probably a good idea for the Nomad to sit on a piece of rubbery material to isolate vibration. That would act as a seal for the down draft.

Up, via a brush head and a tube (the very common CNC dust collection method), would have a chance of picking up the big AND nasty stuff while it is being created. An impeller inside the brush to ensure lofting could be a very effective approach.

I admit a bias to the dust head approach - I’ve used it so many times for so many people, myself included - but those were large machines where down was impractical. The Nomad is small enough that down could be done easily.

I would be a little bit concerned about the accelerated accumulation of the particles - nasty or otherwise - underneath the Nomad. This may affect the bed travel and the nasty particles will accumulate in the crevices - exposing people to the particles when one has to clean underneath. Inside a house one has be extra careful; thankfully, it isn’t expensive to be really safe. Hmmm…

Either way, the vacuum would make opening the enclosure “more interesting”. If strong enough, you’re idea of a cut off microswitch would be necessary.

When my Nomad arrives (REAL SOON NOW) I will stare at for a long time, do some experiments, and think about both approaches. I plan to make the CAD/CAM, parts list and directions available for anyone to follow… unless someone else does it first!

A small point, Mark. For the fume hoods the criterion was 100 ft/min airflow velocity. Multiply that by the opening in square ft and you would arrive at the cfm volume flow necessary. With the fume hood door closed to the “working” position (reasonable gap for reaching in and working) the air was fairly whistling through–or maybe that’s when the door was closed to minimum gap–it’s been a few years… It was still better than “bunny suit” and supplied air hood, which I also needed to use on occasion…