Problem with Geometry Support in MeshCAM

So, I’m making forays into 2-sided machining, and slowly making progress. But my last two attempts have produced something anomalous, and I wonder if anyone else has seen anything like it.

So, I tried carving this little guy twice: 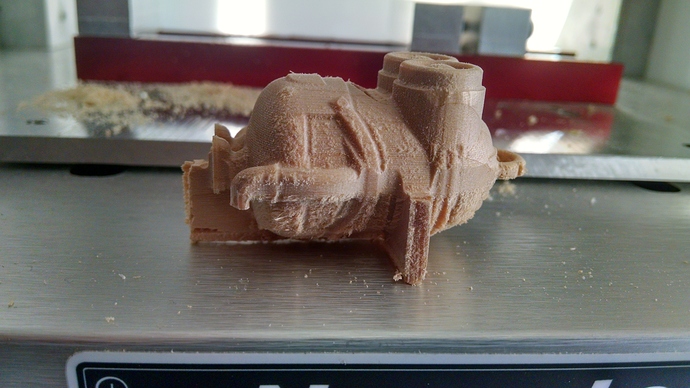 But as you can see, the supports are much larger than what I set up: 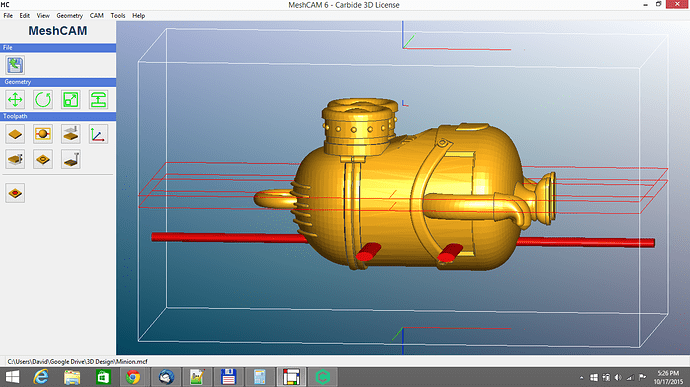 (I just realized, that screenshot is from an earlier version with more supports than I ended up using, but the support dimensions as shown in MeshCAM are correct to the ones I actually used).

I didn’t have this issue on any other models that I’ve tried doing 2-sided machining on. Could this be caused by the model, or could I be causing it somehow in the way I’m setting up the supports? 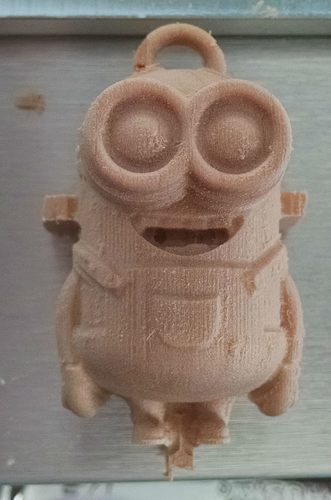 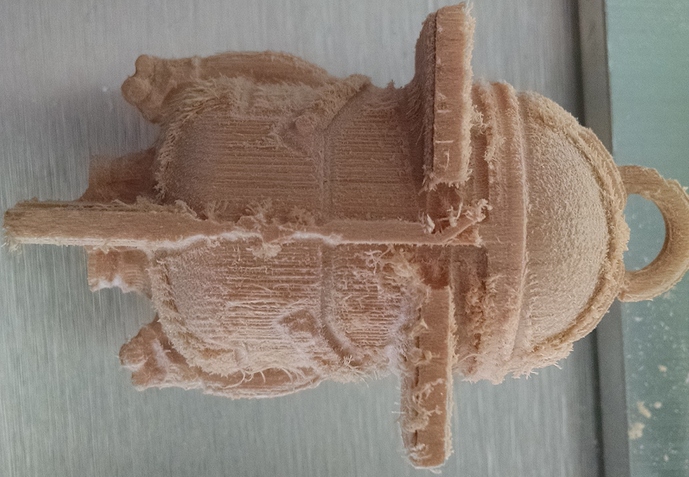 Assuming you are doing the machining with a ball-end mill, and place the supports on the “parting line” around the part (that might mean 2 or 3 trips into the support dialog to specify different vertical positions), you can leave max depth at the bottom of the stock and choose Machine geometry plus with a margin of just less than half your tool diameter (maybe .120" for a .250" cutter). The cutter will machine as deep as the widest part of your geometry, and not quite fall off the edge. I have used that technique a lot on irregular workpieces.

Yeah… the supports right at the Z mid-point interfered with some of the details, so I experimented with lowering them slightly. When that generated the super-thick supports, I tried moving them to the bottom of the geometry, with no real change. I could see why the “shadow” of the supports could create the big supports when I set them at the botom of the geometry, but I got the same effect when I only had the supports set 2-3mm below the parting line.

The roughing was done with a .125" flat mill, with the finishing passes done with a 0.063" ball. The max-depth setting overlapped by about 2mm past the parting line – I couldn’t do full depth, b/c the stock was too thick for my cutter to reach all the way through.

If you don’t put the supports where they can be reached from both top and bottom, you will get the unmachined areas.

Here is one support with the machining from the top side to its max depth. The green lines are where the cutter can reach. 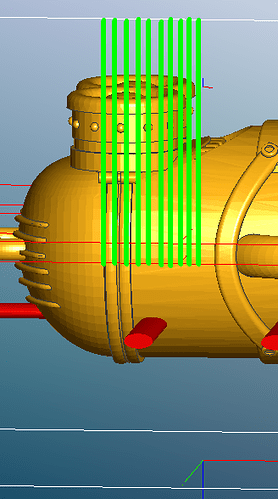 Now you flip the stock over and machine from what was the bottom. The pink lines are where the cutter can reach. 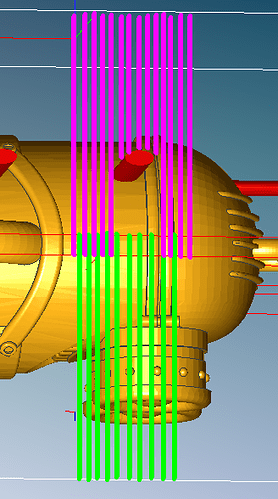 There is the area (now) below the support that was too deep to machine from the top side, and now is shadowed by the support from the bottom side, so it is not machined at all.

That looks about like the effect shown in your photos…

I see what you’re saying. I wish I had shots of the test that had the supports much closer to center.

Oh, well. Best thing to try is running a fresh take on that model, with the supports dead-centered, and see what happens.

Well, it took a while to find the free time, but I’d say you were correct, Randy. A version with the supports at the center of the geometry’s Z dimension avoided this problem entirely.